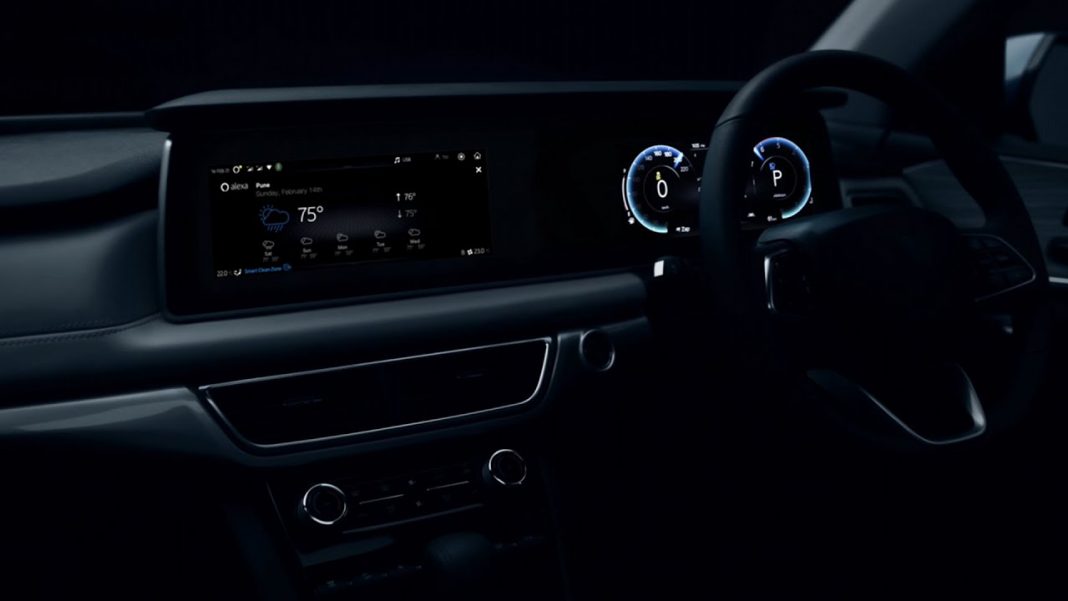 Mahindra & Mahindra kicked off the teaser campaign for the XUV700 a few weeks ago and already a host of new features including some segment-first ones have been teased. The centerpiece of attraction in the cabin of the XUV700 is undoubtedly the twin-screen layout as we previously informed and the teaser reiterates the same.

The landscape-oriented above 10-inch touchscreen infotainment system and the TFT gauge cluster are aligned in a single cluster, unlike anything we have seen in Mahindra models and it will be a key differentiator to take the fight firmly to rivals such as Hyundai Alcazar, MG Hector Plus, Tata Safari and other seven-seater upmarket SUVs.

It must be noted that the layered dashboard has a light coloured theme except for the top layer and the seats are done up in light shade as well along with premium metallic accents. The body-hugging seats are brand new and the headrests are adjustable. Hello AdrenoX features enables voice command features as it connects to Alexa to open the largest panoramic sunroof in its segment dubbed the Skyroof.

The Mahindra XUV700 will make its global debut likely in the coming days before reaching dealerships around October 2021. The previous teaser videos gave away the presence of booster headlamps, personalised safety alerts, pop-out smart door handles, air purifier and much more. The SUV will be offered in six- and seven-seater configurations and the exterior was completely uncovered today and you can read about that in the link here.

It will be powered by a 2.2-litre mHawk diesel engine producing around 185 hp and a 2.0-litre mFalcon turbo-petrol developing around 200 hp. Both will be paired with a six-speed manual transmission as standard while a six-speed torque converter automatic transmission will be an option with an all-wheel-drive system in the top-end variants.