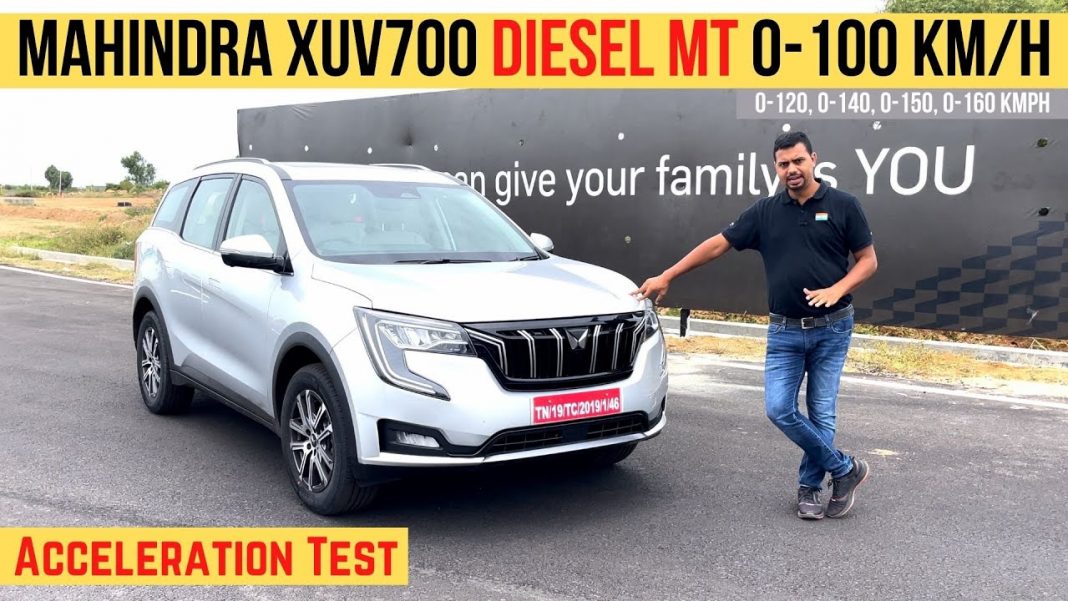 In our Mahindra XUV700 acceleration test, we have comprehensively tested the off-the-line capabilities of the SUV

Mahindra & Mahindra has commenced production of the customer units of the XUV700 and bookings will start across dealerships in the coming weeks. We have brought you comprehensive coverage of the XUV700 from its media drive – segmenting them into different videos – and here we have the acceleration test video of the diesel manual variant.

The six-speed automatic variant of the Mahindra XUV700 is torquier by 30 Nm at 450 Nm. The XUV700 has an abundance of torque at its disposal and the petrol engine definitely worth the mention for its off-the-line characteristics for an SUV weighing around 2,000 kg. Without further ado, check out the video linked below for the detailed acceleration test:

The Mahindra XUV700 can be had as either a five- or a seven-seater and currently, prices of only a handful of variants are out and they are highly competitive – packed with a long list of features. The five-seater XUV700’s prices start at Rs. 11.99 lakh for the base MX petrol while the entry-level MX diesel costs around Rs. 12.49 lakh.

The AX3 petrol is priced at Rs. 13.99 lakh and the AX5 petrol carries a sticker tag of Rs. 14.99 lakh (all prices, ex-showroom pan India). The prices of the seven-seater version of the Mahindra XUV700 will be revealed in the coming weeks and they are expected to be competitive against rivals such as Hyundai Alcazar, MG Hector Plus, Tata Safari and others.

The base MX petrol is powered by the same 2.0-litre turbocharged four-cylinder mStallion petrol engine with similar power and torque figures that can be found across the range. It generates a maximum power output of 200 PS and 380 Nm of peak torque – the most powerful in the segment. The powertrain is paired with a six-speed manual transmission or a six-speed torque converter automatic unit.