Mahindra XUV300 will go on sale in the middle of February in India; boasts several segment first features with powerful engines

Mahindra & Mahindra will be unleashing its first brand new vehicle of the year in the middle of February as the XUV300 is waiting to be launched with much anticipation. The homegrown automaker has today announced the commencement of the XUV300’s bookings across dealerships as well as the brand’s official website.

The XUV300 draws several design influence from its bigger sibling XUV500. The Cheetah-inspired styling as Mahindra claims is indeed attractive with a sharp front fascia boasting sleek projector headlamps and flowing LED Daytime Running Lights that run till the bumper and join at the fog lamp housing. Four horizontal strips positioned in the bumper and aluminium skid plates add extra dynamism to the compact SUV.

The Mahindra XUV300 is based on the X100 platform of the SsangYong Tivoli and thus the overall edgy profile is reminiscent of the Korean cousin. However, big similarities with the Tivoli can be seen inside the cabin. Mahindra aims to make a huge impact in the sub-four-metre SUV segment with the XUV300 having tried its best with three other ladder frame SUVs like Quanto, NuvoSport and TUV300. 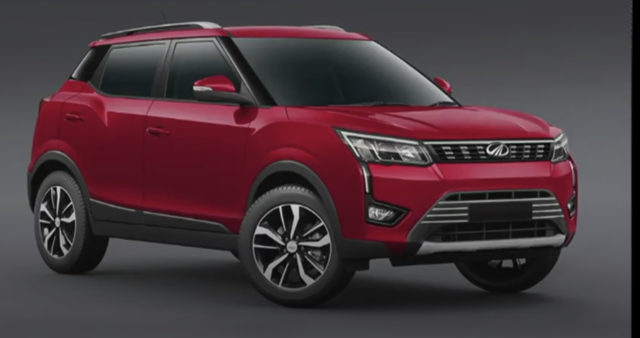 Unlike them, the XUV300 has a monocoque chassis and is packed with several segment first features to have a competitive advantage over its established rivals such as Maruti Suzuki Vitara Brezza, Tata Nexon and Ford EcoSport. Mahindra has confirmed that the XUV300 will be available with petrol and diesel engines upon its market entry.

The 1.5-litre D15 four-cylinder diesel powertrain that made its debut in the Marazzo MPV produces 123 PS and 300 Nm. The 1.2-litre turbocharged petrol unit, on the other hand, develops 200 Nm and its power output has not been revealed yet. The torque outputs are best-in-class, and they are expected to be initially mated to a six-speed manual transmission.

Mahindra could introduce an AMT at a later time to appeal for wider set of customers. It comes equipped with segment-first features like seven airbags, dual-zone automatic climate control system, and disc brakes on all four wheels. Other significant equipment are Electronic Stability Control, Cruise Control and front parking sensors, along with dual front airbags, ABS, LED tail lamps and four power windows as standard.

The XUV300 will be sold in W4, W6 and W8 variants besides the optional W8 (O) range-topping variant with added technology and safety features. Expect the price range of the XUV300 to be around Rs. 8 lakh to Rs. 12 lakh (ex-showroom).