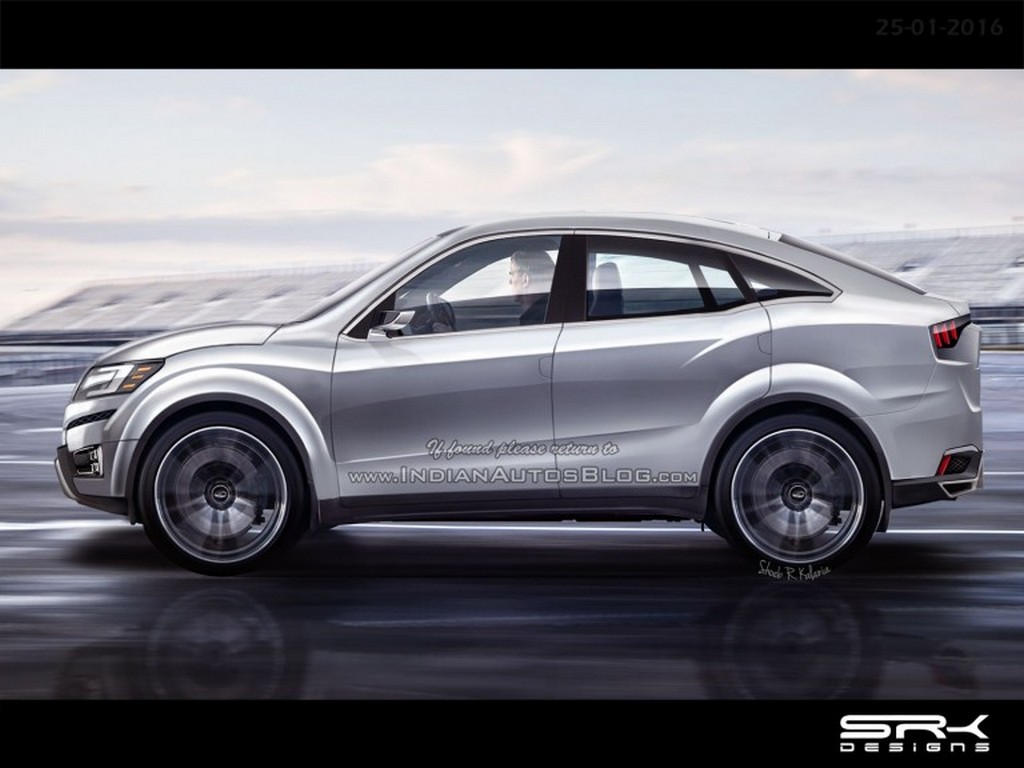 Mahindra and Mahindra released the design sketch of an all-new concept yesterday. Dubbed as Mahindra XUV Aero Coupe concept, it could preview a flagship Utility Vehicle for the Indian manufacturer positioned higher up the XUV 500 model. Indian Autos Blog has come up with a rendered image of the teaser sketch depicting the Coupe concept that is about to be unveiled at the Auto Expo 2016 in a few days’ time hosted at Greater Noida.

The rendered picture clearly indicates what the design sketch of the Aero Coupe SUV was all about. Rumoured to be based on the XUV 500’s design language, it comes featured with an aerodynamic obsessed body with several creases and sharp edges. The overall shape of the SUV concept is in accordance with its moniker whilst the coupe-ish roofline lends similarities to the Mercedes GLE Coupe and partially to that of the BMW X6 M model. It possesses sharper outlook and has a compact tail-end with edgier boot. The bump on the front quarter panel extending from the curvier front fascia resembles to that of the XUV 500 with flared wheel arches and strong shoulder lines stretching to the rear in an uppish angle. The bumpers are prominent with a wider windshield up front and slimmer horizontal tail lamps housed at the back.

You could quite easily visualise the decked rear diffuser in the original design sketch which helps in providing substantial downforce by regulating the airflow underneath the Aero SUV concept. Reported to be developed solely by Indian designers, a design studio will be established at the Mahindra’s pavilion to showcase the philosophy behind the design of the concept at the Auto Expo.

The details of the engine powering the concept could be the same found on the XUV 500: A 2.2-litre four-cylinder turbocharged mHawk CRDe diesel mill pumping out 140 hp of maximum power output at 3,750 rpm and 330 Nm of peak torque at 2,800 rpm. Driving the front wheels or all four wheels is a six-speed manual or speed-speed automatic transmission. Since Mahindra downsized the 2,179cc diesel engine into 1.99-litre mHawk unit to become suitable for driving in Delhi-NCR, we suspect it could be the powertrain Mahindra might equip the XUV Aero Coupe SUV Concept with at the motor show.
Source: IndianAutosBlog