The customisation job is based on the facelifted Mahindra XUV500, which makes it one of the only few modified examples of its kind and probably the vehicle lounge vehicle based on the Mahindra XUV 500. Mahindra has named the vehicle Moonraker and it does look like it can do an amazing job if it reaches a terrain similar to the moon.

The vehicle looks very different from the stock version yet there are many similarities between the modified example and the stock vehicle which keeps the XUV’s DNA alive. The vehicle gets an aftermarket steel bumper at the front that gets integrated LED multi-pod lamps.

There are dune lamps mounted on the roof of the vehicle that further makes the XUV 500 more capable for the night driving. The front grille has been updated with a more aggressive looking one. The Mahindra XUV 500 Moonraker also gets customised body moulds all around. 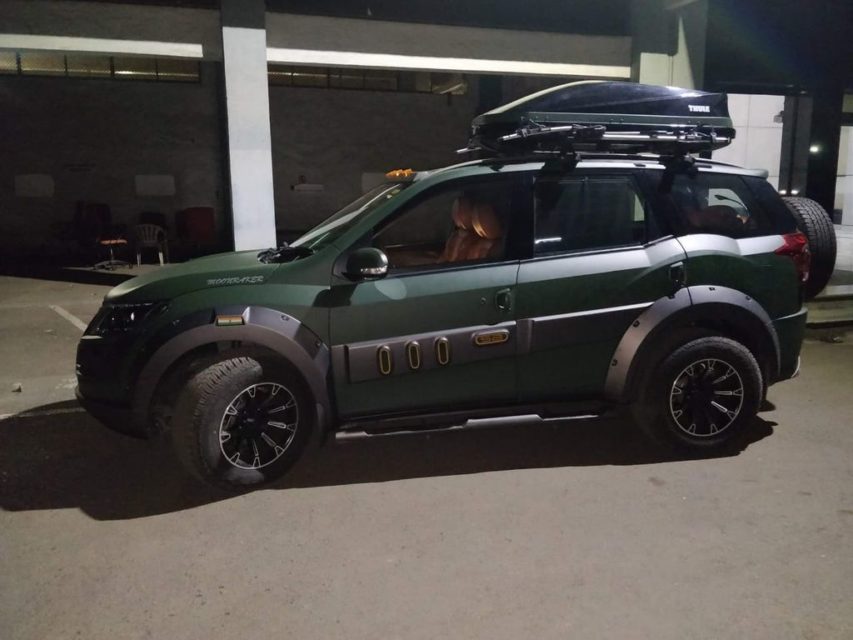 The wheel arches and the side body are made to look extremely good with the aftermarket wheel arches. The vehicle also gets aftermarket alloy wheels and thicker mud terrain tyres that add an extreme stance to the XUV 500. The Moonraker has been designed for long distance touring and is equipped with a lot of equipment. The third row has been removed and new electrically adjustable seats have been put in place.

The upholstery has been updated with Nappa leather and even the door trims get leather upholstery. The interiors get a smart TV, a personal refrigerator, 12V charging ports, USB charging ports, Rolls Royce inspired roofline, PlayStation 4 system, live streaming system, and WiFi. It also gets a 230V socket that can be used to charge devices like laptop and camera. The engine of the vehicle remains stock. Mahindra has not announced the price of the vehicle yet but it is expected to make an official unveiling soon.