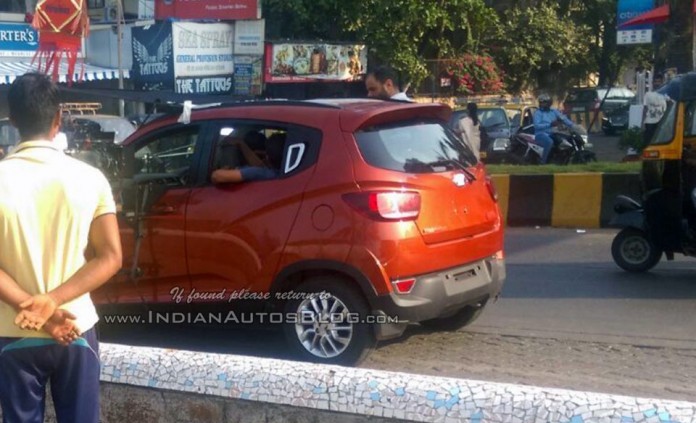 Mahindra XUV 100 Spotted Un-Camouflaged in Mumbai at the wee hours during the TVC shooting, launching in 3rd week of January

Mahindra XUV 100 or called as S101 has been spotted since last year for almost every single day till date. The most spied product awards as always go to Mahindra indeed. Even in that aspect it has been competing with Tata too. Anyways back to the new and highly awaited SUV from Mahindra which is all set to be launched and has been with very little camouflage, at Carter road in Bandra, Mumbai.

Mahindra XUV 100 will get a new 1.2l 3-cylinder petrol engine and the 1.5 3-cylinder diesel engine which has turned to be quite a impressive motor from Mahindra stable after the 2.2l. Here in the S101 it should have 100 PS of power considering it rivals will have the same and they have the same such as the Ecosport. Gearbox will also include an AMT gearbox and a 5-speed manual gearbox. After the success of the TUV 300 and that is mostly because of the AMT gearbox, Mahindra will most probably make the AMT gearbox available. Cosmetically the car does look quite a pretty looking vehicle with small dimensions and yet being a proper SUV as the stance is higher. The car is sub 4-meter SUV and has a lot of competition to compete with as it finally has a monocoque chassis underneath. We were to first to tell you that the XUV 100 will have Chevorlet Beat alike top mounted rear door handle which is easily spotted here. The XUV 100 also gets cool muti-spoke alloys along with orange scheme from its big brother XUV 500. What remains unknown for now is the price, what kind of features will make it onboard along with petrol engine specifications. Expect Mahindra to price even better than the TUV 300 which should make this car a proper blockbuster for the company.

The demand for these kind of vehicles is on the top and the brand has a rich heritage of selling SUV’s. Mahindra has been selling only and many SUV since a very long time and stands undisputed when it comes to sales of SUV in the domestic market.