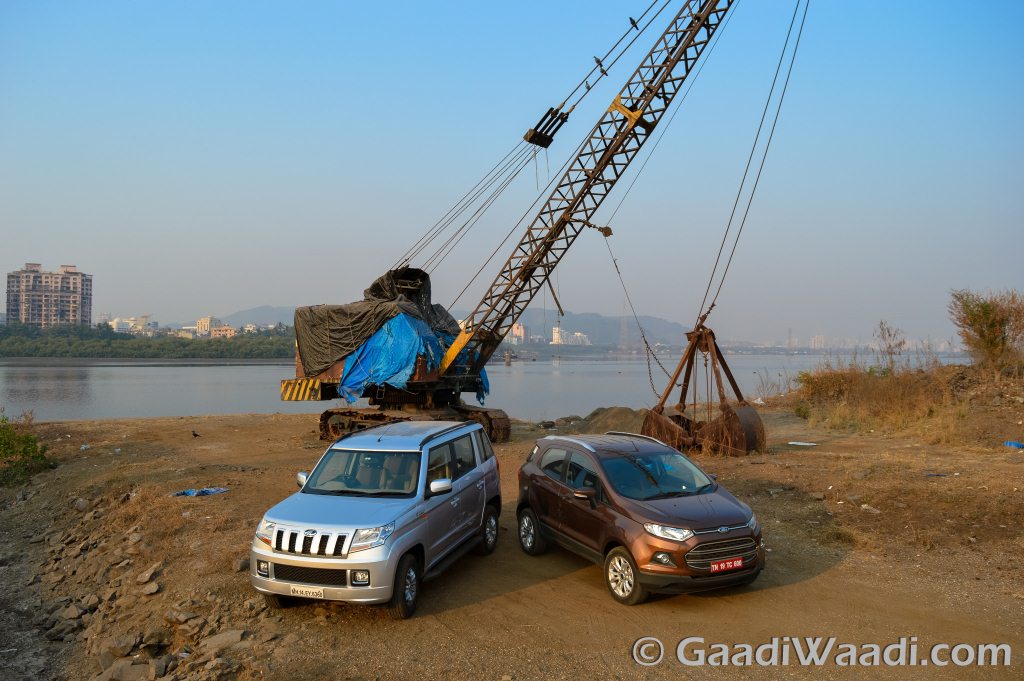 The Compact SUV segment is defined in various ways in our market ever since the launch of the Ecosport and Duster happened. Even the Creta is considered a compact SUV despite above four meter category. Reason is because we have been used to SUV, which are big bulky and highly old school, large type of machines with high-capacity oil-burner engines.

SUV’s like Safari and Scorpio have been the thing that we had only options. Now the compact SUV is showing signs of growing as Mahindra is all ready to come into the market with a smaller SUV as well. To start with, it has come with the TUV 300 and to rival it the Ecosport has been standing still for quite some time with great sales and stories of ownership around it. We put them head to head out to tell you which SUV feels better and which suits you the most. 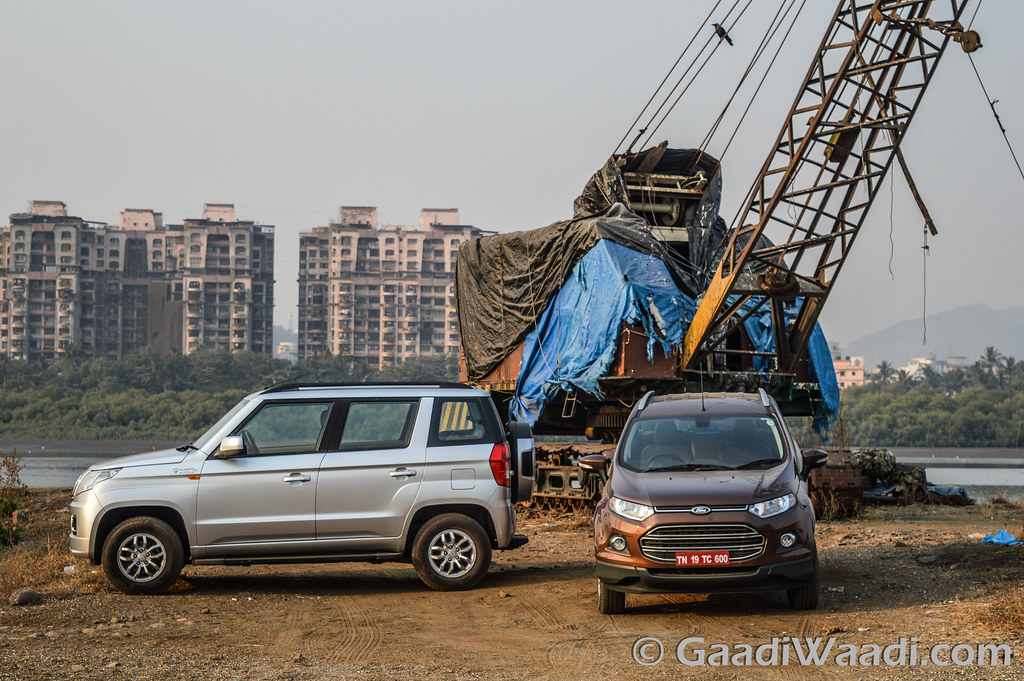 Styling wise both cars have a good presence on the road. TUV 300 has double the presence, though, and grabs a lot of attention, especially rural areas and Tier 2 cities. Pick up truck and Scorpio owners ask us if this is Mahindra product as it looks really good despite being on the small side than their car.

The TUV 300 has the same kind of presence Scorpio, which, despite its cheeky styling pretty much ends the story right here. If you want bling, the TUV 300 is for you as the front is very Jeep indeed and rear is flat, but it’s the side profile which resembles to a World War one tank. Small wheels in big wheel arches look a bit awkward, but the design of the wheel makes up for it. Ecosport on the other hand is for the person who wants more subtle yet presence filled SUV, which can be a car while driving and on the outside it should like an SUV. The modern looking front and futuristic look side profile and perfect SUV stance along with tail-gate mounted spare wheel give it the through compact SUV feel.

The design is just bang on when it comes to providing the SUV aesthetics. 16-inch wheel are the reason why our test car had a good command over its rival and other hatchback of the same size. 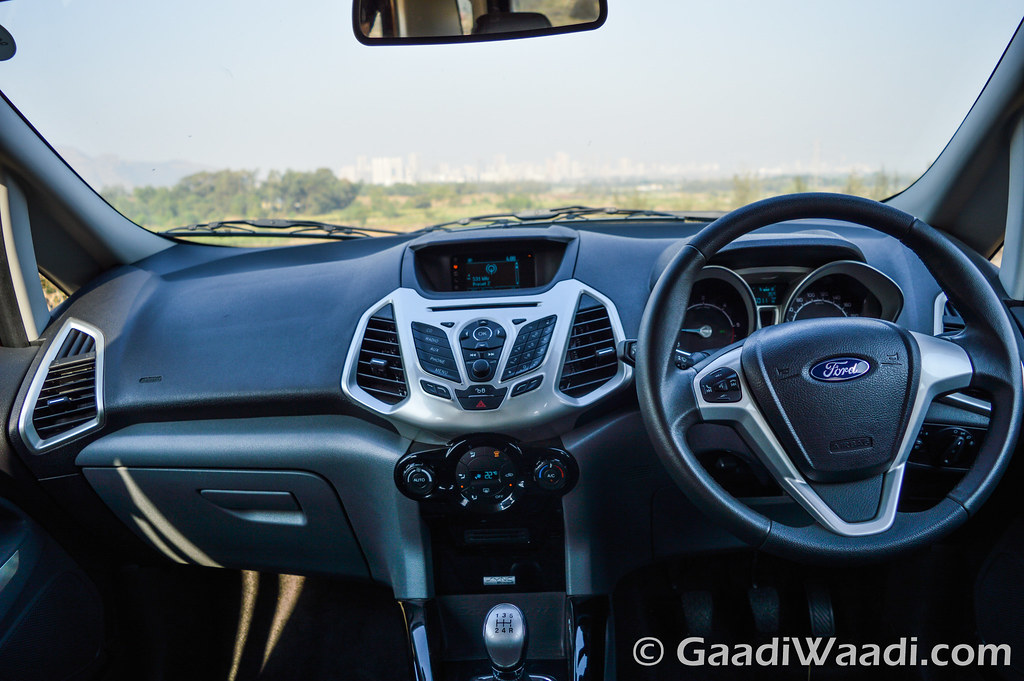 Both cars have raised riding position and dashboard is also mounted on the higher side as much as they could be and hence despite we get great visibility head on. TUV 300 gives good visibility all around, but the Ford suffers at the front-side as the swooping A-pillars which look great on the outside translate poor visibility at junction which is a serious issue at times. Both SUV’s have a lot of storage space inside the cabin, but the Mahindra cubby spaces are not deep and sloppy hence while braking you can toss around your things if kept loose. 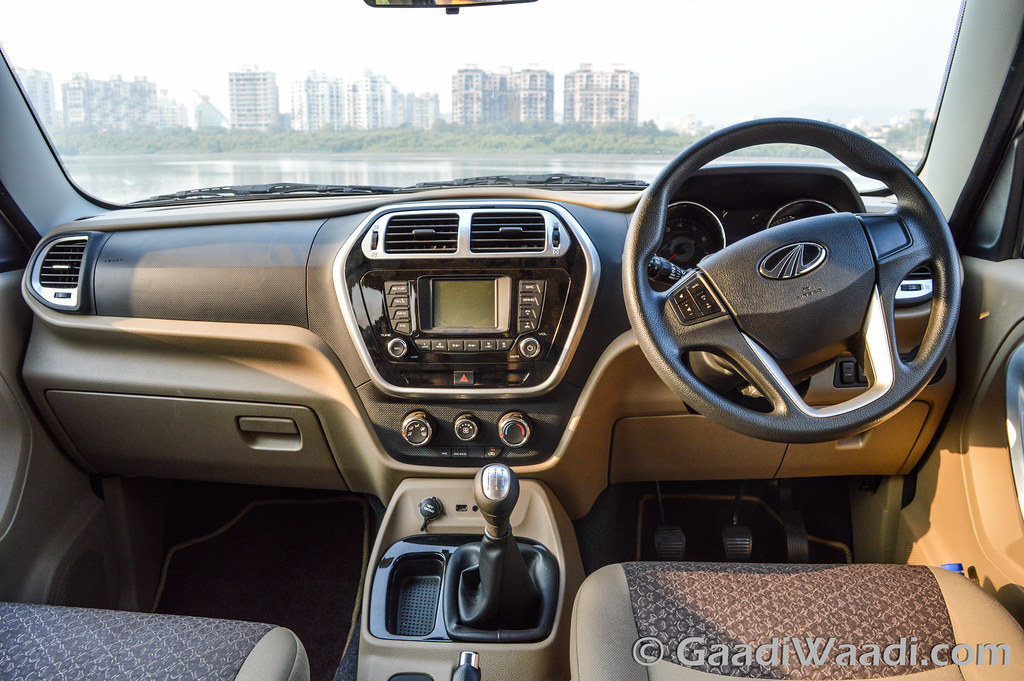 Interior quality and fit-finish is good with both cars and could be better. However, that is a huge compliment for Mahindra, it is by far the best interior Mahindra has every created even leaves behind the XUV 500 in plush feeling. Ford’s interior just doesn’t catch up on that aspect when compared to the TUV 300. The Ecosport has a lot of gadgets to compensate for the lack of plastic quality it offers in front of the TUV 300. 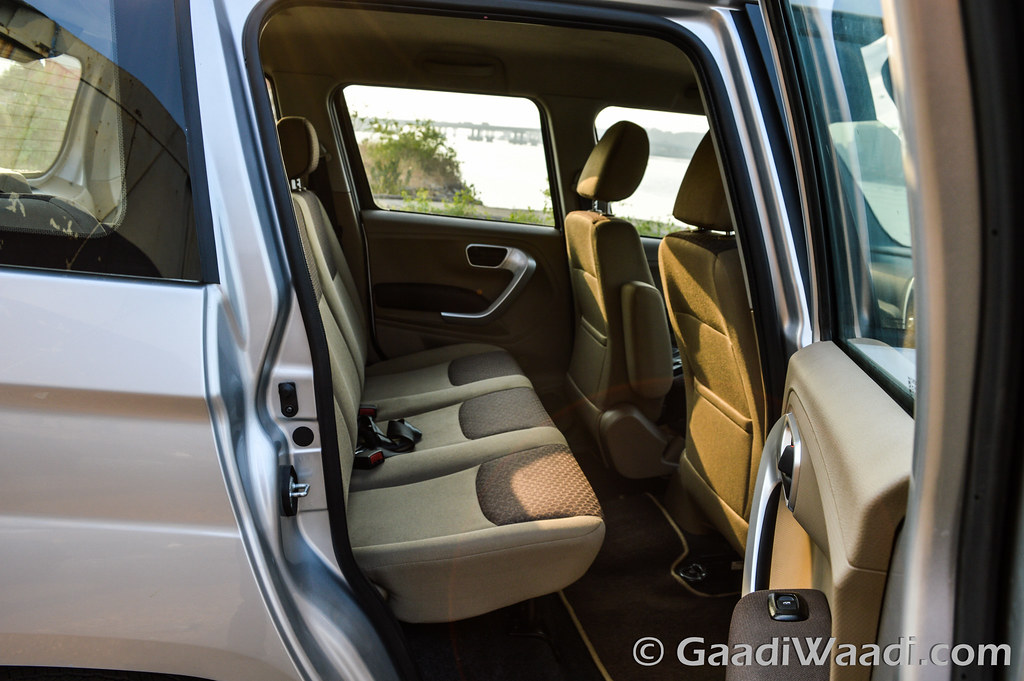 Both cars have a very good music system and speaker quality to offer, Ecosport could use more bass and better quality speakers though when compared. Both cars offer a good amount of legroom, headroom and lack should room at the rear and offer similar boot space. TUV 300 offers jump seats, but they aren’t of much use on long journeys and aren’t considered safe either. Seats on the Ecosport, at the front are more comfortable than the TUV 300 which are small and offer less support in all areas. 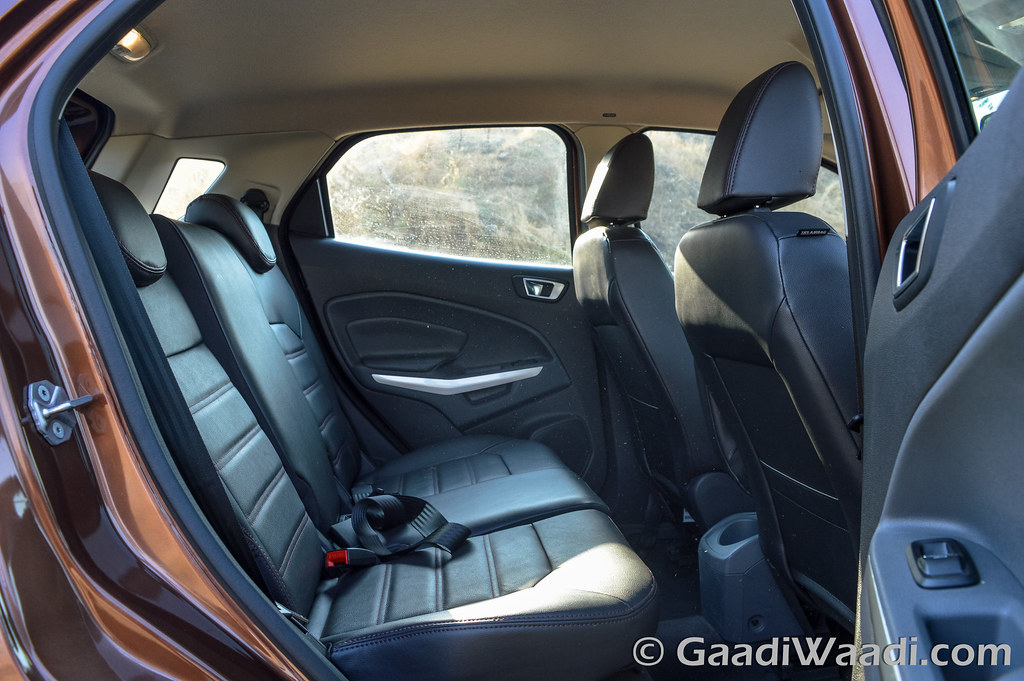 While TUV 300 just offers basic connectivity and a basic MID which just has a DTE, Ford has everything right from start-stop button, six airbags, voice activated controls, SYNC system which gives you a lot of room to play with, 3 flash turn indicator, auto dimming internal mirror and much more. TUV 300 offers dual airbags on all variants while Ecosport offers from second optional variant and six airbags on top variant. There are some similarities between these cars that are basic for this segment. Both have diesel engines in our test car and come with 1.5 litre engine displacement. However, the Ecosport is four-cylinder engine that now makes 100 PS of power and the TUV 300 makes 85 PS of power from the 3-cylinder. Despite this, TUV 300 makes 25 Nm of torque more than the Ecosport which makes just 205 Nm of torque.

Ecosport weighs around 1200 kgs meanwhile the TUV 300 weighs around 1500 kgs thanks to the ladder on frame chassis. Both SUV’s have very good levels of NVH and sound insulation at all speeds which makes driving comfortable for higher duration. 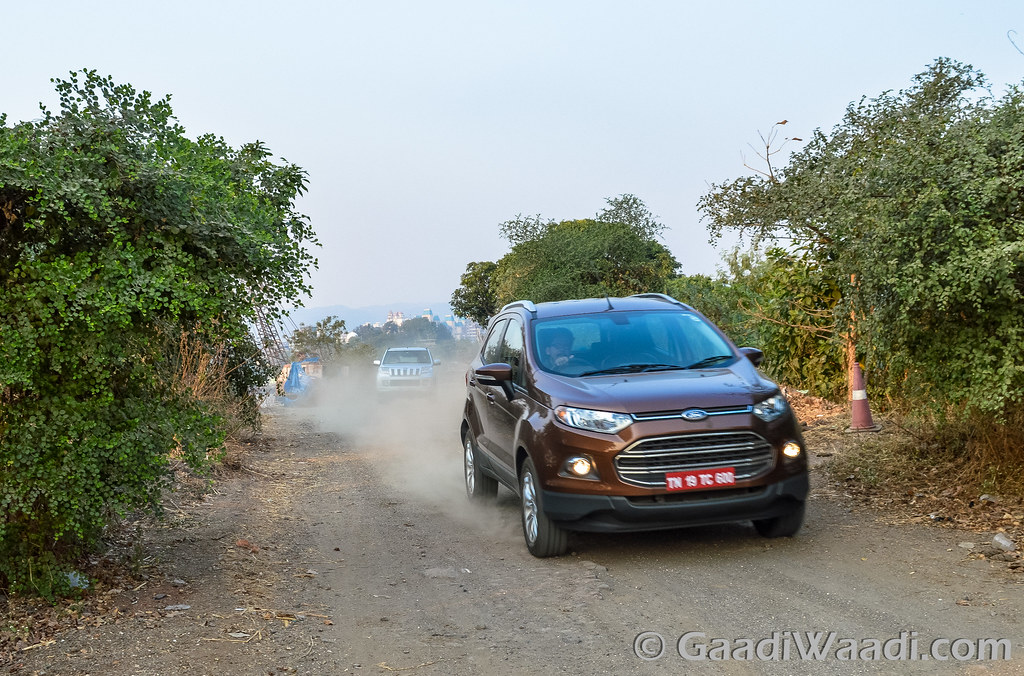 Sure, Ecosport has more performance as it has a higher top speed (160 km/hr) against the TUV 300 which does 130 or slightly more but with a lot more effort. Engine is more livelier and turbo spools a lot faster than the Ecosport too. It clearly feels like a detuned Scorpio and that too is done with perfection. 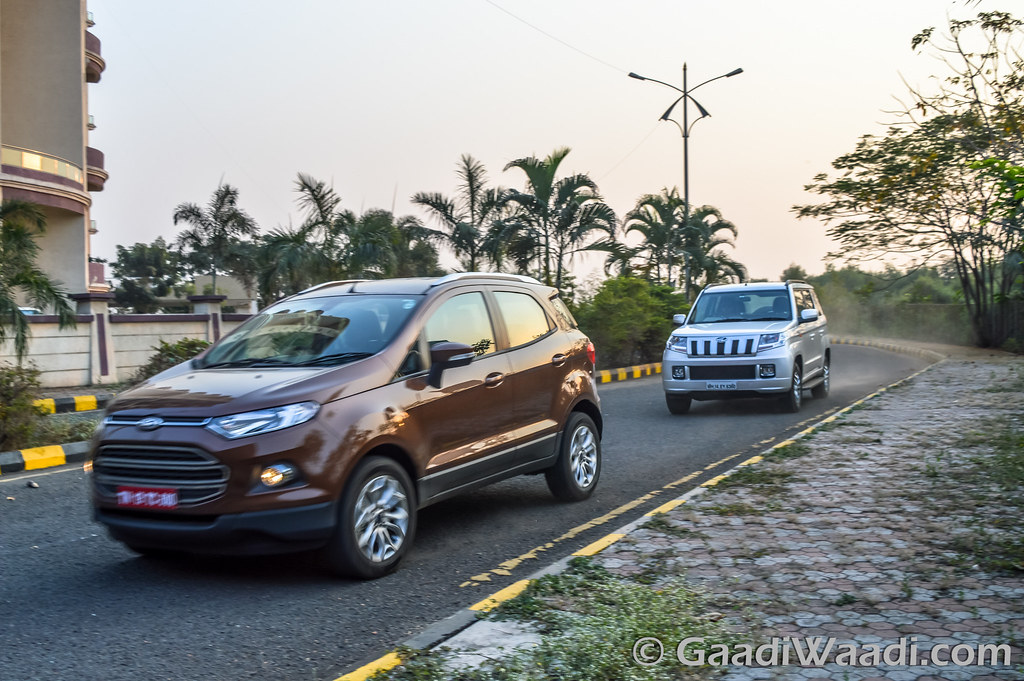 Ecosport has better numbers when it comes to performance. However, you cannot deny that Mahindra has done a stellar job with the engine and deserves one huge round of applause. Both have acceptable gearbox shift feel, the Ecosport has a shorter throw while the Mahindra has a long one and despite that the gates are well-defined. 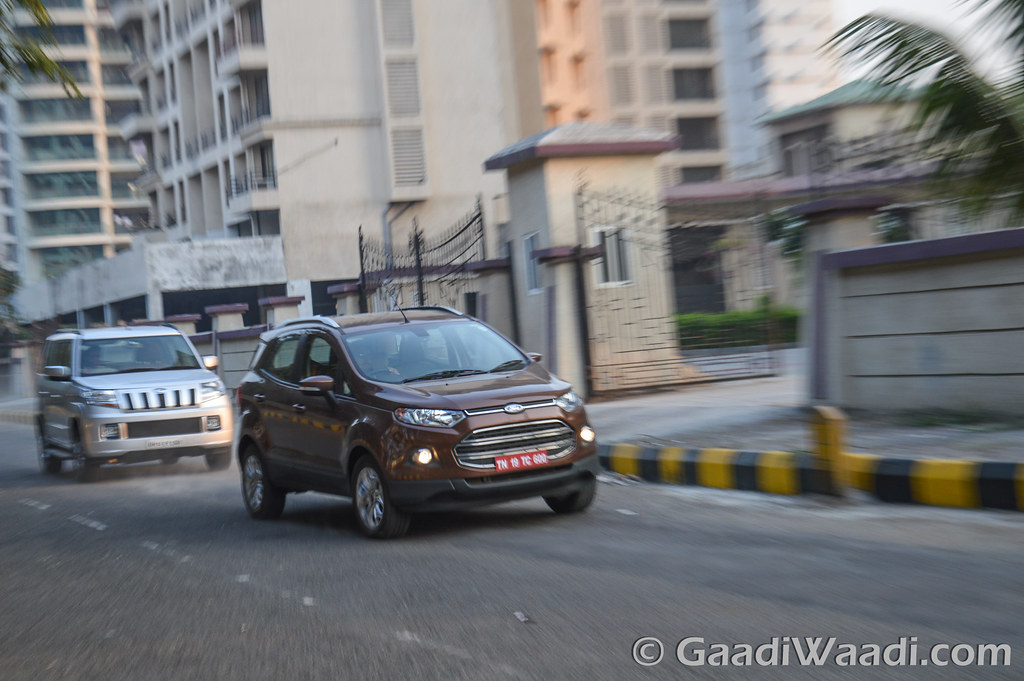 Clutch is light on both SUV’s, but have slightly longer play than usual. To sum up then, if you are the person who likes sedate driving you cannot go wrong with either of them. However, if you want performance you should go for the Ecosport. Both cars returned 16 km/l on an average with city and highway driving. We think Ecosport can deliver more if it runs on 15-inch wheels and if the engine is in better condition. 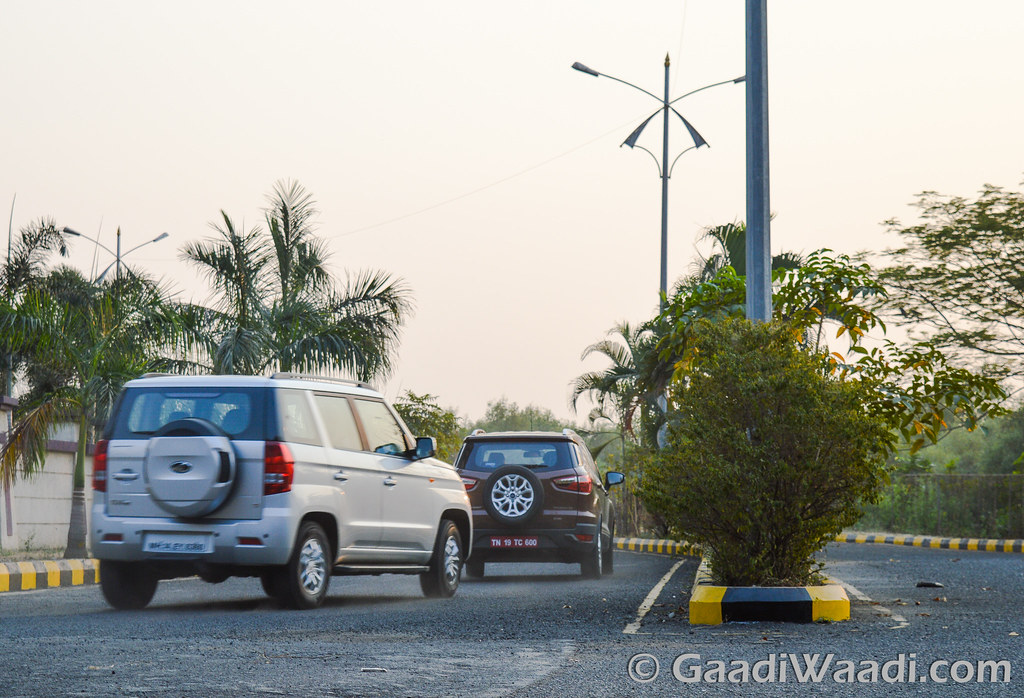 There is a Ford in the test so we know what’s next. The TUV 300 on the other hand doesn’t have much going on paper as well because its a ladder on frame. But, hang on a second. The TUV 300 is based on the new Scorpio so it isn’t as bad as you think it is. Body roll is well controlled, the grip level is good and turns quite quickly too, as the front does the steering and power goes to the real wheel. 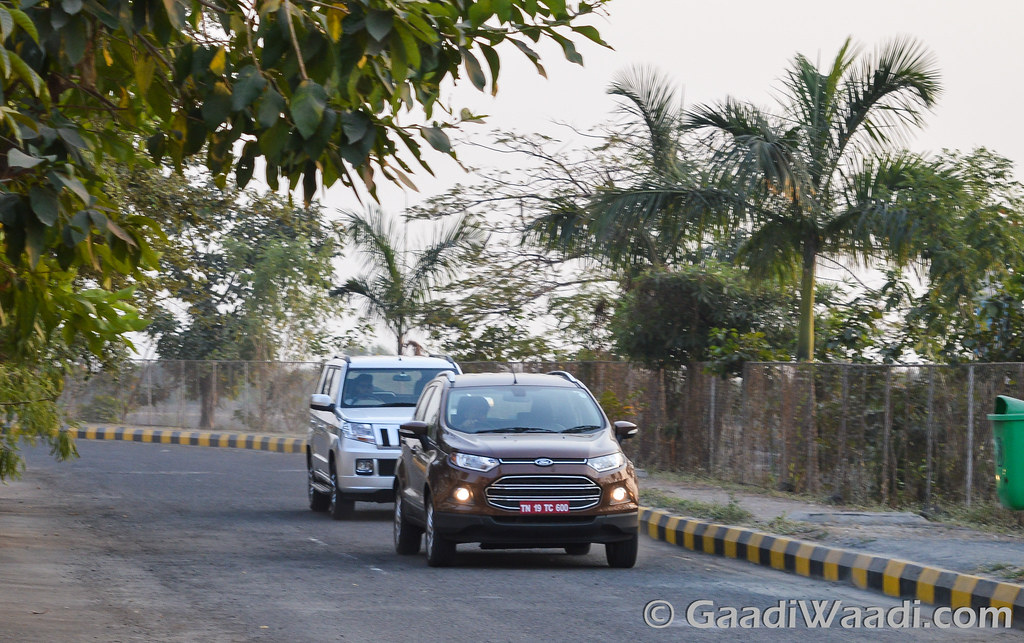 You have to be sedate though, as the SUV has the tendency to leave its track and weave around if you get naughty with it. This doesn’t happen with the Ecosport, you can take it to the limit and enjoy grip and on any surface thanks to very good tyres and bigger 16-inch wheels. Ecosport has body roll, but very well taken care off and only noticed when driven enthusiastically. 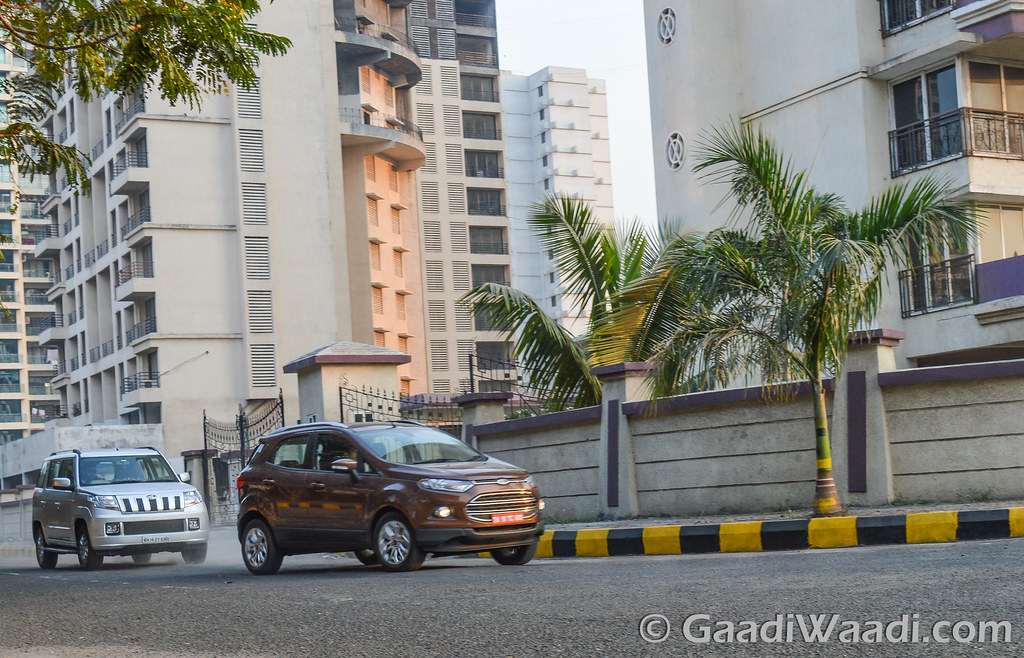 Reason why TUV 300 doesn’t have much of handling prowess is because we said at the test drive of this car this is quite under-tyred in the process of fuel efficiency. Both cars posses great ride quality and TUV 300 can take bad roads even better as it just takes off-road conditions and unpaved roads like a boss. All of this means practicality is high on both cars, but again, the Ecosport is the more performance oriented SUV in front of the TUV 300. 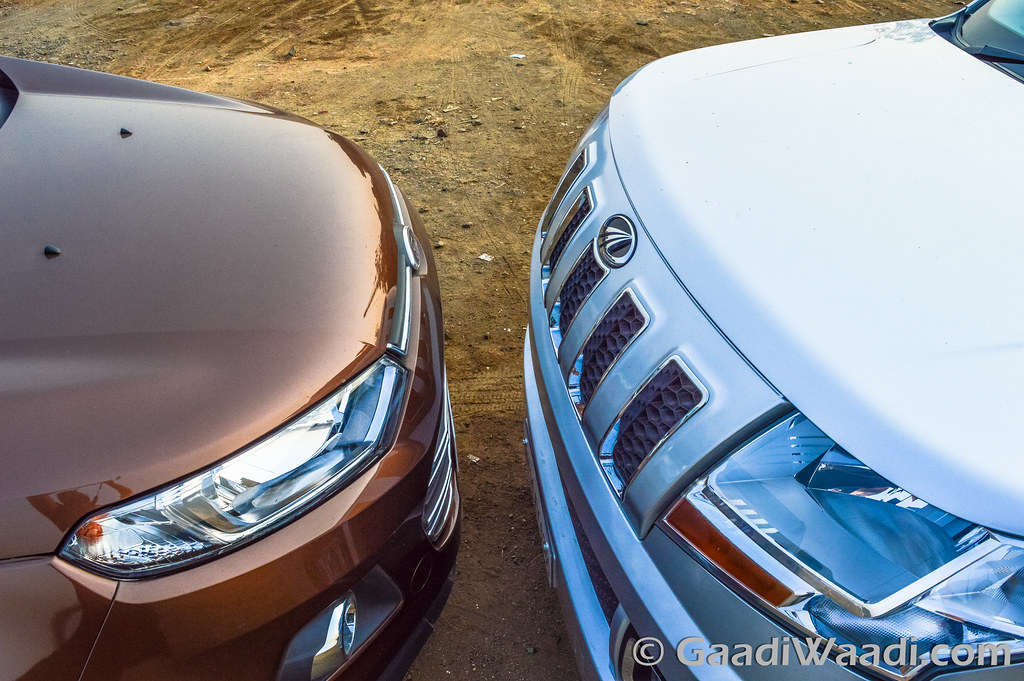 When it comes to pricing, the TUV300 offers value as it gives you basic features and a ladder on frame chassis along with a great motor and an SUV, which has a good amount of space and an overall package which is best suited to sedate drivers and want bling over performance and true blue SUV feel.

Ecosport top-end variants are pricey, but they do come fully loaded with airbags, features and segment leading power train options to choose from. Ecosport is practical too with its diesel engine and space on board. 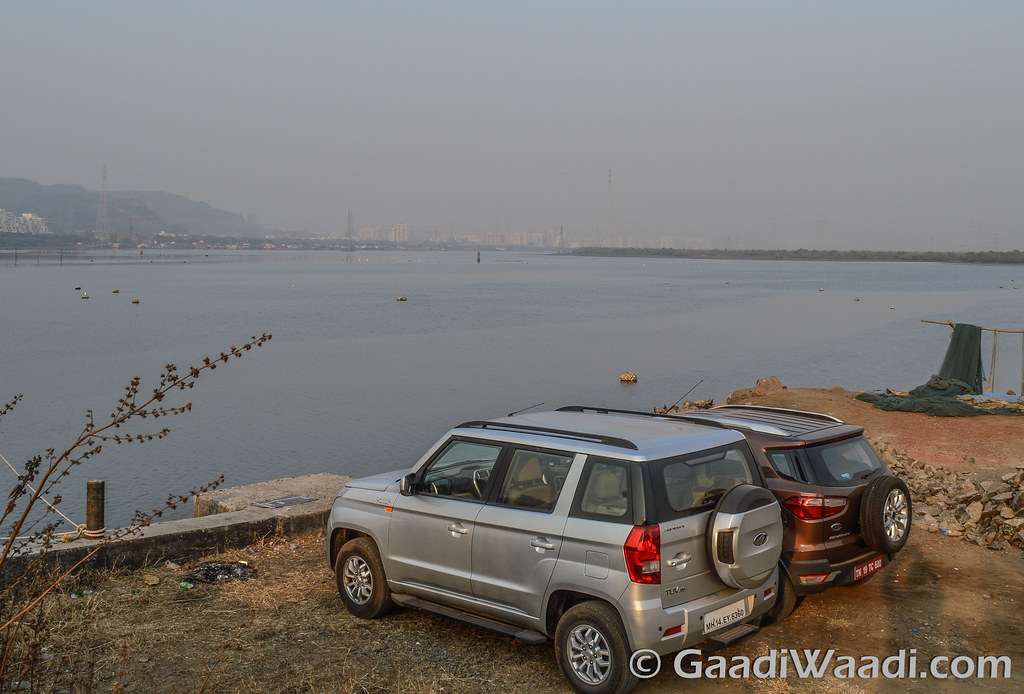 Mahindra has done a fantastic job with the TUV 300 and you cannot simply deny it this time. The SUV feels better in some aspects than its flagship model too. TUV300 ticks all the right boxes when it comes practicality, but so does the Ecosport as it offers more modern design and host of features which is market requirement and hence it wins this test. 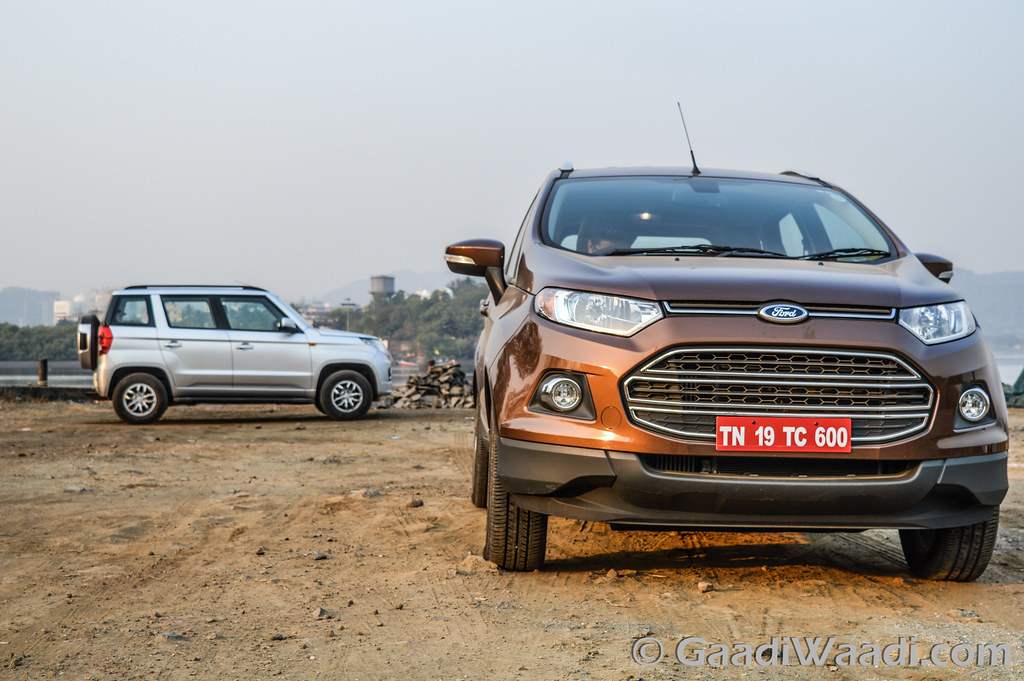 With the TUV300 though what you are truly getting is a budget/Mini Scorpio in a disguise and that already says a lot. TUV300 also comes with a segment first diesel automatic and is better in some aspects than the Ford Ecosport and that is great news! TUV 300 is a fantastic option, despite it is in a different league. If it only had an 4×4 option, it would be the ideal true blue, lifestyle compact SUV that we have been waiting for.

Both are ex-showroom Price Delhi