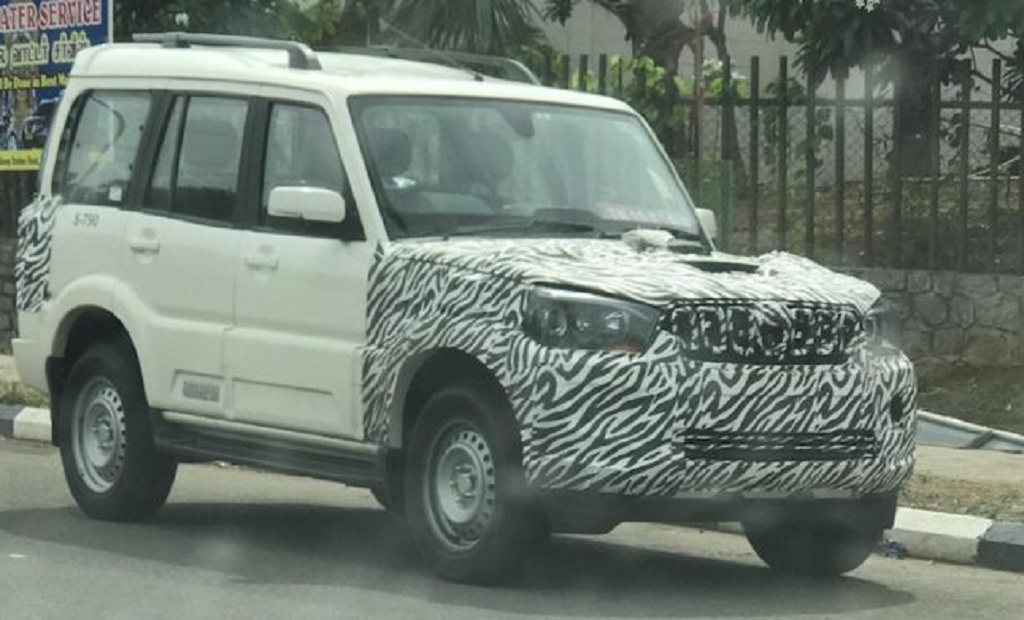 Courtesy of our dedicated reader, the new special edition version of the Scorpio has been snapped running trials in India. The SUV’s test mule wears a white outer covering but the bodywork can be easily visualised. It could sport distinctive new side graphics hiding underneath the white veil as the exterior styling has been left untouched.

To emphasise the Special Edition model, the country’s largest SUV manufacturer could fit the existing third generation Scorpio with aggressive black alloy wheels with a fresh design. The red brake calipers will accentuate the entire appearance of the already imposing volume-seller from Mahindra and Mahindra. It is expected to grace showrooms very soon with a slight premium price tag over the stock model.

The Mahindra Scorpio is currently being offered in five variants and ten trims ranging from the base S2 to S10 4WD AT top-end version. Being a constant money churner for more than a decade, the SUV received a prominent upgrade within four years of its life span before an all new generation was released in the latter half of 2014 after a vastly stretched out tenure.

The third generation Scorpio SUV is propelled by two choices of diesel engines, a 2.2-litre and 2.6-litre units. The high displacing 2,523 cc diesel motor is available only in the base S2 variant priced at Rs. 9.06 lakh (ex-showroom, Delhi) and has a rated fuel efficiency of 15.4 kmpl. The range-topping diesel 4WD AT is retailed for Rs. 14.61 lakh (ex-showroom, Delhi).

Whilst the popular 2,179 cc diesel engine has higher power and torque figures, it was certified by ARAI to return the same mileage as the 2,523 cc engine-equipped base model. The overall proportions of the Scorpio are: 4,456 length, 1,820 width, 1,930 height, 2,680 wheelbase with a ground clearance of 180 mm.

The 2,523 cc inline four-cylinder m2DICR turbo diesel pushes out a maximum power output of 75 bhp at 3,200 rpm and 200 Nm of peak torque at 1,400 rpm. Driving the rear wheels is through a five-speed manual gearbox. The 2,179 cc inline four-cylinder mHawk CRDe produces a total power of 120 bhp at 4,000 rpm and 280 Nm torque at 1,800 rpm.
This engine drives the front wheels or all four-wheels via either a five-speed manual or a six-speed automatic transmission.