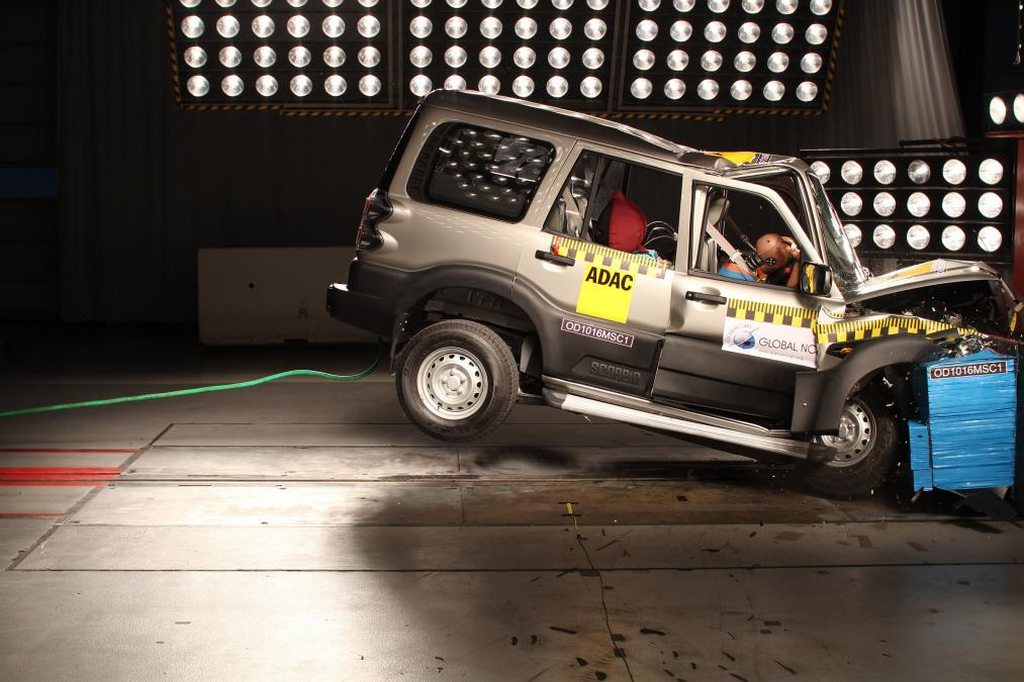 The latest round of Global NCAP crash tests for Indian cars yielded them nothing as zero stars were awarded for Maruti Suzuki Celerio, Maruti Suzuki Eeco, Hyundai Eon, Mahindra Scorpio and three versions of Renault Kwid. As the French automaker, Renault, vowed to reinforce the body structure of the Kwid hatchback, Mahindra has perhaps become the biggest casualty as one of the best-selling models from the largest SUV manufacturer in the country received no marks.

The Mahindra Scorpio SUV is known for its rigidity and boldness in the domestic market but Global NCAP assessed it as equal to the small hatchbacks that collapsed in the event of crash after putting it through a series of stringent tests.

It achieved nil rating in the adult occupant protection and only two stars in the child protection. The resultant impact was that the entire body shell collapsed augmented by the lack of airbags. It’s been said the probability of life changing injuries for at least one of the adult occupants is “high”. Here’s the video of the Scorpio crashing at 64 kmph into a concrete structure:

For adult occupants, the protection offered to the head and chest of the driver was poor and the passenger’s chest was protected marginally. With the bodyshell rated as ”unstable” and can’t withstand further loadings, the passengers’ knees will be damaged by the “dangerous” structures in the dashboard.

The impact and biomechanical readings were beyond limits for the child seat with a 3 year old. While unable to prevent excessive forward movement, the dynamic performance of the 18 months child restraint was adequate. Additionally, both child seats’ installation instructions were insufficient and not permanently attached to the seat.

“The latest SaferCarsforIndia results show how important it is for cars to have a body shell that can remain stable in a crash. This is an absolutely crucial pre-requisite for occupant safety together with fitment at least of front air bags”

“The results highlight the importance of the Indian Government’s decision to mandate front and side impact crash tests from October 2017” to meet the minimum requirements framed by United Nations.

“Global NCAP also welcomes the forthcoming launch of a Bharat New Car Assessment Programme which can help build a market for safer cars in India.”

In response to the GNCAP results, Mahindra released a statement and said the brand’s products are developed and manufactured to stick with or exceed safety regulations established in India. Some of the models have exceeded the regulations devised for 2019 as well, said M&M.

Mahindra’s argument was that the latest crash test was performed on non-airbag version of the Scorpio SUV. It claimed that in crash tests the non-airbag models won’t receive good ratings normally.

About three-fourth of the Scorpio customers choose airbag-equipped variants with other safety packages, said the Mumbai-based company. The statement emphasised to say “There is nothing more important to us than our customer’s safety.” Global NCAP came up with two conclusions, one is the less rigid structure of the cars tested and second is the lack of airbags in the base variants.

The global safety organisation urged the Indian car makers to not wait until October 2017 when new regulations come into effect and react quickly to reinforce the impact structures and make safety equipment like Airbags standards from the entry-level models. Safety is common for all the buyers, why not the technologies?