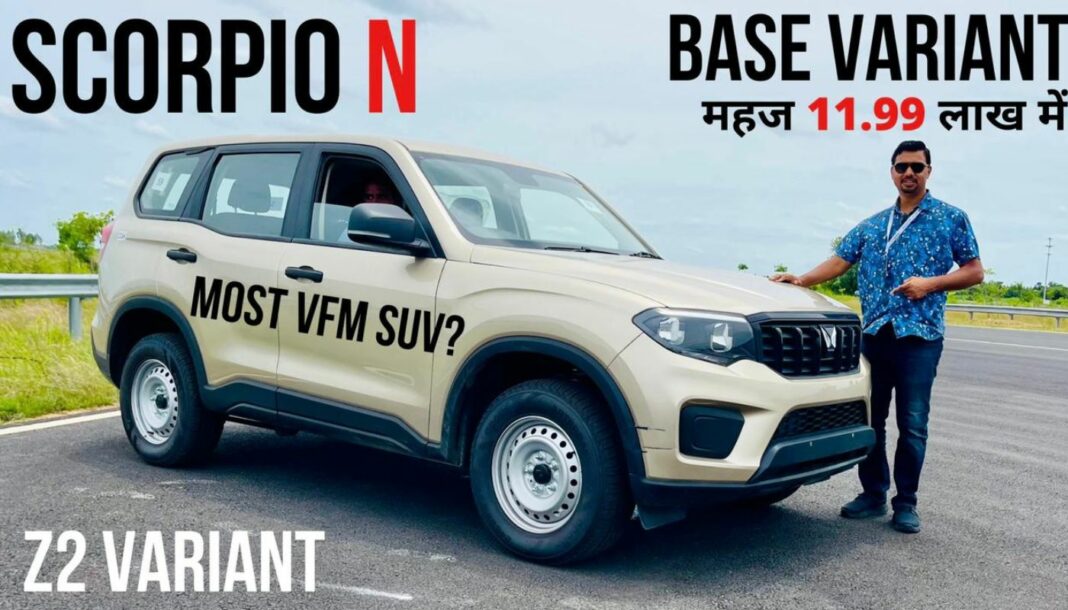 Mahindra & Mahindra introduced the Scorpio N with high anticipation in the domestic market. Priced between Rs. 11.99 lakh for the entry-level trim and Rs. 23.90 lakh for the range-topping model, the Scorpio N is offered in an expansive range appealing to a wide variety of customers. It is based on a new ladder frame construction and is lighter than the Scorpio Classic.

The Mahindra Scorpio N also has larger proportions than the Classic and is significantly more premium as well. The SUV is sold in six- and seven-seater configurations across five variants namely Z2, Z4, Z6, Z8, and Z8L. The Scorpio N has already received well over 1.5 lakh bookings in India and is available with a 2.0-litre mStallion petrol and a 2.2-litre mHawk diesel engine.

In the video linked below, we have explained in detail about the base Z2 variant. We have also talked about whether it is a VFM offering or not. The Mahindra Scorpio N Z2 is priced at Rs. 11.99 lakh for the petrol manual variant while the diesel manual model costs Rs. 12.49 lakh (both prices, ex-showroom). It must be noted that this grade is retailed only with a six-speed manual transmission.

The 2.0-litre turbocharged petrol engine produces 203 hp and 370 Nm when paired with a six-speed manual transmission and the same unit makes 10 Nm more torque when linked to a six-speed torque converter automatic unit in other variants. Mahindra only offers a two-wheel drive configuration with the petrol engine.

The base Z2 variant comes with a 2.2-litre mHawk diesel engine in its lower state of tune. It develops 130 hp and 300 Nm when connected to a six-speed manual transmission. The higher spec variants are equipped with the same engine delivering more power and torque as up to 175 hp and 400 Nm are produced.