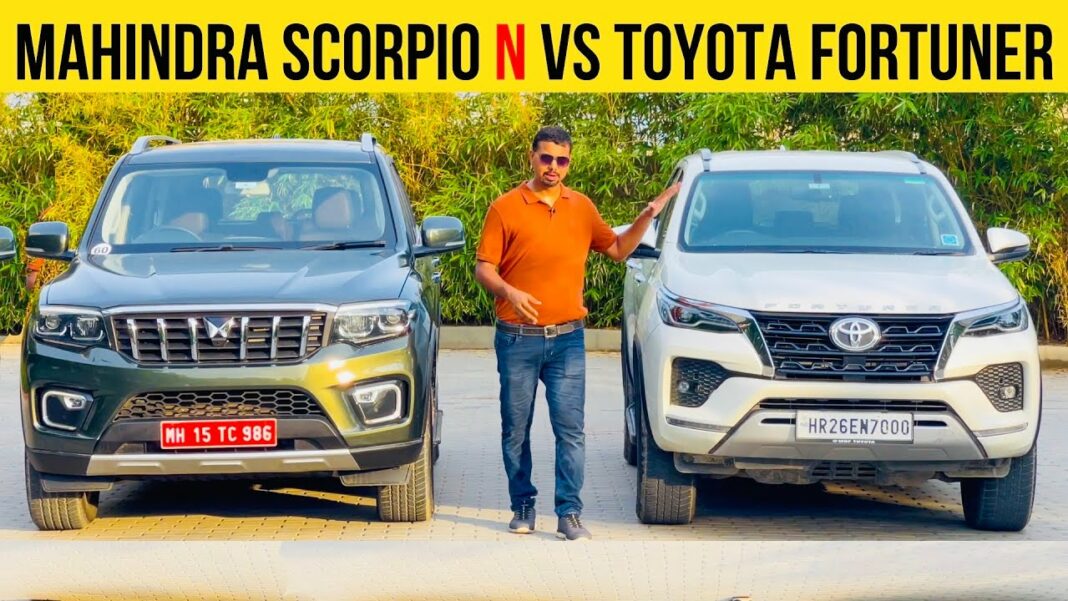 It is no secret that the recently launched Mahindra Scorpio N has been the talk of the town and it has been well received by customers. Compared to the old model, which is also on sale under the updated avatar dubbed Scorpio Classic, the Scorpio N is more premium inside and out. It is also offered in an expansive range as it’s priced between Rs. 11.99 lakh and Rs. 23.90 lakh (ex-showroom).

The Toyota Fortuner is currently the full-size SUV segment leader and is priced between Rs. 32.39 lakh and Rs. 49.57 lakh (ex-showroom). While the Mahindra Scorpio N and Toyota Fortuner are not direct rivals by any means, there are some similarities like both are capable of doing off-roading as they come with 4WD configuration and they are seven-seater SUVs.

Both are based on a ladder frame chassis as well. In the video linked below, we have compared the Mahindra Scorpio N against the Toyota Fortuner to tell you the readers which one suits you better. The Fortuner is underpinned by the iMV architecture as the Innova Crysta MPV and Hilux pickup truck and it derives power from a 2.7-litre petrol and a 2.8-litre diesel engine.

The former develops a maximum power output of 164 bhp and 245 Nm of peak torque while the latter kicks out 201 bhp and 420 Nm of torque (500 Nm when linked with an AT). The transmission choices include a six-speed manual and a six-speed torque converter automatic unit.

The Mahindra Scorpio N sits on a new body-on-frame chassis, which will also be found in the upcoming five-door Thar. It is equipped with a 2.2-litre mHawk diesel and a 2.0-litre mStallion petrol mill. The former is good enough to generate a maximum power output of around 200 bhp and 370 Nm of torque when paired with a six-speed manual transmission and 380 Nm when mated to a six-speed torque converter automatic unit.