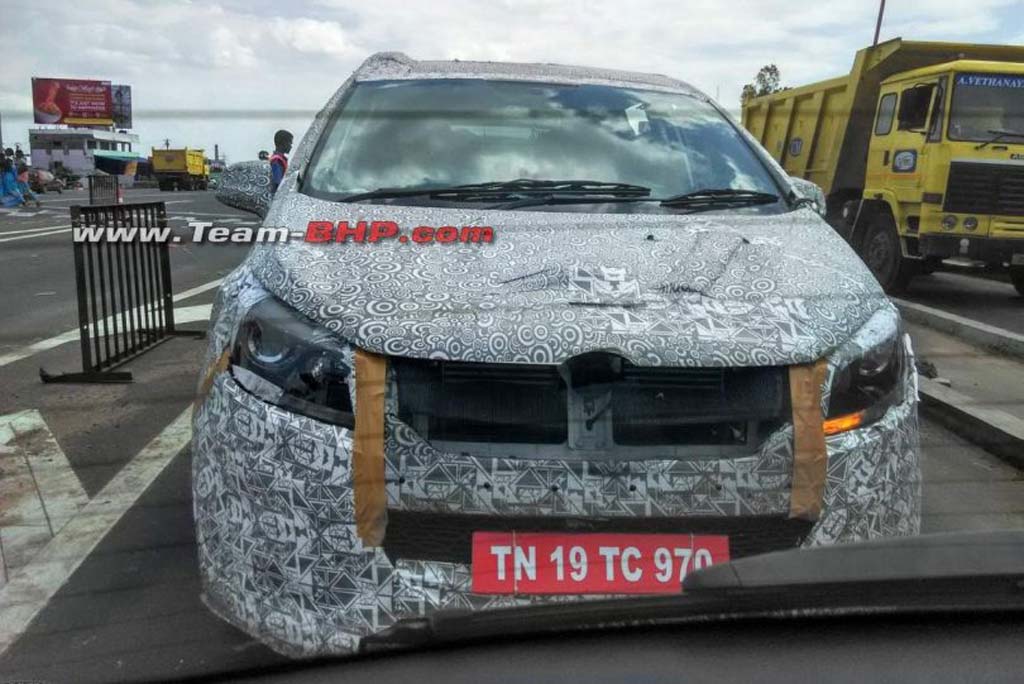 A MPV being developed by Mahindra & Mahindra has been making news for quite some time. The upcoming Mahindra MPV, which is supposed to be named as TUV500 has been spied testing in Chennai again; this time revealing its front fascia closely. The SUV maker of India is mainly targeting the Toyota Innova Crysta with its upcoming MPV, which will be positioned above the XUV500 SUV.

The Mahindra MPV is codenamed as U321, and it has been designed and developed by the auto manufacturer’s R&D centre in Troy, US. The company is might be known for its range of SUVs in Indian market, but now the Mumbai based auto major is keen to set its foot in other segments also. Given the fact the MPV segment in Indian automobile market has enough potential to grow, Mahindra is developing the TUV500. The test mule spied in Chennai, reveals the car will sport projector headlamps, while in early spyshots we got an idea about the front grille also. Expect the front fascia to come very aggressive looking with teeth like chrome finished grille, beefy bumper, integrated LED daytime running lights. The Mahindra MPV is based on a whole new platform, and the company is planning to go global with this model instead of focusing on Indian market only.

The car looks quite big and therefore, Mahindra’s ambition to take on the Toyota Innova Crysta becomes clear. In an attempt to come on par with Innova premium looking Crysta, Mahindra would equip the car with upmarket features. In terms of space and comfort it would be impressive, as the size of the car suggests. Power source for the Mahindra TUV500 could be a 2.2 litre diesel engine producing 140 bhp of peak power and 330 Nm of peak torque, while there could be a 1.99 litre mHawk diesel unit as well. Reports suggest a petrol variant will be also available for this car. While a six speed manual transmission will be standard, there will be an automatic one as well.