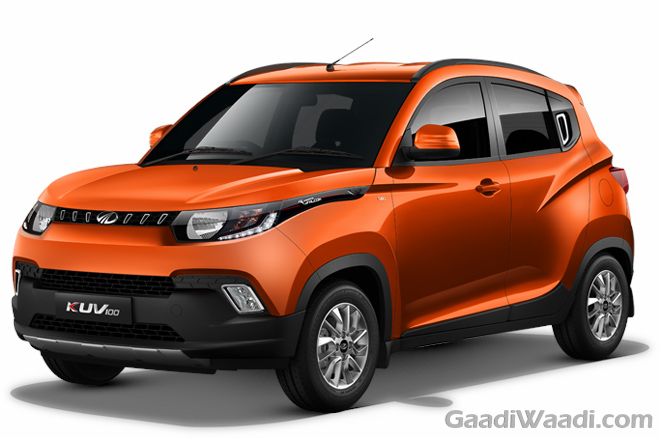 The first month of the new year has always been busy with car manufacturers launching their new products to have a head-start in the segment they intend to endeavour in. Mahindra has been one such auto maker who vies to take on the affordable market space by a surprise with the introduction of KUV100 sub-4m compact SUV today. After months of speculations, spy pictures and teasers here we have come up with the eight essential information you need to know about the Mahindra KUV100:

The UV as we know abbreviates to Utility Vehicle but “K” stands for Kool as Mahindra tries to attract first-time young buyers’ crowd with the KUV100 micro SUV and the plethora of features it will be provided with. At a glance you could figure out KUV100 is a completely different design package to TUV300 or XUV500. The well-crafted headlights with DRLs extends to the sides flanking sleeker vertical grille whilst black body cladding at the bottom, rectangular foglamps and broader shoulder line that stretches to the tail gate add sturdy appeal to the Sub-4m SUV. With the clever seating arrangement, the front row can accommodate three individuals. One is a driver and the other two on the co-passenger side with seat belts for each and the front middle seat head rest can be converted into an armrest. For the easy of driving on long travel and to tackle the jammed-up city traffic, Mahindra has offered the KUV100 with a short five-clog gear lever mounted on the centre console – first of its kind in the compact SUV segment that not often can be witnessed on affordable Indian vehicles.

5. Powered by New Family of Engines:

The largest SUV manufacturer in the country will introduce the KUV100 with a new breed of smaller capacity engines. It’s in contrary to the above 2.0-litre gas guzzlers Mahindra SUVs comes packed with in reaction to the growing opposition of higher displacing diesel units. The all-new three-cylinder 1.2-litre G80 Petrol mFalcon VVT engine develops 82bhp of power at 5,500 rpm and 114Nm of peak torque at 3,500rpm. Th 1.2-litre three-cylinder D75 Diesel mFalcon CRDI mill is capable of pushing out 77bhp maximum power at 3,750 rpm and 190 Nm of torque at 1,750 rpm. Both engines send power to the front wheels through a five-speed manual transmission and no plans of automatic gearbox is being put in place yet. The sub four-metre SUV is more likely to be priced aggressively in the region between Rs. 4 lakh for the base variant and Rs. 6.5 lakh for the top-of-the-range model. Moreover, dual airbags, ABS(Anti-Lock Braking System) with EBD(Electronic Brake Distribution) and engine immobilizer are offered as standard across all variants.

With KUV100’s competitive pricing, the sales of recently launched Maruti Suzuki Baleno and its rivals Hyundai Elite i20, Honda Jazz and VW Polo could be affected by the compact utility vehicle. The entry-level vehicles that fall under the base price of KUV100 such as Maruti Suzuki WagonR, Renault Kwid top-end and Chevrolet Beat as well as top-end diesel variant rivalling Figo, Nissan Micra Active, Hyundai i10 and even Swift hatchback are the customer base in which Mahindra will be hoping to approach with the KUV100. More significantly the upcoming Tata Nexon and Maruti Suzuki Ignis sub-4m SUV could give the micro SUV a vigorous challenge.