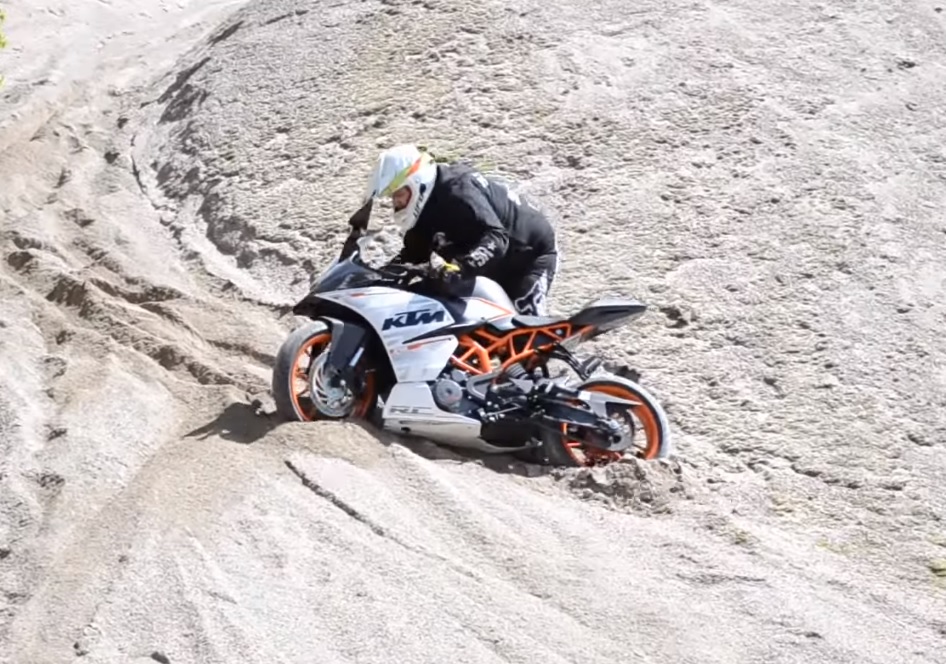 Youngster Screw his KTM RC 390 in the most unbelievable ways one can think, off roading, hanging it upside

Ladies and Gentlemen, witness insanity today. People of some western civilization are seen loosing their minds to the very limit which seems impossible at times all thanks to MANY things. However, this time why it concerns is the way the person in the video has gone ballistic with a KTM RC 390. The bike is not known shown going at track as fast as the Yamaha R1 or anything.

KTM RC 390 is being used for off-roading, go over hills, which are made of sand, climbing inclines, jump up of elevated ridges and much much more. All of this is being done with tyres that are made to stick to the road. Nevertheless though! They are burn’t in the end to a limit where sparks come out as the steel radials get exposed to the ground quickly.

Then those threads are stuck in the rear sprockets. To solve this, the bike then again is tortured by being hung upside down as if is being given third degree torturer. The fuel seen leaking out from the gas cap. It is in then into the well of death where it shows of its stability and the skills of the rider. Obviously after extremeness the bike must have seen within just few days it seems it gave up and the riders are seen towing the bike in a pick up truck WHILE riding a KTM SuperDuke 1290.

All of this has happened thanks to KTM itself. According to the video makers, KTM has provided them this bike to try and KILL it. Well they did get very near to that’s for sure. They wanted to blow it up but quote from them says “according to the “RC Challenge” rules we weren’t allowed” Ya right!

Obviously there has to be a name to the people who do these things and they called themselves Superretards, a verified channel by Youtube. All of these things are seen on their channel and they are a organization, which specializes in doing these things on purpose.

There will be mixed reaction towards this as some people will love it, some people will hate it. However, the owner of the same bikes will have some pretty interesting things to say. All in all Hooliganism is being redefined here thanks to “Superretards” and their choice of weapon