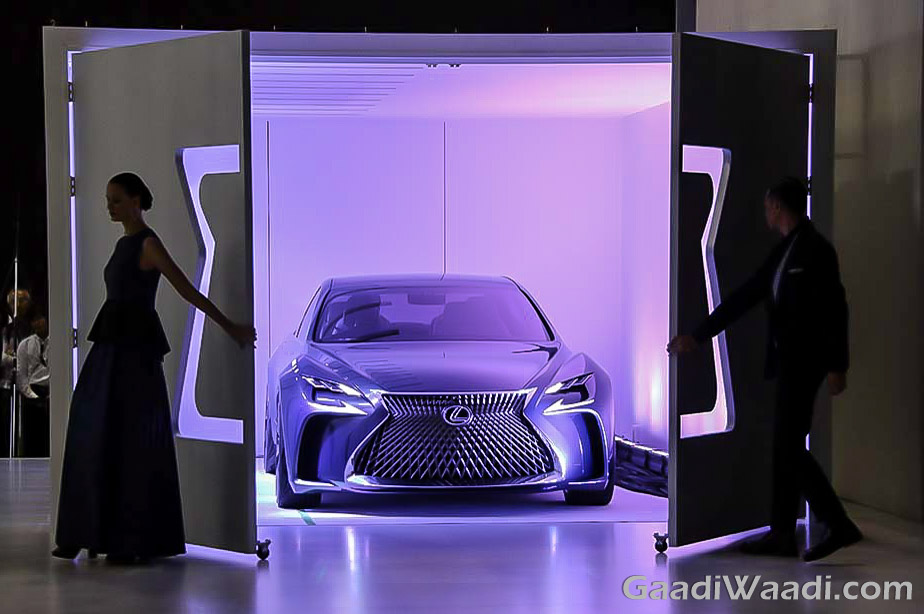 Lexus dropped a bombshell at the 2015 Tokyo Motor Show with the unveiling of the luxury LF-FC concept that comes with bold new styling and a revolutionary hydrogen electric fuel-cell powertrain driving all four wheels. It was the first manufacturer to introduce hybrid technology to the executive car class. Following the footsteps of parental company Toyota, the LF-FC’s hybrid powertrain moves a step further into effective use and realisation of hydrogen fuel cell technology.

The luxury arm of Toyota describes the concept as “design and technology direction for a future flagship saloon.” and stressed that, “The reason we are showing this car is because we are getting ready for a hydrogen-powered society.” Let’s get on with the rather intriguing hydrogen fuel-cell electric powertrain and see how it works, at least theoretically as for now.The hydrogen-powered fuel cell stack is mounted in the rear with power control unit at the front. The H2 storage tank is designed in a ‘T’ configuration and placed underneath keeping in mind the advantages of optimal weight distribution.

With one motor driving the rear wheels, power is sent to the back most of the time. Electrical energy is catered to a pair of in-wheel motors at the front axle with the electricity generated by the aforementioned H2 stack assembled at the rear.

Thus the drive system produces torque distribution to all four wheels and makes for ‘exceptional dynamic handling and superior road stability’ according to Lexus. The handling is also aided by active torque vectoring which switches torque instantly between the front and rear axles, although one would wonder a car of this size will be any way sporty. There are two driving modes to the powertrain: ‘cruising’ and ’acceleration’. With hydrogen as the source, the fuel cell stack creates electricity to drive the motor and recharge the battery when you cruise along. However in the ‘acceleration’ mode, both battery and fuel cell stack power the four-door saloon’s main onboard electric motor and its in-wheel electric motors thus generating maximum power under acceleration.

The concept’s bold styling is accentuated at the front by Lexus’s striking spindle grille, a long bonnet and swooping roofline as opposed to its rather boxy-looking rivals from Audi, BMW and Mercedes. Adopting some of the styling cues first seen on LF-LC coupe concept, the rear light clusters echo those used on Toyota’s hydrogen-powered car – the Mirai – with three-pronged tail lights at the extremely trimmed rear deck. The spacious and sumptuous interior features a gesture-controlled infotainment system, latest generation of autonomous driving systems and holographic projections that are used to direct gestures for controlling audio and ventilation functions. The LF-FC concept is almost Lagonda-like with 5300mm long, 2000mm wide and 1410mm high – making it notably larger than the current LS model. This could stand toe-to-toe with Mercedes S-class and even smaller Rolls-Royces in terms of proportions.

Competing in the same ultra-luxury saloon market as the Audi A8, Mercedes-Benz S-Class and BMW 7-Series, the LS-FC was expected to be powered by a V8 hybrid powertrain making 535bhp when Lexus teased it earlier this month. However, alongside the hydrogen-powered powertrain that sits on 21-inch, carbon fibre-reinforced plastic alloy wheels, conventional engines cannot be neglected either.