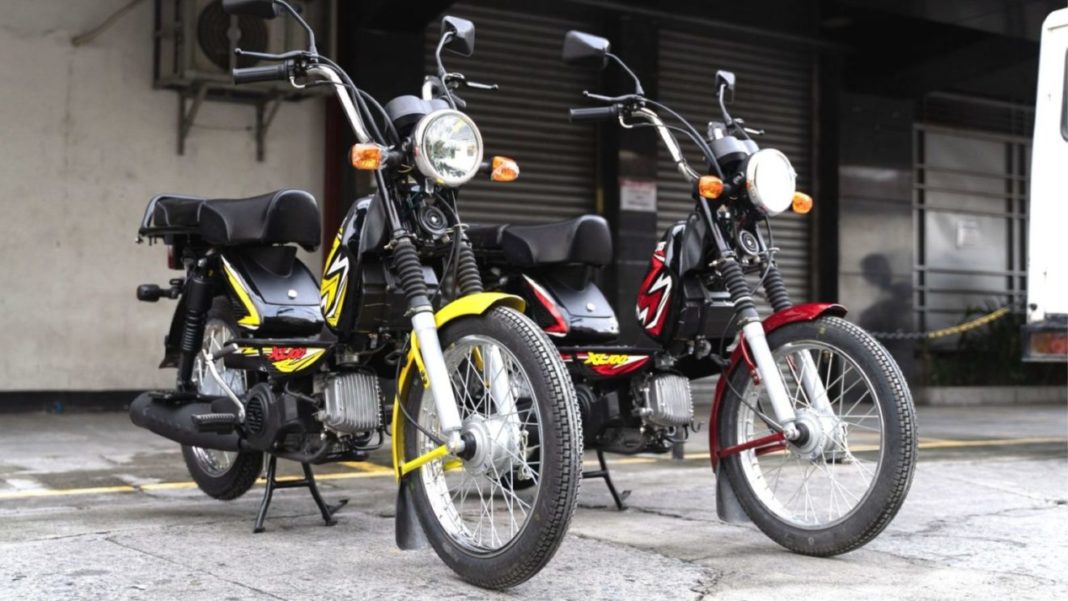 You get to redefine yourself on long rides and that’s the sole reason why people would take it up on regular intervals. Also, the two-wheeler you are saddled on to get from one point to another during the ride can change your perception on it over time. Personally, I’ve been using the XL brand for more than 15 years as any typical agricultural family in India would own it for utility purposes.

The one-of-its-kind moped gave me a different impression over the latest and perhaps the greatest version it has on offer in our two-day ride across the Philippines covering about 400 kilometres and this journey is about what I discovered along the way. Every country has different contemplation over a particular vehicle prompting manufacturers to come up with tailor-made, specific products suiting the requirements of the local customers as cars or bikes reflect their unique livelihood.

The XL100 introduced just a year ago in the Philippines has been enduring a new biking culture altogether. Filipinos adore their moto-scooters in a similar fashion to other Southeast Asian countries and you could really see their influence on roads. The custom exhausts, funky body graphics and slim tyres captivate the attention everywhere. TVS has the Dazz as it’s the top-selling model there while the XL100 is not far behind. 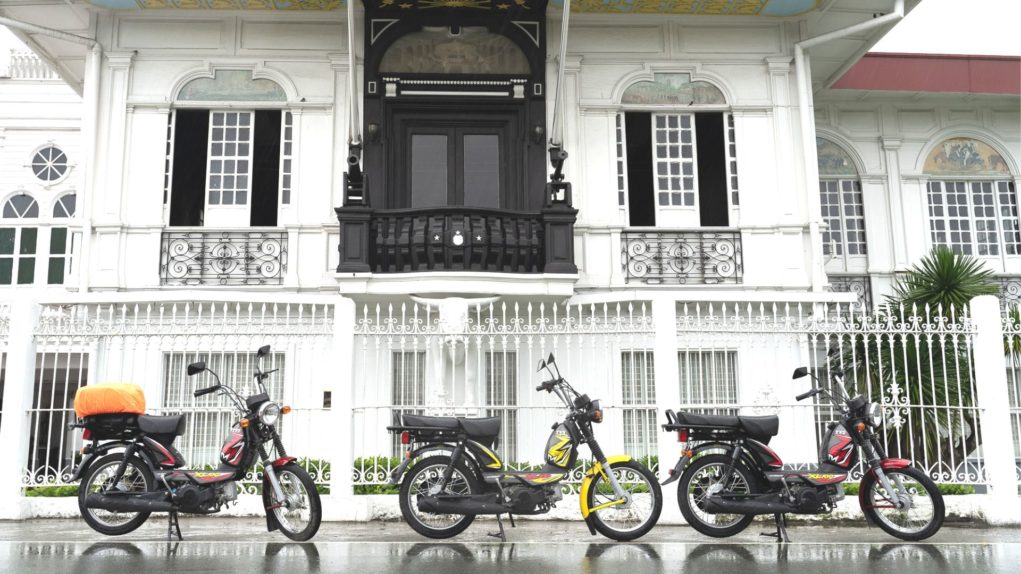 Due to the shift in biking culture and the perception I talked about, the XL100 is treated as a lifestyle moped with practicality and the ability to go the distance. After long-hour flights, I got to the city of Manila with big expectations and after strolling around throughout the night and getting to know how the local people are, my curiosity peaked after glancing through the itinerary for two days and I knew I wanted to make the most out of it.

An early start to the morning meant we got to the place where we had the flag off and began our ride on the XL100 when there was less traffic around. With an experienced Filipino journalist at the helm leading the pack making our ride a lot easier to navigate, we rode through different cities, broken tarmacs and uneven surfaces with little to no traction as it gave me a new lasting experience on a moped that I already know for more than half of my lifetime. 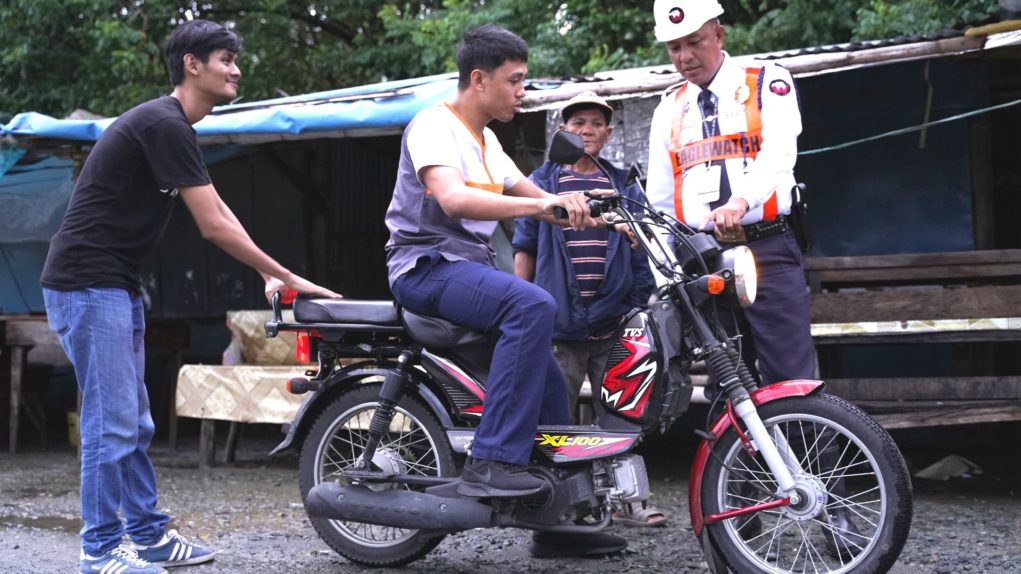 We began from Wheeltek Buendia showroom and had our first stop at the house of the country’s first president – the Aguinaldo Shrine in Kawit Cavite – with a passionate historic briefing that even got the crew excited. Since the rain gods showed no mercy, we had to abort the ride for quite a while as intermittent showers hampered our running by a couple of hours. Unfazed by the conditions, we then headed on to a scenic inn in Tagaytay overlooking the Taal Volcano.

As soon as we went past the city of Manila, the road conditions certainly got us handful and the slippery tarmac with seemingly torrential rainfall did give us a hard time. However, the XL100’s automatic gearbox did see us to the destination and checkpoints we created. TVS only sells the kick start variant of the XL100 in the Philippines unlike the more advanced i-Touch start retailed in India and some words should be spilt on the traditional kicker. 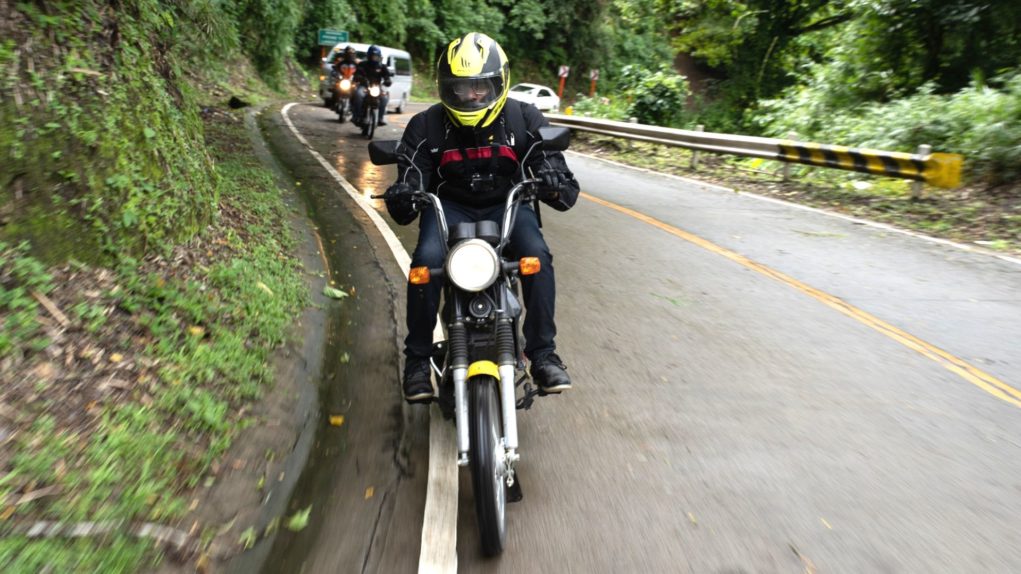 The kicker was fluent enough to get going and even during the stop-and-go traffic scenarios when the moped was turned off, the XL100 could be cranked back up in a matter of seconds. The overhead view of the twin lakes with clouds floating through the thin air and dipping in the altitude underneath and hiding on the mountain shades was a sight to behold. We sat there and discussed how the moped performed whilst munching through the lunch.

Fingers were pointed on the other side of the lake where our next destination was assigned. The narrow roads saw us tackling through the terrains as we negotiated the steep descend in Batangas and reached the Laurel lakeside. Our love affair with the rain continued as the sudden crests and hidden dips made manoeuvering a lot trickier as the XL100 did not have enough power at its disposal to punch through the mammoth climbs. 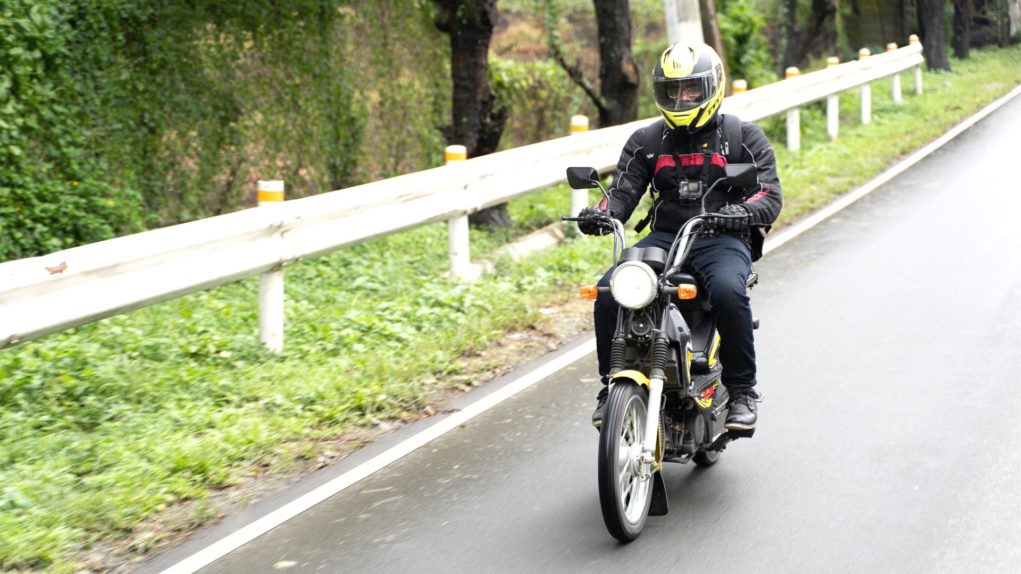 The highly smooth 99.7 cc single-cylinder four-stroke engine develops 4.35 PS maximum power at 6,000 rpm and 6.5 Nm of peak torque at 3,500 rpm. The powertrain is more suited for relaxed riding due to its performance numbers and the seat layout will compliment you with comfort. It is designed for easy commuting on an everyday basis but for a country like the Philippines not having a vast landscape like India, it is indeed ideal for weekend getaways.

We called it a day in Malarayat after traversing 200 km knowing that the next day was going to be even tougher. As much as I wanted rushing to the bed, I could not stop pondering over the cultural shift the XL100 has been experiencing in the Philippines and with that mindset, I approached the yellow XL100 wearing my neon helmet bracing up for another adventurous day. 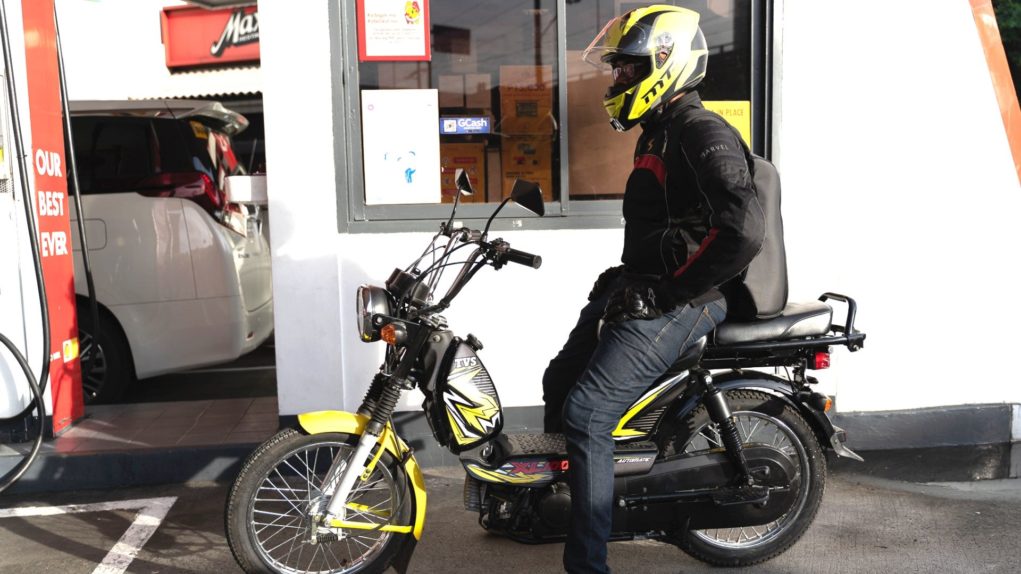 Talking about colours, the XL100 available in the Philippines does not have any design changes as the traditional round-shaped headlamp, tall handlebar, compact rear end and sturdy front parcel space as well as grab rails remain identical. However, new contrast graphics and multi-coloured fender based on the body colour chosen are part of the package in the archipelago.

We pulled over at the Philippines national hero’s house, Rizal Shrine in Calamba, Laguna and to get there we had to navigate urban traffic and jammed up streets where it was too easy to fall victim to a different direction. Due to its lightweight nature and sleek body, the XL100 was a certain charm on our way to Calamba as the easy handling characteristic is another reason why people across different age groups prefer to own this moped. 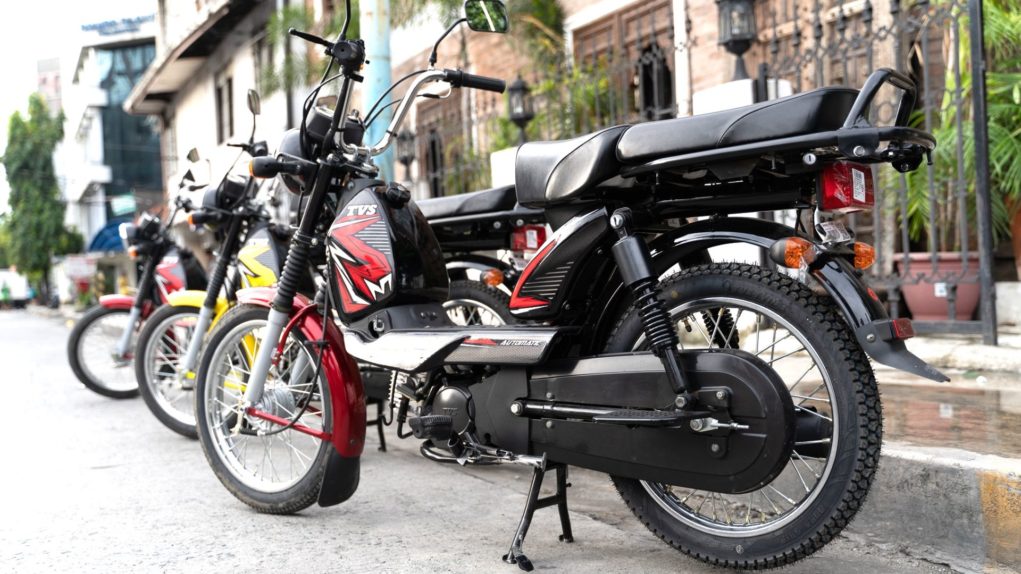 It felt as if it was built to do this over and over again without compromising the fuel efficiency. We hit the broad national roads ahead of our final destination at Pililla Windfarm in Rizal. After riding many kilometres on the rather impressive highway, the path to reach the final summit had flowing corner as we travelled uphill for the most part and down the peculiar landscapes of the beautiful nation.

It was ideal to discuss on the tyres of the XL100 as the wet tarmac resulted in relatively less traction. The slim 16-inch spoked wheels were ideal on a sunny day but we did really have our eyes opened on the wet and gravel surfaces. The TVS XL100 global diaries came to a close with dinner at Bulawan as we returned back to where we started at Wheeltek Buendia. 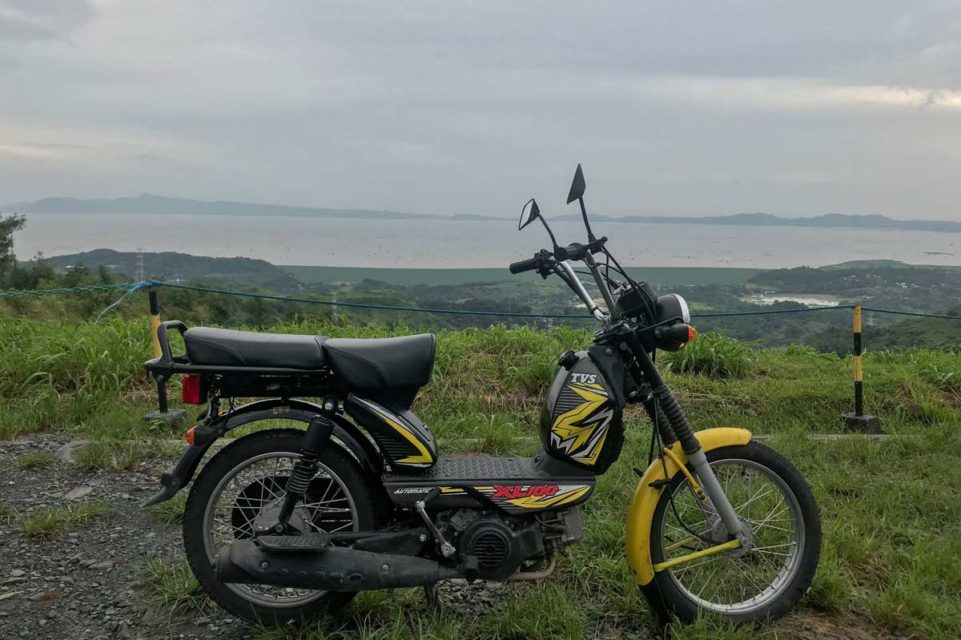 Being a global product, the XL100 did leave a lasting impression on me due to its easy to ride nature and the supple load-carrying abilities. When we reached the Pililla Windfarm with a beautiful backdrop, it dawned on me that the utilitarian characteristics of the moped are a major advantage for its success in countries like the Philippines where styling and performance are key and the XL100 ticks both those boxes.

At the literal end of the day, I had a big grin on my face and I was sure that the owners would feel the same way not just in India but elsewhere too!