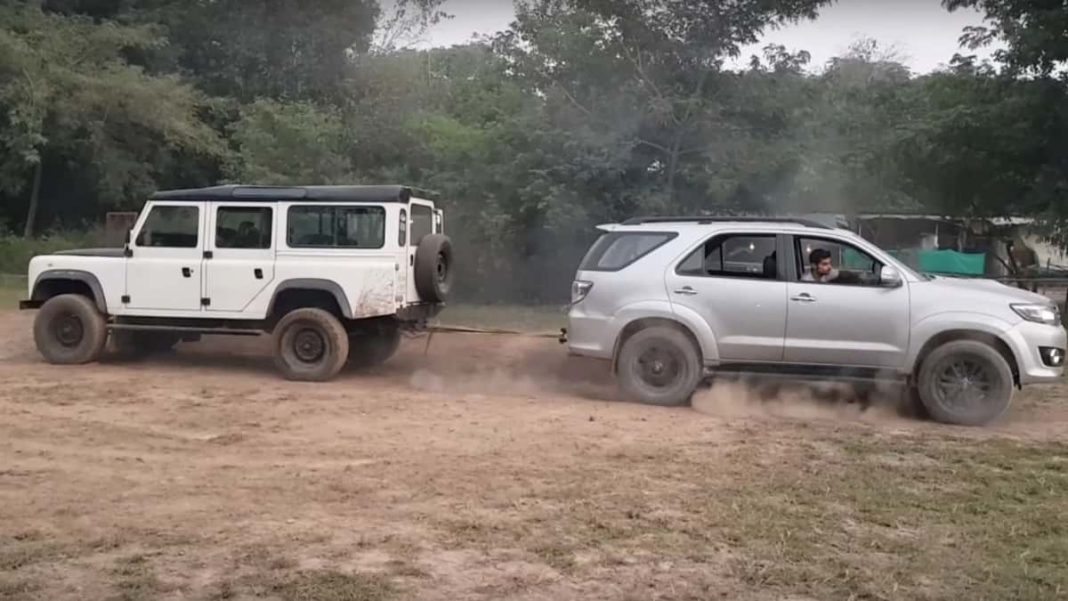 A video of an unusual battle between the previous-gen Toyota Fortuner and a Land Rover Defender 110 has been uploaded by Gagan Jassar on YouTube. The Toyota Fortuner is considered a pretty capable SUV in India, and has its own cult following, but let’s take a look how well it can perform in a tug of war against the Defender 110. Caution: Not for faint-hearted Fortuner fans!

The Fortuner used in the video, which is a 4×4 version of the previous-gen model, can be seen fighting for traction, with all its four wheels spinning in a bid to move the Defender from its place. However, the Defender does not seem to break a sweat and stays well-planted in its place. It is game over for Fortuner when it’s the Defender’s turn to pull.

The Defender barely requires any effort to claim victory and pull the Fortuner along its path. It is not clear whether the Land Rover Defender 110 used in the video has the 2.2-litre four-cylinder engine or the 3.5-litre V8 engine, which were offered with the older-generation model. The Defender 110 seen here is a five-door version, which was sold along with the three-door Defender 90.

The previous-gen Fortuner on the other hand, came with two diesel engine options, including a 2.5-litre unit that made 142 HP of peak power and 343 Nm of torque, and a 3.0-litre engine that produced 169 HP of max power along with 360 Nm torque.

Land Rover recently revealed the 2020 Defender at the Frankfurt Motor Show, which retains its overall boxy design, but features new stylish elements all around. The upcoming Defender is the first Defender to ditch the original design statement for a more futuristic approach. The car will continue to be offered with two wheelbase options, a three-door (90) and a five-door version (110).

The base price for the Fortuner in India is Rs 27.83 lakh (ex-showroom), which goes up to Rs 33.85 lakh (ex-showroom). On the other hand, the 2020 Defender will be launched in India late next year, and is expected to be priced at Rs 60 lakh onwards.