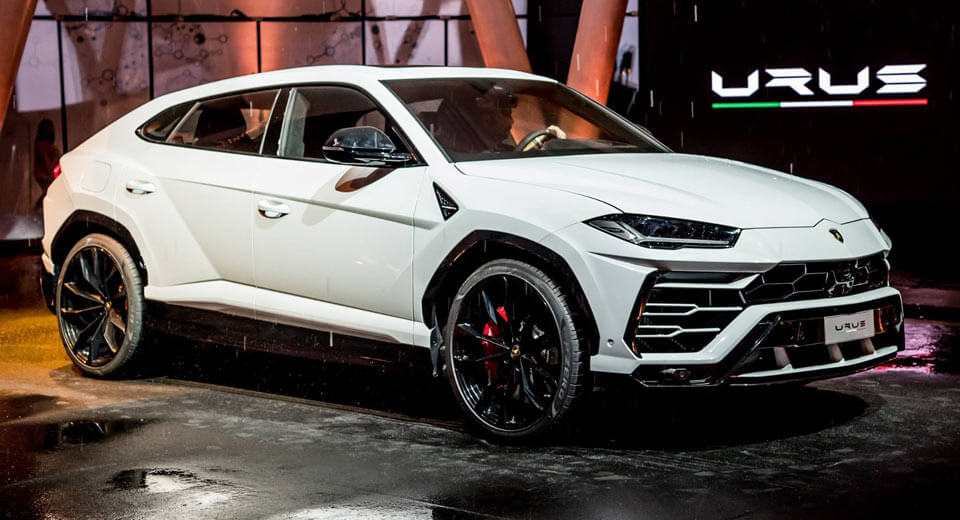 Lamborghini revealed the production version of its Urus on December 4 by marking its re-entry into high-performance SUV segment and the specs on paper are enough to give rivals a big shiver. The flamboyant Italian supercar manufacturer says the 4.0-litre twin-turbo V8 engine in the Urus will put it in the same performance mold as the Aventador and Huracan. Going by its numbers, it is hard to guess why!

The brand’s Ex CEO Stephan Winkelmann confirmed earlier this year that the first-ever Lambo SUV since LM002, the Urus, would be powered by a 4.0-litre twin-turbocharged V8 engine and it surmounted the anticipation even further. The company is well-known for its roaring V10s and V12s throughout its illustrious history but the bigger engines have started to slowly being phased out across the auto industry citing the inability for them to stay in compliance with increasingly stricter emission standards. 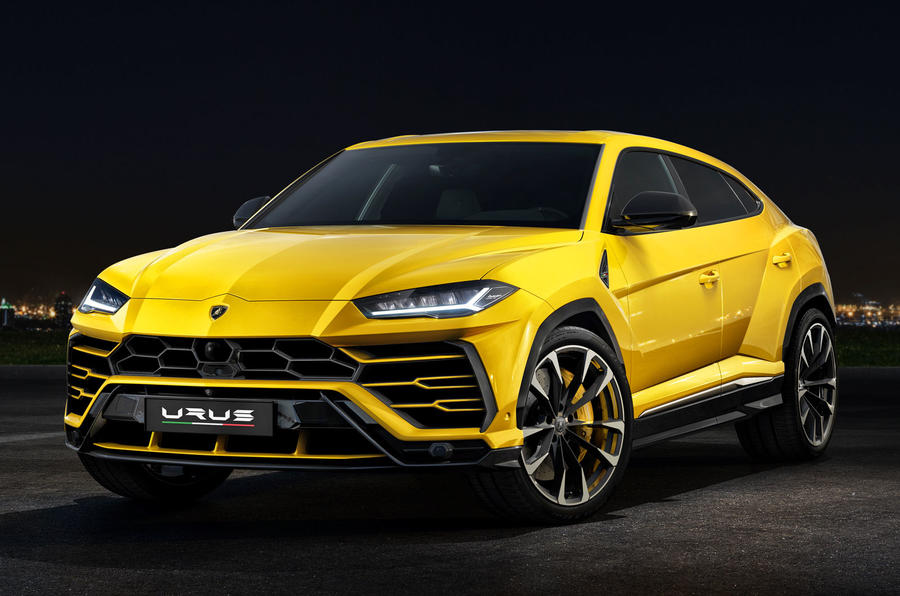 As a result, downsizing has become the order of the day with many top-notch automakers opting to go with turbocharged engines which give out healthier performance as well as sticking to emission regulations. Lamborghini’s first 4×4 since the advent of LM002 has ditched the naturally aspirated V10s and V12s found in Huracan and Aventador sports cars.

Instead of the big vees, a twin-turbocharged eight-cylinder unit with a displacement capacity of 4,000 cc has been utilised. In addition to the turbocharged power plant’s advantage of emitting less Carbon dioxides, the low-end torque and the extensive power spread across the rev range will certainly benefit the off-roading capabilities of the SUV. 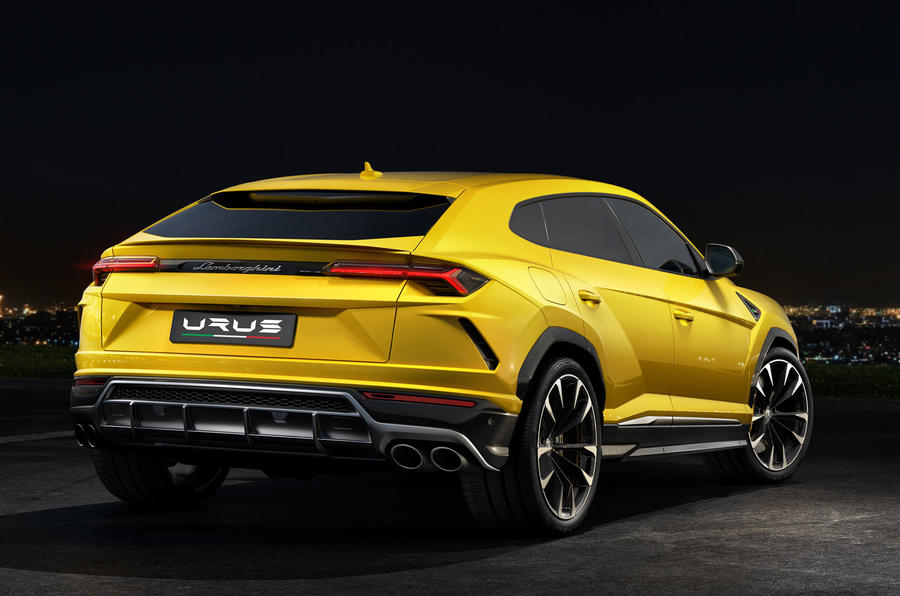 Alongside the possible plug-in hybrid version at a later time, Lamborghini appears to be determined to stick with the all-wheel drive system as well but do not rule out a rear-wheel drive savagery perhaps in the future.

Here is everything you need to know about Lamborghini’s ‘Super SUV’:

The Urus will be gracing the Lamborghini showrooms across the globe early this year and excitingly within a month of its global debut it has entered India today. Lamborghini will be expanding its local dealerships to five from three in a bid to sell triple digit numbers.

The ‘Super SUV’ comes with a price tag of Rs. 3 crore (ex-showroom). It is no secret that India has been identified as a primary target market where luxury car sales is booming every year.

An annual production capacity of 3,000 units is targetted as the SUV based on advanced MLB platform will compete against the Bentley Bentayga, Maserati Levante, Range Rover SV Autobiography and the likes.

A spurred up Superveloce model could also be on the cards in the following years. The big V8 produces a maximum power output of 641 hp and 850 Nm of peak torque enabling the Urus to accelerate from zero to 100 kmph n just 3.6 seconds – in line with its claims as the ‘fastest SUV’ in the world. 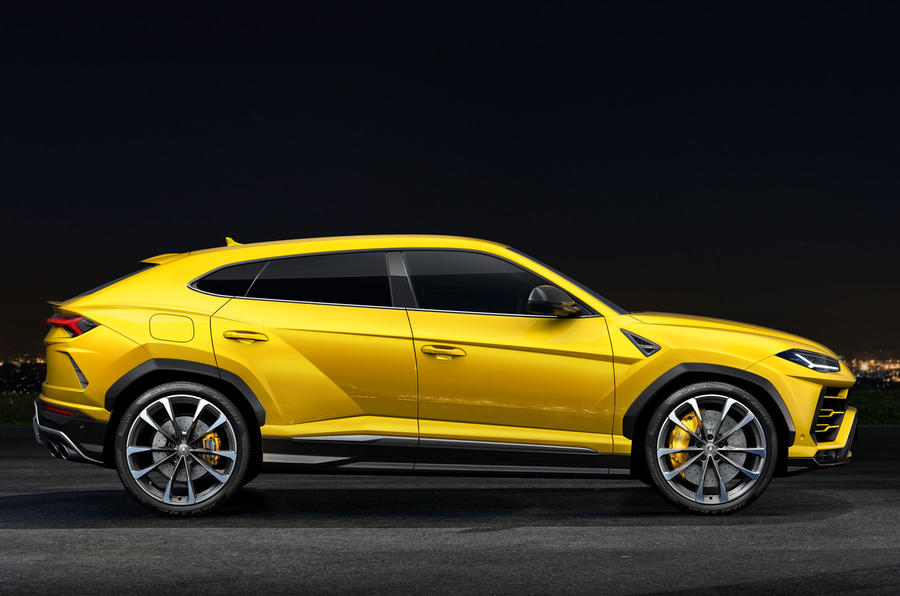 The 0-200 kmph dash is dealt in 12.8 seconds before the super SUV capable of hitting a top speed of 305 kmph. The engine is paired to an eight-speed automatic transmission and sends power to all four wheels through an electro-hydraulic mechanism. The torque converter boosts the response of the dual turbochargers while the torque splits at 40:60 front and rear ratio on the four-wheel drive system.

On demand, the front wheels will get 70 percent of torque and in different cases the rear axle can be subjected to as much as 87 percent torque. The Urus does have plenty of characters of its supercar cousins and borrows the rear-wheel steering from Aventador S. It is tuned in such a way that at low speeds the counter phase steering helps in maneuverability and the in-phase at high speeds aiding in stability to give confidence to the driver. 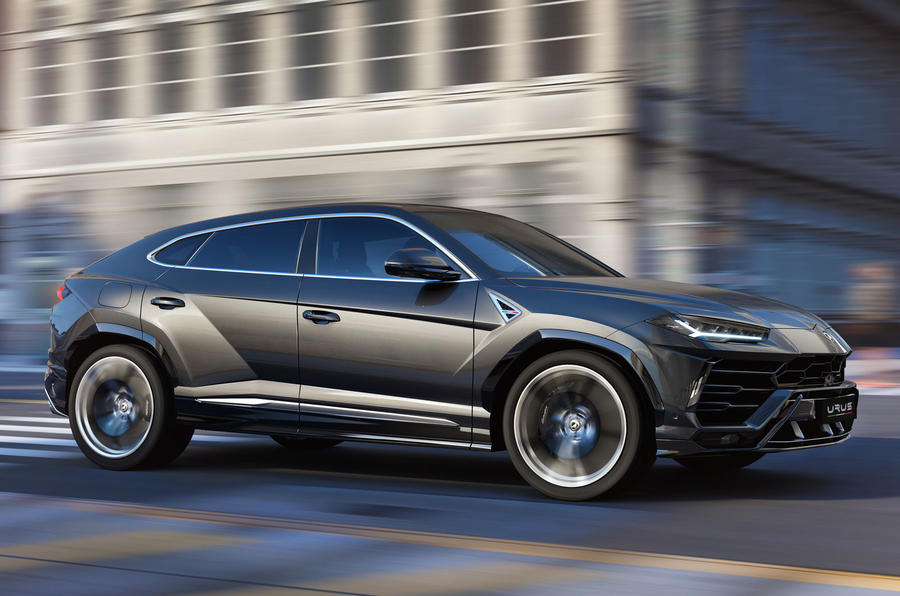 To achieve better COG (Centre Of Gravity), Lamborghini has mounted the turbo engine as low as possible while the central turbocharger is placed near the combustion chambers for increased engine response. Stepping inside the cabin, you will be treated with six different driving modes: Strada, Sport, Corsa, Terra (Land), Sabbia (Sand) and Neve (Snow).

They are accompanied by a custom mode called Ego where driver can pre-determine the setting according to his needs. The Neve, Terra and Sabbia modes have the suspension raised for more ground clearance while the other three settings are performance based and will have the suspension, steering and dampers adjusted to eke out maximum handling and output from the SUV. 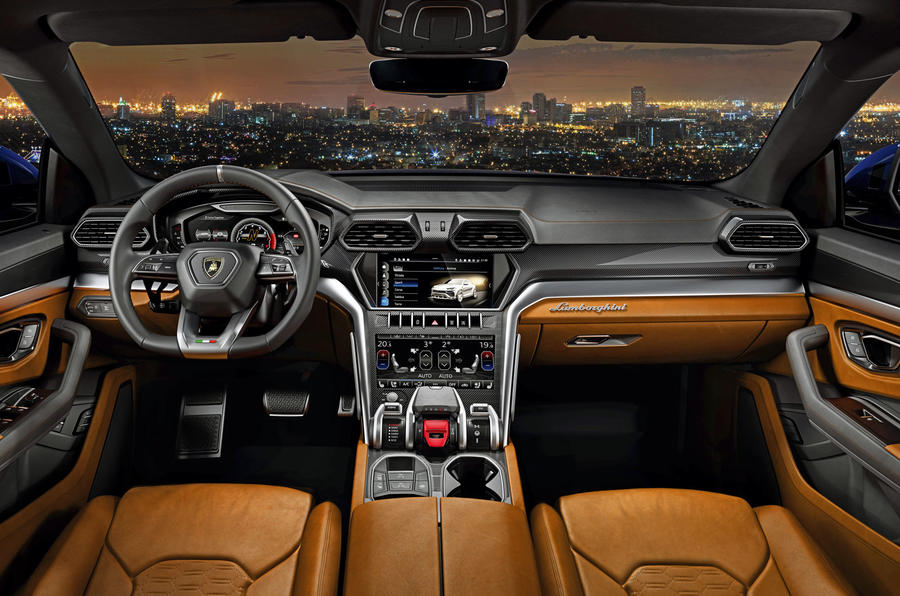 The Lamborghini Urus measures 5,112 mm in length, 2,016 mm in width and stands 1,638 mm tall – substantially longer and wider than the Mercedes-Benz GLE Coupe. Based on the MLB Evo platform, it also features longer wheelbase than its competitors at 3,003 mm and tips the weighing scale lesser than the Porsche Cayenne Turbo at just under 2,200 kilograms. 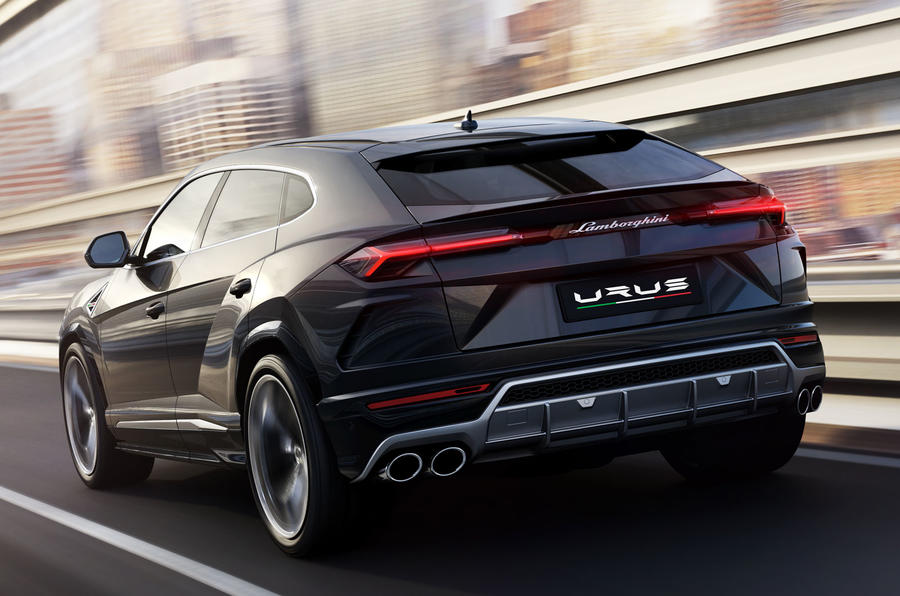 With the mechanicals and performance covered, let us talk about the most influencing factor, the looks of the Urus. It is easy to say that the concept’s styling has largely been carried forward and it is a good thing for a SUV of its proportions and stake. The Urus also has styling influenced by the LM002 and has 2/3 body and 1/3 window ratio as in the Aventador or Huracan.

It boasts a striking diagonal bonnet lines, sleek front lights, LED Daytime Running Lights in traditional Y shape, large air intakes, etc. The rear diffuser system with integrated double round exhaust pipes has been a brainchild of the brand’s learning on track. When you have stopped admiring the exterior, the cabin will drool for me.

The Urus’ dashboard features latest technologies from the Volkswagen Group with a bit of Italian flare as it has hexagonal theme. In a similar fashion to the flagship Audi sedans, it has digital gauge cluster and a twin digital display screen: one for infotainment and the other for HVAC controls.

The air-con controls are from the familiar parts bin of Huracan with the centre console having a same engine start and stop button with flip switch in red colour. Other notable features are a touchpad controller and driving mode switcher. 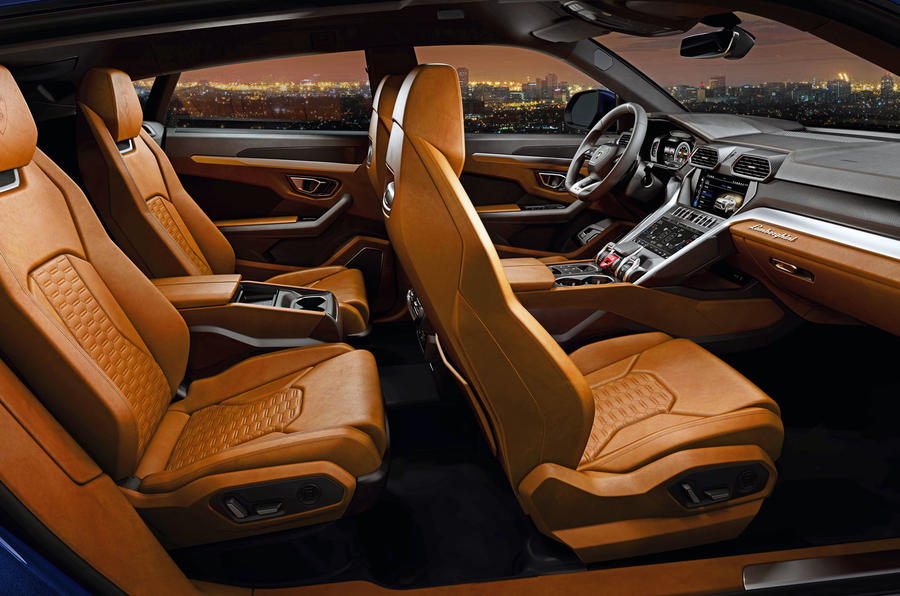 The Urus comprises of three-spoke steering wheel along with technologies like vibration damping, fully digital TFT display, High Beam Assistant, parking sensors, a PreCognition system, driver and front passenger 12-way electric heated seats with option of 18-way adjustable front seats. Moreover, the unusual part as far as Lamborghinis go is the boot space and there is a plenty of room in the Urus by being a SUV. The 616-litre capacity can be expanded to 1,596 litres when the rear bench seat is lowered.

The LIS infotainment system has voice command function and allows users to integrate smartphones via Apple CarPlay or Android Auto connectivity. As standard, the Urus gets an eight-speaker audio with Bang & Olufsen 3D sound system and 1,700 watt output as an option. The Urus is priced from $200,000 (Rs. 1.28 crore) in the US and the first deliveries are expected to begin in Spring this year. 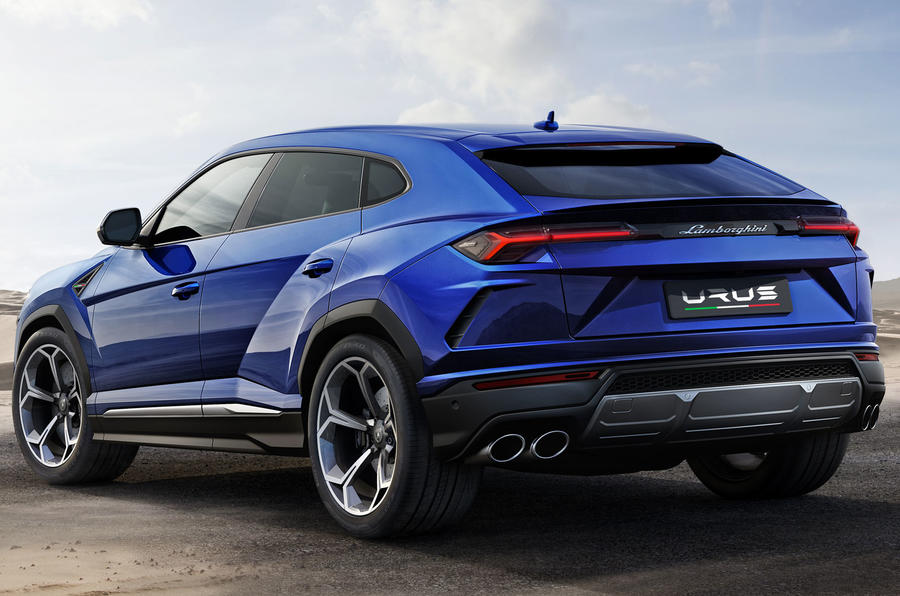 Lamborghini is reportedly aiming to set the production SUV lap record around the Nurburgring early next year. Currently Alfa Romeo’s Stelvio Quadrifoglio holds the record with a time of 7 minutes and 51.7 seconds as it beat the Porsche Cayenne Turbo S by more than eight second margin. With the performance to back it up, we can expect the Urus to comfortably get the better of the other Italian SUV.