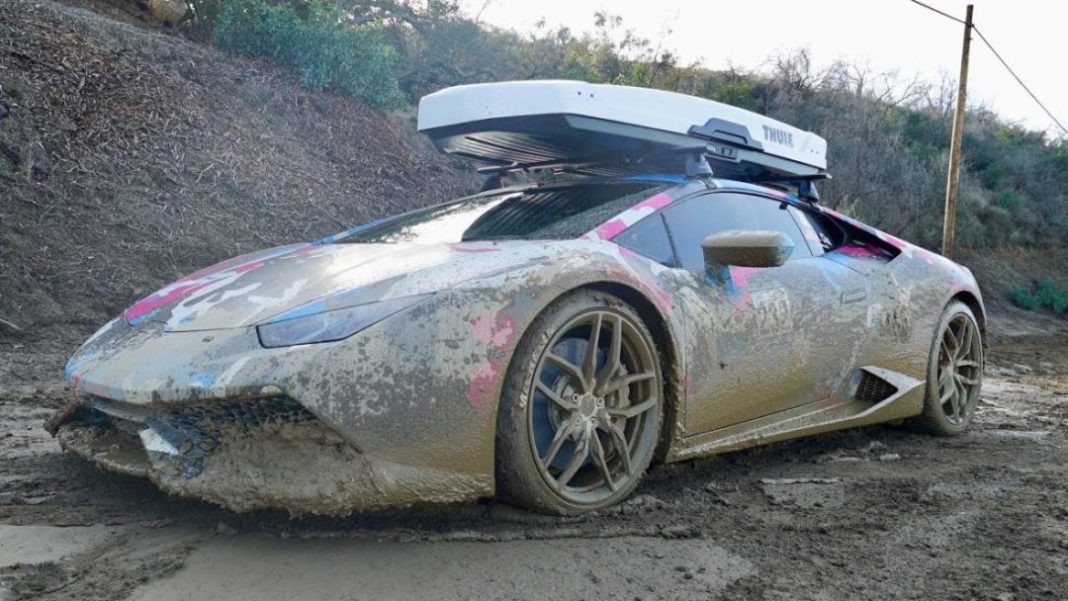 Lamborghini Huracan is one of the most brutal supercars around but what happens when it goes off the road? Here’s a video answering this question!

The Lamborghini Huracan is among the most aggressive supercars around. It is lethally fast on a race track and can demolish records on a drag strip. The Huracan has been designed to be fast and have just too much fun on the well paved tarmac. But here is a video that shows it going off the road.

The pimped up Lamborghini Huracan has a really cool wrap and a rooftop box. It has been driven to a slushy region, which is owing to the heavy downpour the previous night. The driver of the supercar decides to have some fun by driving his supercar where only the most capable of 4×4 SUVs tread.

He puts the vehicle in the Corsa mode through the steering-mounted buttons. This mode disengages many electronic safety features and sharpens the throttle response. In the stock version, the Lamborghini Huracan outputs a maximum power of 602 bhp and a peak torque of 560 Nm.

However, the modified Huracan that you see in the video outputs 800 bhp. The 5.2-litre naturally aspirated V10 engine of the Italian exotic has been turbocharged by the owner of this vehicle. With the Corsa mode engaged and the extra power, this Lamborghini is some serious fun on the slush.

While the supercar can be seen tackling most of the hurdles easily, the driver later reveals that his car was overheating abnormally. He says the reason for this is the clogged air dams and the radiators not working efficiently.

The owner of the Lamborghini Huracan also says that his supercar features a paint protection film, plastic skid plate under the front bumper, and a wire mesh protection to save the front radiators. In spite of all the planning, however, his supercar just about manages to remain unharmed.