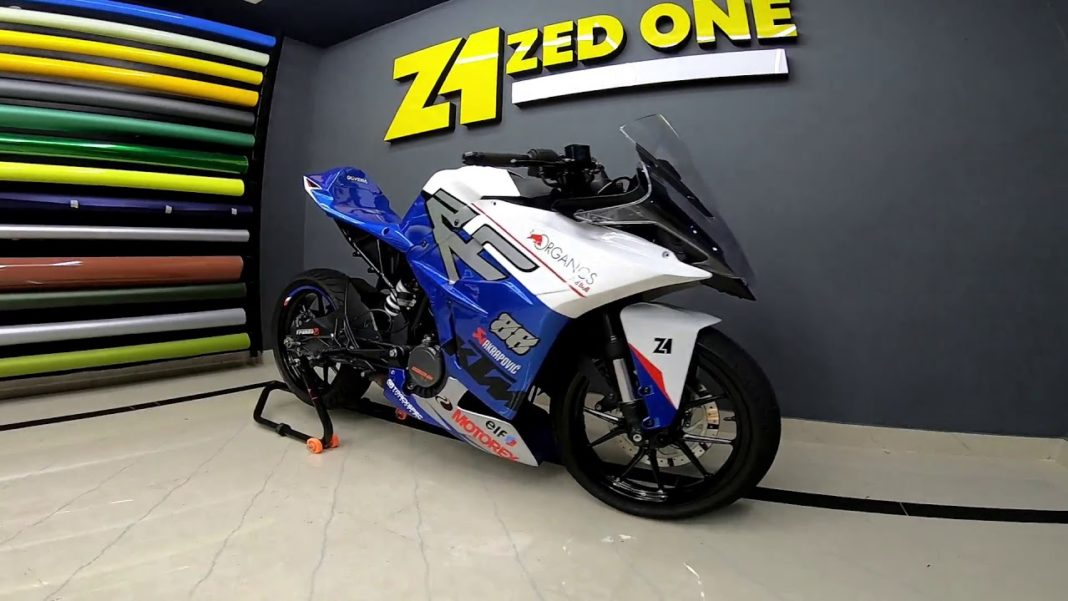 The RC200 is a power-packed hardcore supersport having a package not many have tried to replicate. Catering to young enthusiasts wanting a speed machine that can do track days during the weekends, the KTM RC200 is also the most powerful in its class and it does not have any direct rival in that particular displacement when we dig deeper considering the aggressive riding position and features.

The Bajaj Pulsar RS200, which the RC200 shares engine with, is more of a touring focussed motorcycle alongside having sporty riding characteristics. The KTM Duke 200 and RC200 have the supple knack of being accustomed to modifications and we have seen several examples of them. Here is an RC200 that has carries a strikingly hot livery as no compromises have been allowed.

Ditching the signature black and orange livery, the custom KTM RC200 you see here carries the dual-tone white and black colour scheme. The white and blue shades do remind us of the KTM Tech 3 MotoGP RC16 colours as we wished the creators had added the metallic orange bits to spruce things up. The signature RC graphics can be clearly viewed from the sides but in a more pronounced state.

Perhaps, the competition number 88 pays tribute to Portuguese rider Miguel Oliveira. The black multi-spoke alloy wheels as opposed to the orange wheels and the branding stickers add flare to the custom design of the motorcycle and no performance changes appear to have been made. KTM India introduced the BSVI compliant RC200 and RC390 earlier this year, priced at Rs. 1.97 lakh and Rs. 2.48 lakh respectively (ex-showroom) with a price increase of just over Rs. 6,000 for the former.

Besides the engine updates to meet the BSVI emission standards, the BSVI RC range received new graphics as well. The KTM RC200 is currently powered by the same 199.5 cc single-cylinder liquid-cooled fuel-injected engine without any drop in power and torque outputs compared to the BSIV unit.

It develops a maximum power output of 25 horsepower at 10,000 rpm and 19.2 Nm of peak torque at 8,000 rpm. It is connected to a six-speed transmission and the BSVI RC200 is fitted with a dual-channel ABS system instead of a single channel unit in the BSIV model.