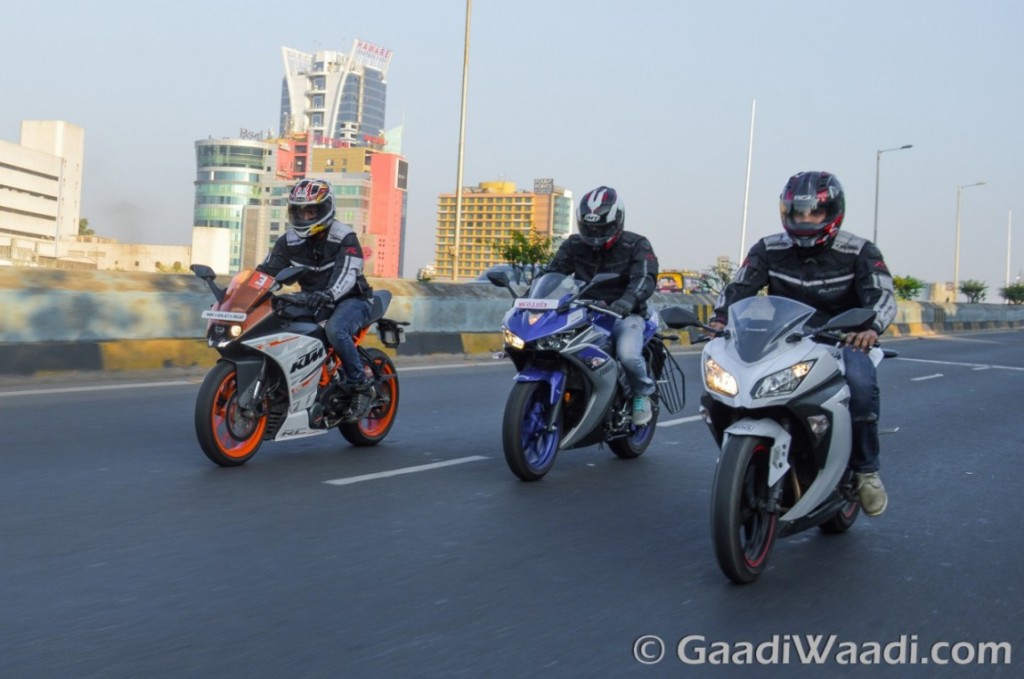 Today we compare them in the form of the Yamaha R3, RC 390 and Ninja 300. The new R3 brings back its competitors like RC 390 and Ninja 300 back to the comparison table and promises to be quite a handful when we reviewed it on the track. We had to put them into against each other and ride them back to back to get an idea of how things work and which is best for your money and your choice of preference. 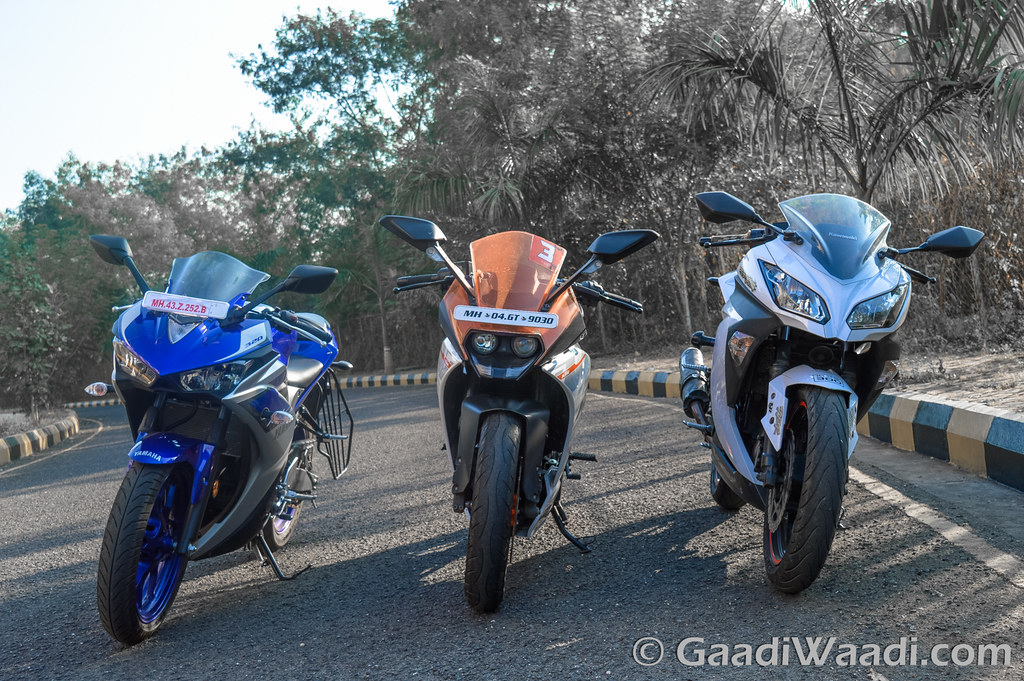 Styling wise the R3 is the fresh of the lot and the other’s are not that behind as they are fresh of the lot too. Ninja 300 does look special as it looks exactly like a scaled down ZX-10R from all angles. Headlights are angular and sharper and clearly taken from elder siblings. Side fairings with vents also gets the purposeful look. Rear is a bit disappointing which we have been telling you for some time now and Kawasaki has done nothing to change either. Exhaust and alloy wheels still looks great and add flair to the motorcycle.

R3 has the same things good about it (Exhaust and alloys) The side fairing panel on the R3 is very Japanese indeed the way it ends and it looks like sword was an inspiration. Rear end is particularly well done on the R3 and the exhaust along with tail-piece and tail-lamps does look very striking reminds of elder siblings of its own stable, the R6 to some extent. 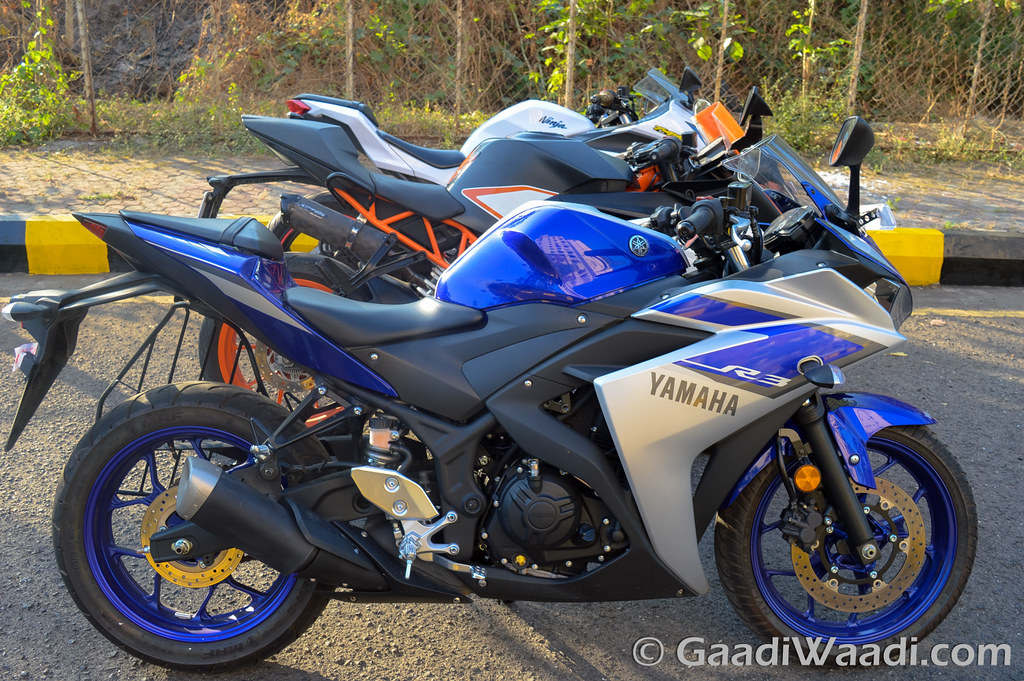 Racing blue scheme is another highlight of the motorcycle which does look very impressive thanks to body color painted wheels. Front-end and headlights are all new and we think it takes time to grown on you in some time. Overall, a striking look motorcycle with a lot of presence but isn’t beautiful like the R15 or other motorcycles of the stable. All these faired bikes have large tanks which are visible on the outside but the capacity wise its a different story as we all know.

KTM on the other hand has the alien front-end which is love it or hate it. Side fairing panels are very purposeful and are there to work rather show beauty. However, the sticker do a fine job of covering that aspect. Tail is the best part of the RC and so is rear three quarter with exposed subframe and good looking LED lamps. 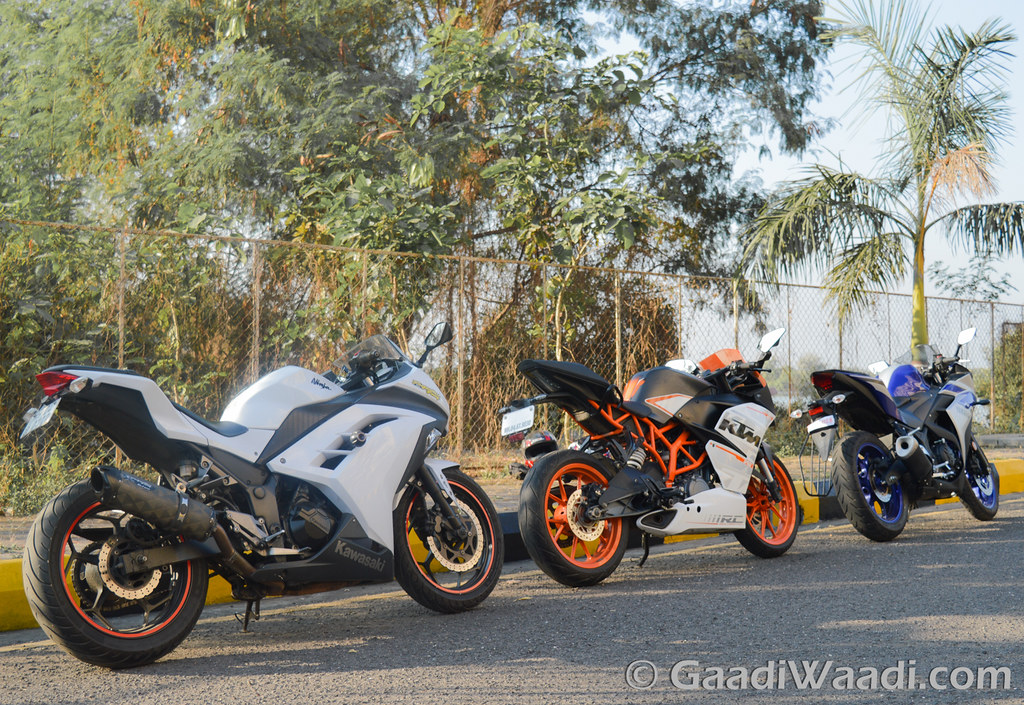 The pillion seat which is also the cowl is a just superb addition to the cool quotient. All bikes have good quality all around and fit-finish on all three motorcycles is good. However, the KTM is just a centimeter behind as there some rough edges when a closer inspection has been done. 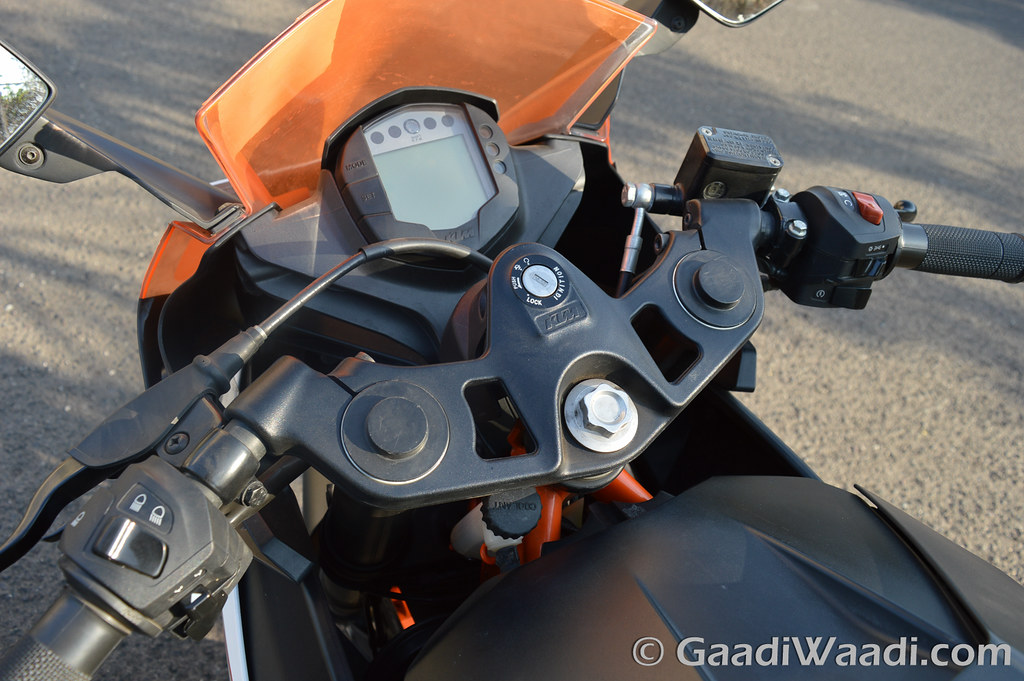 Japanese are still old fashion hence we analogue tachometer and digital speedometers, which is why we thank them. KTM on the other hand counters this with so much information such as distance to empty, average time, current and average fuel efficiency. R3 also has almost everything RC 390 has except a few things such as average riding time and average spped. R3 has a temperature gauge like the KTM but the Ninja misses out on that. 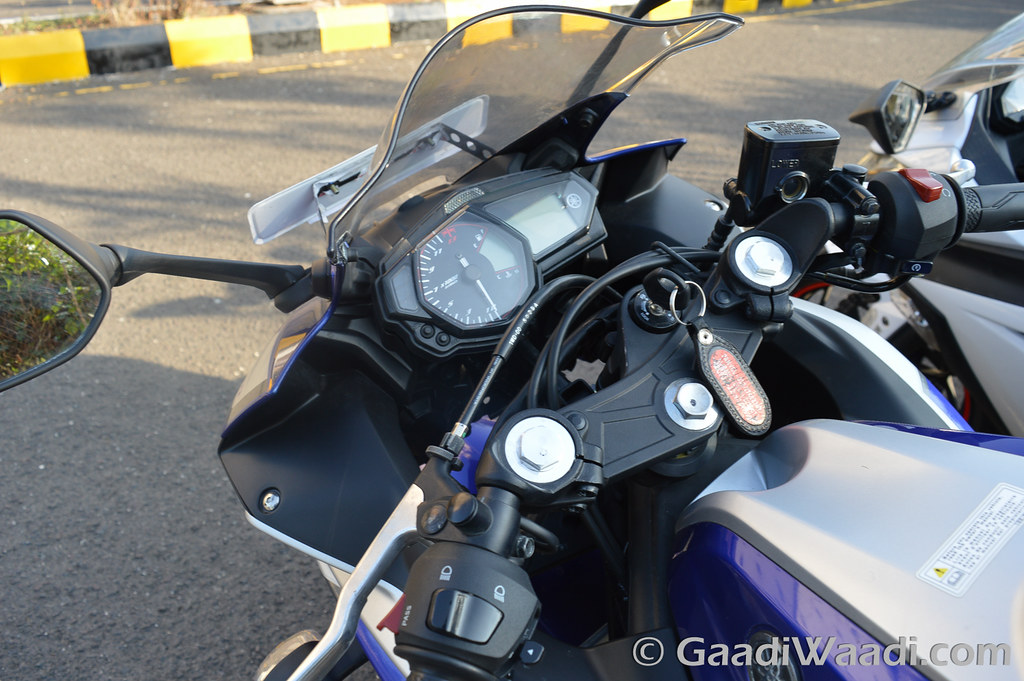 Ninja 300 has a very green meter style and has Eco mode indicator. All bikes have service indicators, engine and battery warning lamps as per each motorcycle needs. KTM also has so much information along with digital tachometer and speedo which is not so easy see while riding, but then, the way the engine revs up and down that an analogue meter cannot keep up with it hence the digital part. Switchgear is great on all bikes and feels high quality. 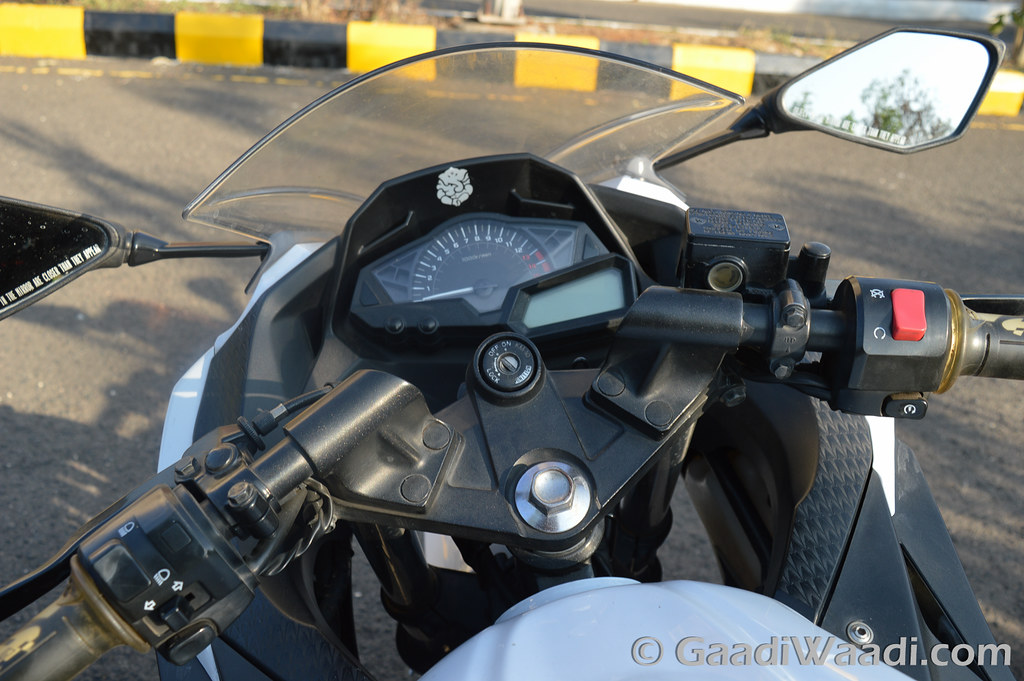 Yamaha R3 has lower set clips-ons and higher pegs which means you sit upright and you sit higher because of the height of bike gives you good view and ability duck perfectly. Tall riders can feel a bit tight on legroom. Same rearset pegs on the Ninja 300, but a bit lower means you have a lot of legroom. The clip-ons are lower and seat height is higher on it and hence it feels more dedicated and sporty than the R3. 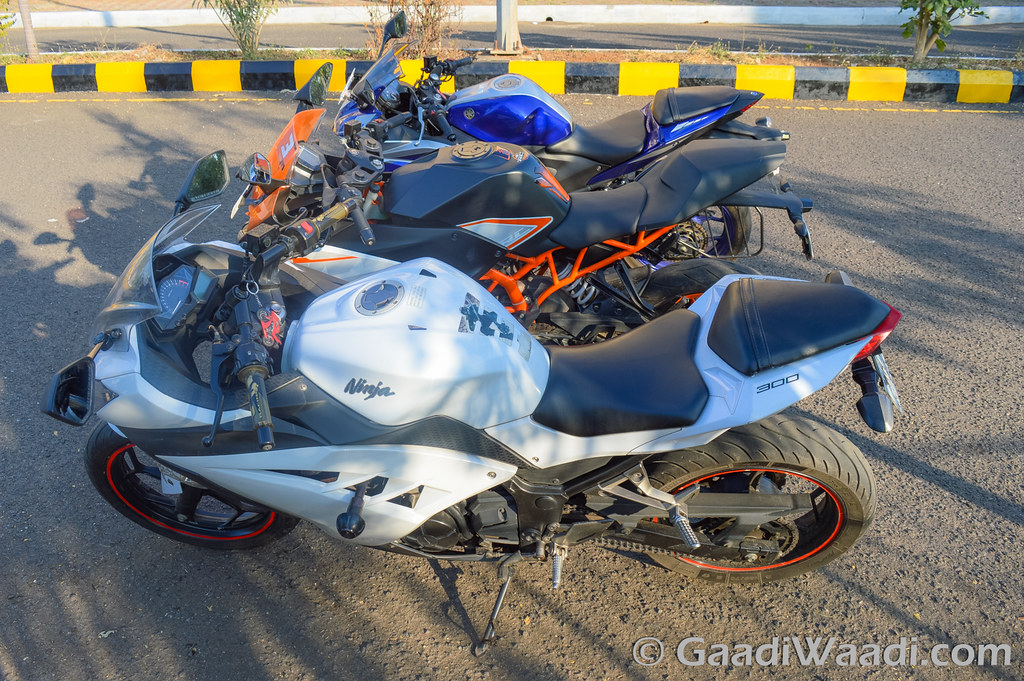 KTM on the other hand has lower set pegs, even lower clip-ons and higher seat height, which allows taller riders to feel at home and small riders can adjust just fine too because the height of the bike is on the lower side. It feels the most dedicated of the lot as the clip-ons are set far ahead too. Seat on the R3 is better, Ninja comes second and RC 390 comes last. Pillion comfort on all these bikes is mediocre and only good for short distances. You must have read our specification comparison to see which bike has what so let’s keep it simple. R3 and Ninja 300 are twin-cylinder motorcycles while RC 390 is a single cylinder. All are DOHC, liquid cooled, fuel-injected motorcycles. Ninja makes least amount of numbers and weighs the highest at 39 BHP and 27 Nm and 172 kgs. R3 comes next and makes less numbers than the RC 390 but isn’t far behind like the Ninja and R3 comparison. 2 BHP and 5.5 Nm more than the R3 and being 3 kgs lighter than the R3 means RC 390 is ahead.

All engines have good refinement, but Japanese due to twin-cylinder offer surreal even more refinement and vibrations are nill on these two. Meanwhile the RC has a bit of harshness, negligible vibes around the mid range and rest is all smooth. Heat is well controlled on all three bikes thanks to fairing and radiator fan redirecting air below rather than the side. Stress free city rideability is on the Japanese while the RC 390 knocks a little due to taller gearing power-band style power delivery. 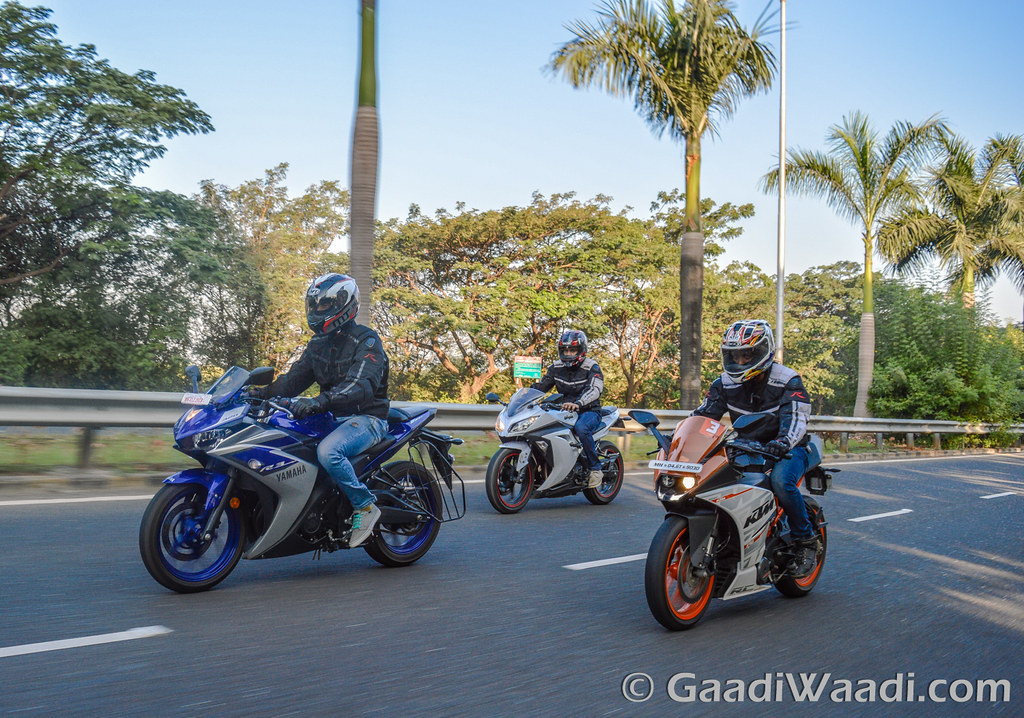 RC 390 wakes up post 5000 RPM and has the most mid range punch, but the R3 is almost there too because it has a punchy mid-range and continues to pull till the end once it reaches 7000 RPM where the power band starts and after 9000 RPM it gets really violent. Ninja 300 on the other hand has top-end biased power band, which means low and mid-range isn’t that punchy as the other two but once in the power band it catches up and that is around 8000 RPM. 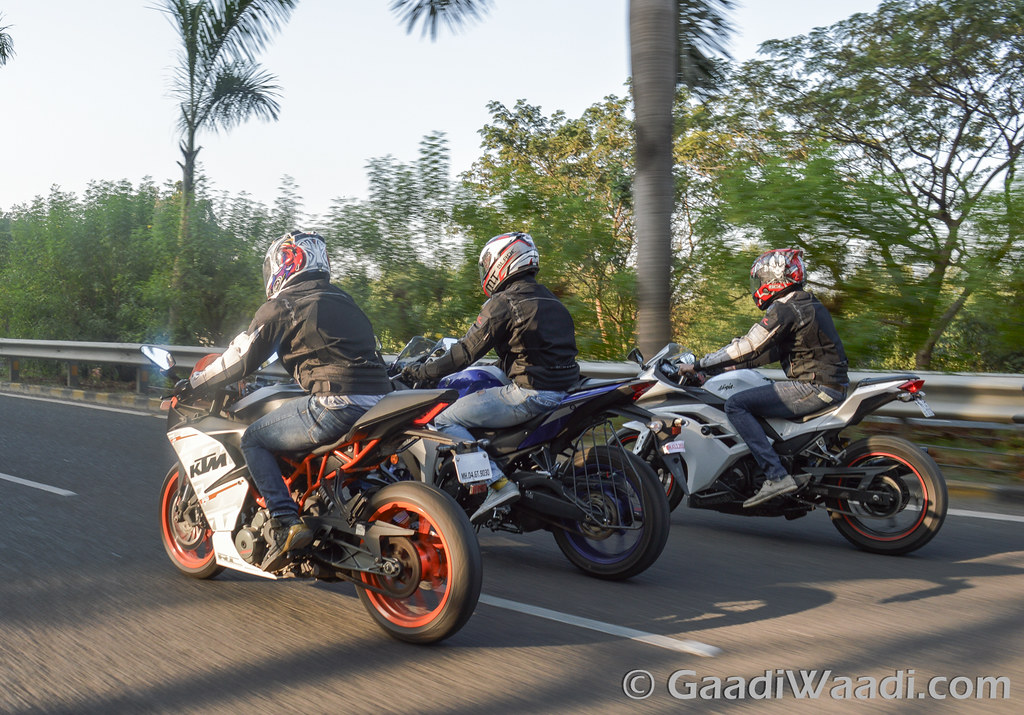 What surprises though is the R3’s engine. It is very aggressive, torquey and spins slightly faster than the Ninja and almost as fast as the RC 390. The difference is borderline, but what truly distinguishes is the way they sound and feel. RC 390 isn’t exhaust friendly as we know. Ninja 300 makes the right jet fighter inspired noises. Meanwhile, the R3, ohh, it is aggressive, quite loud for a 320cc engine is angry at redline. A typical Yamaha engine, now with more power, it’s just perfect. 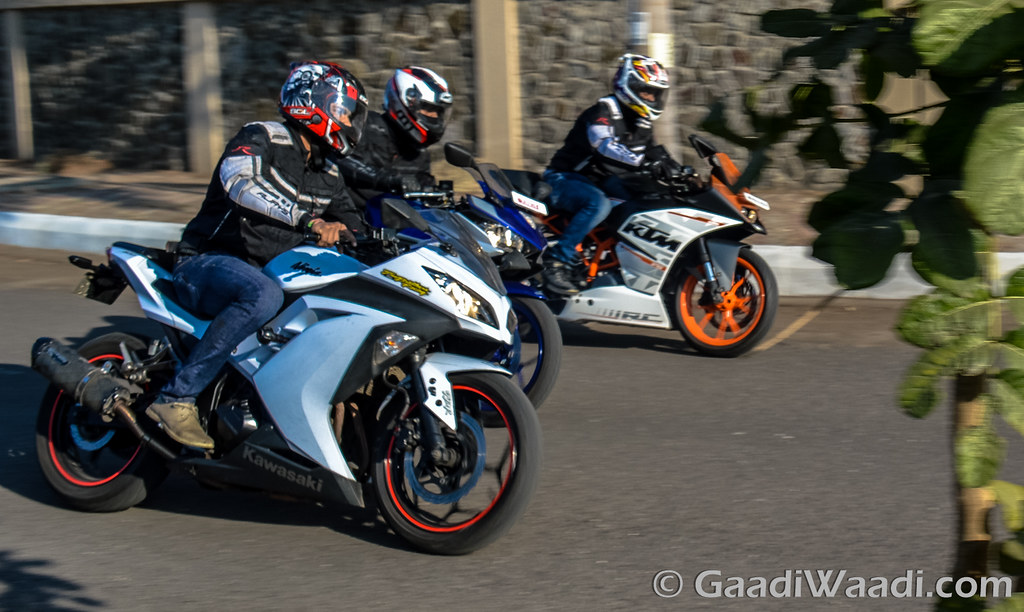 There is Yamaha and a KTM in this test so this clearly means war. Both are known for dynamically rich motorcycles. Kawasaki on the other hand with the Ninja 250 and Ninja 300 has known to make not exceptional handling machines but it does the job well but there are some downsides in terms of hardware and way it goes around corners. Ninja 300 IRC tyres don’t do justice and don’t help in handling.

KTM has clearly the light weight chassis, best turn-in, sticky tyres, ABS and stiff suspension on both ends to make sure it runs rings around the competition on the track. The immediate nature of the engine in conjunction with the chassis is just recipe for hooliganism. USD forks give really good feedback and overall its great punchy, aggressive and rockets out of the corners. 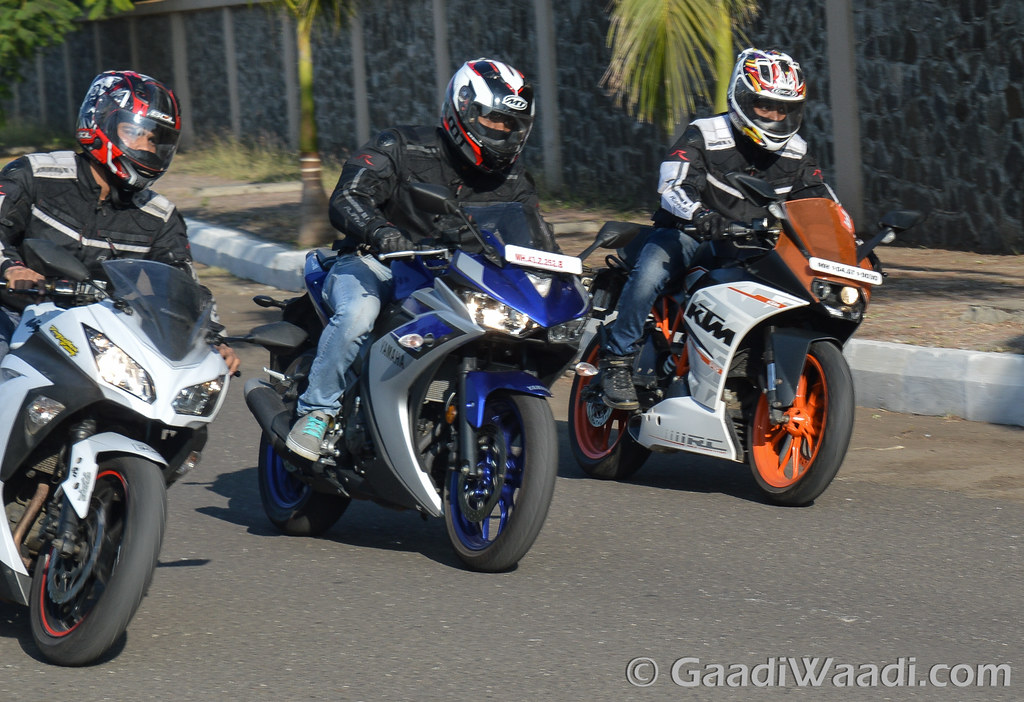 Reason why R3 shadows the Ninja 300 is because it feels a lot lighter, agile, responsive and tighter. Ninja 300 was good, but the R3 takes it down because it has better tyres than the Ninja 300 (but not the best) and both need an desperate upgrade. R3 turns in decently quick has a great front-end, perfect rake and trail balance, not too steep as the Ninja and not so inward as the RC 390.

R3 is stable through the corners and thanks to a very race inspired engine it rockets out of it very spontaneously too. R3 spins its rear wheel some times (safe enough) when you exit corner with an very aggressive throttle despite warm tyres. Since ride quality is really good like the Ninja 300 mid corner doesn’t upset the motorcycle like the way it happens on the RC 390 to some extent, which has borderline harsh ride quality but as of now we can it very stiff. 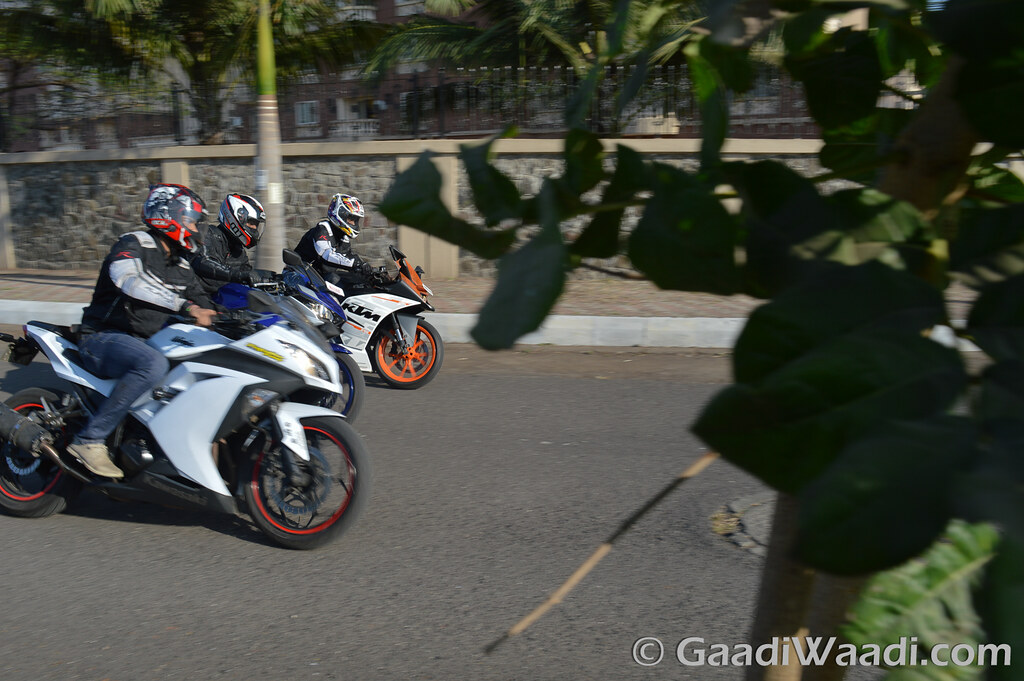 Overall, RC 390 is very feedback rich and wants attention. R3 does it well and feels very communicative in terms of engine and suspension feedback. R3 would be perfect with better tyres and wish it had atleast upside down forks at the front. Highway stability on all these bikes is rock solid even at insane triple digit speeds.

Braking is really good on R3. Best road bike brakes with very good initial bite and post that breaking is even more impressive thanks to larger rotors. RC 390 comes second as it does not have the initial bite to slow it down post that it is really progressive and adequate. Ninja brakes have always been on criticizing side and they continue to be adequate and not great. ABS is missing on the Japanese duo while RC 390 has it standard making it more safer on the Austrian bike. 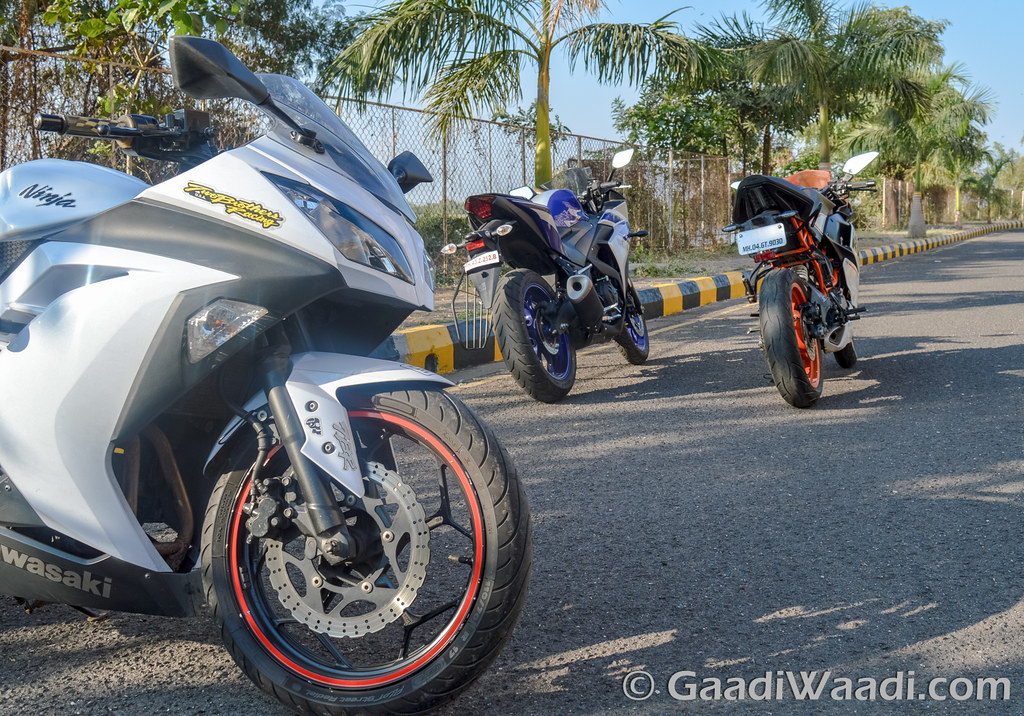 The Ninja 300 was a part of these test in the past against the KTM because it was an all rounder if you could afford one, as the pricing is been really high. In some cities it goes above Rs 4 lakhs and certainly is overpriced by a good margin. The Ninja is an all rounder as it has more comfort, better tank range, a slipper clutch and a wide dealership service network than the R3. The KTM is serviced in same place too.

KTM RC 390 is still a budget performance motorcycle, a faster and safer (standard ABS) motorcycle since the beginning it continues to do so. RC 390 is a track ready bike for the road with blinkers and headlights for Indian conditions and riders. Hence its more committed, engine is aggressive and isn’t friendly on city roads and isn’t ideal for highway either. 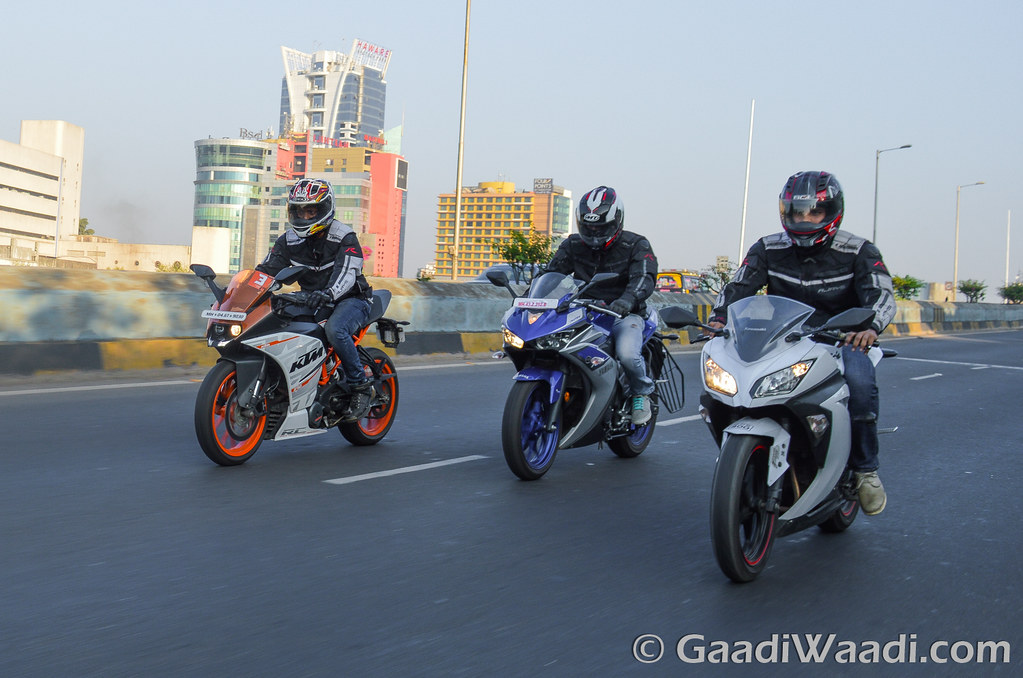 All prices are ex-showroom Delhi