Koenigsegg is notorious in making bonkers hypercars over the years and to replace an icon as fierce as the Agera RS, even merely making a try deserves appreciation. However, the Swedes have gone one better, at least on paper, with what has been dubbed the Jesko. It pays tribute to Christian Koenigsegg’s father and the nerve crunching numbers suggest that it is pitched straight up against the bad boys from Bugatti.

The Koenigsegg Jesko has a scarcely believable top speed of 300 mph (482 kmph) and the performance wizardry comes courtesy of the heavily tuned 5.0-litre twin turbocharged V8 engine, which is capable of producing a maximum power output of 1600 hp while running on E85. Christian Koenigsegg, the brand’s founder, even kept the name of his new hypercar secret from him own father until the very last minute.

And that could have sent a pleasant surprise to Jesko von Koenigsegg when it broke covers at the 89th Geneva Motor Show. His 80-year-old father played an integral part in the company’s raise to fame as one of the leading supercar manufacturers not just in Europe but across the world and helped the company with his life savings when it needed the most once. Sadly though, despite its nerdalicious numbers, the Jesko is the last Koenigseggs without any sort of electrification applied. The hypercar is the successor of the mighty Agera RS, the fastest ever to be on the road in the world. The powertrain is paired to a nine-speed transmission with never-before-seen in-house developed seven clutches and Koenigsegg calls it as Light Speed Transmission as it is that quick.

Due to the absence of synch rings, the transmission can shift from any gear to another without having to wait for synchronisation and it weighs only 90 kilograms – far less than any traditional DCT units. The Jesko is homologated worldwide means it is a street legal hypercar and its production is limited to just 125 units. It will be sold in two variants: one is a track focussed and the other is low drag.

The former uses a groundbreaking Triplex suspension system and will have 1280 horsepower on regular 95 octane unleaded gas and it shoots to 1600 horsepower and 1,500 Nm on E85. Above 1,000 Nm kick in between 2,700 and 6,170 rpm. There is a lot more clever tech going on as Koenigsegg is synonymous with attention to detail engineering.

For instance, the Jesko is not using Koenigsegg’s regular camless Freevalve heads and instead it uses a mechanism with extra tumble on the intake to boost turbulence in air-fuel mixing supplied by F1 suppliers Grainger and Worrall. The engine has triple fuel injectors per cylinder as the third injector placed in intake plenum sends in fuel directly above the intake runner for each cylinder. 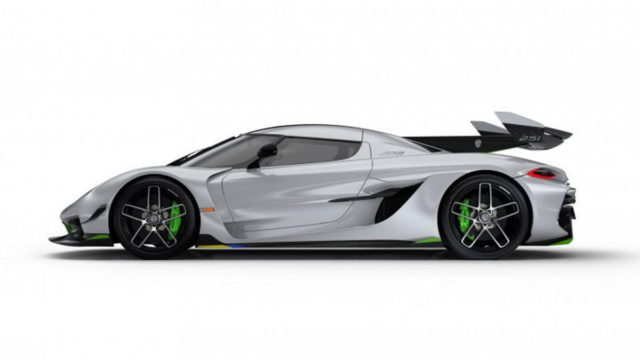 It helps in more efficient combustion as well as cylinder cooling. The first-ever in-cylinder pressure sensors aid the Engine Management System in monitoring and controlling each cylinder. The last of the hardcore V8s with mechanical prowess from Koenigsegg is upon us and there is no better way to say goodbye than being present on the 3 million USD Jesko.