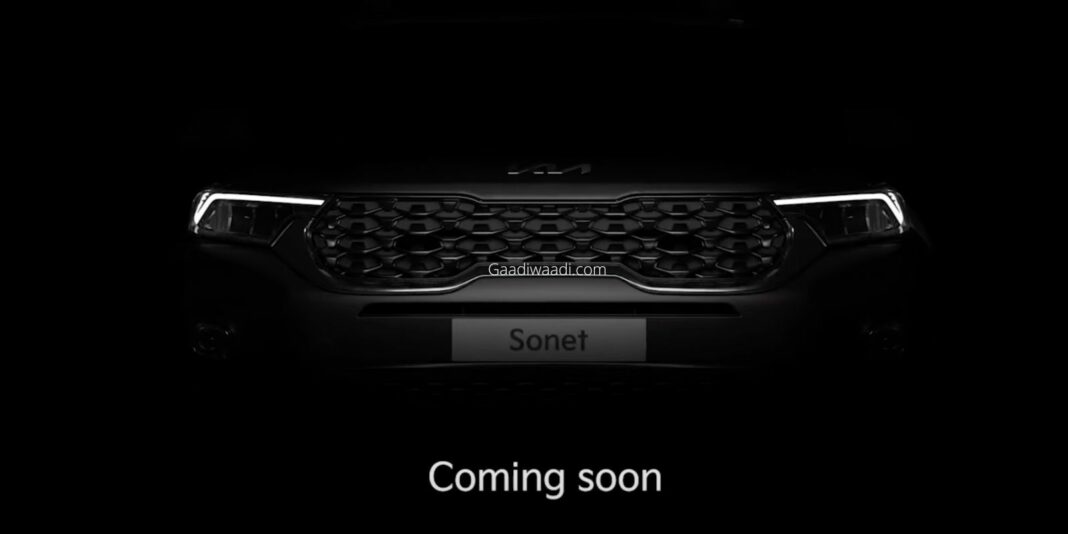 Kia India’s official social media handles have started teasing the X Line variant of the Sonet compact SUV for the domestic market and it will be launched soon. The South Korean auto major introduced the Seltos X Line last year in India and in a similar fashion, the Sonet X Line will get a number of exterior and interior revisions to differentiate itself from the regular variant.

The front fascia of the Kia Sonet X Line has been teased at the end of the video. Up front, it gains a glossy black front grille with chrome surrounds, front and rear skid plates as well as the fog lamp housing treated in black colour. The side profile is expected to get contrast highlights and door garnish while the rear could get visual enhancements as well.

The Kia Sonet X-Line will more likely come with blackened tailgate garnish, X-Line badging, bumper inserts in black and a contrast colour, etc. A set of newly designed alloy wheels with contrast accents and possibly a graphite finish could be available. Carrying a similar theme as the exterior, the cabin could get new leather seats with different stitching and black garnish across the dashboard and centre console.

It comes on the back of Hyundai announcing the launch date for the Venue N Line, which will go on sale on September 6, 2022 with visual revisions, possibly a stiffer suspension and a sportier exhaust note. The upcoming Kia Sonet X Line will likely be based on the top-end variant of the standard SUV and we do not expect any mechanical changes to be part of the package.

The equipment list will likely boast a large touchscreen infotainment system with Apple CarPlay and Android Auto connectivity, automatic climate control, cruise control, and so on.