Kia’s India division has devised an aggressive strategy to position itself among the top five mainstream manufacturers in the near future. The company is planning as many as six new models between mid next year and 2022. Kia, the sister brand of Hyundai, will be benefitted by its parent company’s vast presence in the Indian market as well.

The South Korean auto major has presence in more than 180 countries across the globe and is focussing on electrification technologies as part of a steady transformation. While the technical know how in the international markets regarding zero-emission Kias can be expected to slowly drip down into India, its initial push will deal with entry-level premium vehicles.

While reiterating that there are no plans for compact cars initially, Kia Motors India CEO and Managing Director Kookhyun Shim said when the emphasis on volume sales is considered his company will eventually build them. Kia will debut in India with the SP concept based premium SUV that will likely be positioned in the price range of around Rs. 10-15 lakh (ex-showroom).

It is expected to share several components with the segment-leading Hyundai Creta but will be slotted in a price bracket slightly above its premium cousin. Kia earlier confirmed that its first model for India would arrive in the second half of 2019 but things are looking bright for market debut in the middle of next year. 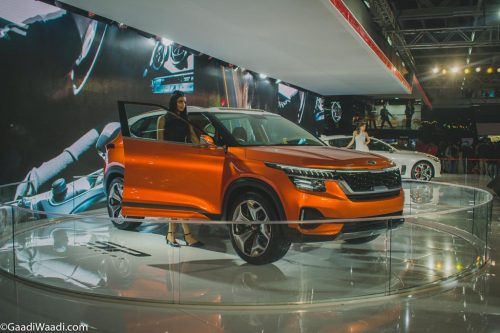 Kia does sell the i10 based Picanto and i20 based Rio overseas and they could be evaluated for launch in the coming years. However, the highly popular Kia Carnival people mover is firmly in the pipeline and it could be brought in via CKD channel to compete against the likes of Toyota Innova Crysta and Tata Hexa.

Sun Wook Hwang, Senior General Manager (Market and PR) at Kia Motors India has indeed confirmed the MPV’s launch. Another significant CKD import will likely be the Ceed hatchback and it could establish a new niche for itself. Kia has a range of premium sedans to choose from in its global lineup and we can expect a C- or D-segment model being part of the six planned launches in the next 36 months.