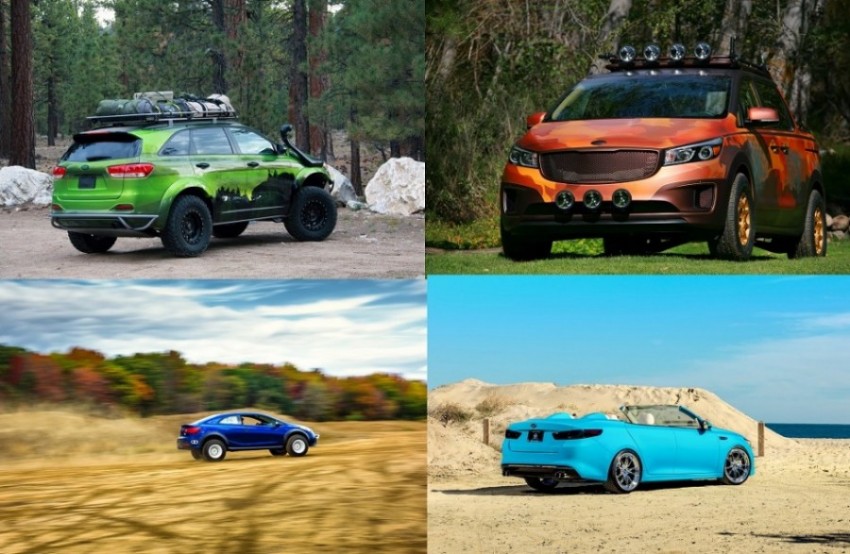 Specialty Equipment Market Association (SEMA) is the premiere automotive specialty products trade event in the world. The specialty of the show is that manufacturers took to the stage to demonstrate their custom-built machinery at the Las Vegas Convention Center in Las Vegas.

The SEMA 2015 saw KIA introduce four of its brand new concepts with all individual intents and purposes. The concepts exhibited innovative ideas spawned from the purposes that it had been built for. Here’s a lowdown of what they were all about: KIA says the A1A Optima’s nomenclature comes from the A1A highway in Florida and it’s been built with keeping in mind the “subtropical splendor” of the Sunshine State. The A1A Concept is KIA Motors’ attempt to create a car in perfect harmony with South Beach as it certainly carries a fresher look compared to the all-new 2016 Optima sedan.

The open-top concept was put together by LUX Motorwerks who had gone as far as using reinforced steel tube construction for extra rigidity due to the lack of roofing. Courtesy of the Ksport coil-over sport suspension, the ride height is desirably lowered.

On the outside, the A1A concept features a vibrant turquoise paint scheme and chunky 20″ HRE S104 wheels which are thematic to the South Beach customs. Another luxury makeover was for the rear doors that swing open on rear-mounted hinges.

Separated by extended armrests, there are custom bucket seats at the front and back – topped off by a peculiar center console. The A1A Optima concept gets a 2.0-litre turbocharged engine developing 245hp and a custom made exhaust system. PacWest denotes Pacific West here, as the Adventure Sorento focusses its attention on cities of Seattle and Portland where the natives prefer driving through the abundance of terrain lands. Under the hood, the PacWest Adventure Sorento packs a 290hp motor with a WFJ snorkel intake system.

Designed and hand-crafted by LGE-CTS Motorsports, the PacWest Adventure Sorento was custom painted using a process involving pearls and candy effects. Consequently it received a chameleon effect and six inches of ride height thanks to Fox Racing 2.0 coil over shocks, Eibach springs, twin LED light bars, an all new bumpers at front and rear in addition to the under carriage assembly. Custom made by LGE-CTS Motorsports team as like the Sorento, Photo Safari Sedona was built for the people of Northeast American region. The tubular steel roof rack was fabricated in consultation with professional photographers who had given suggestions for building other parts of the concept vehicle as well. Mounting DSLR and WASPcam sports camera systems will now be an easy task with the carefully constructed rack that is sturdy enough to support a photographer.

Equipped with a Street Scene Speed Grille, the Photo Safari Sedona can adjust the ride height with the presence of Hellwig auto level 2,500 lb airbag suspension system. The middle seats have been removed as the extra space on the inside facilitated for transforming the car into a professional editing studio with a 27″ iMac and 5K retina display, clever wasn’t it? Forte Koup Mud Bogger, like the name suggests its focal point is on mud racing. Pat on the back for Lux Motorwerks as its custom-built team was at it again for developing a purposeful Koup.

It is equipped with Sparco EVO II Red Race Seats, off-road tyres, Sparco L575 steering wheel, modified fenders and side skirts, panoramic roof and ample ground clearance. It can be a handy off-roader as well with the bulkiness and fat tyres.