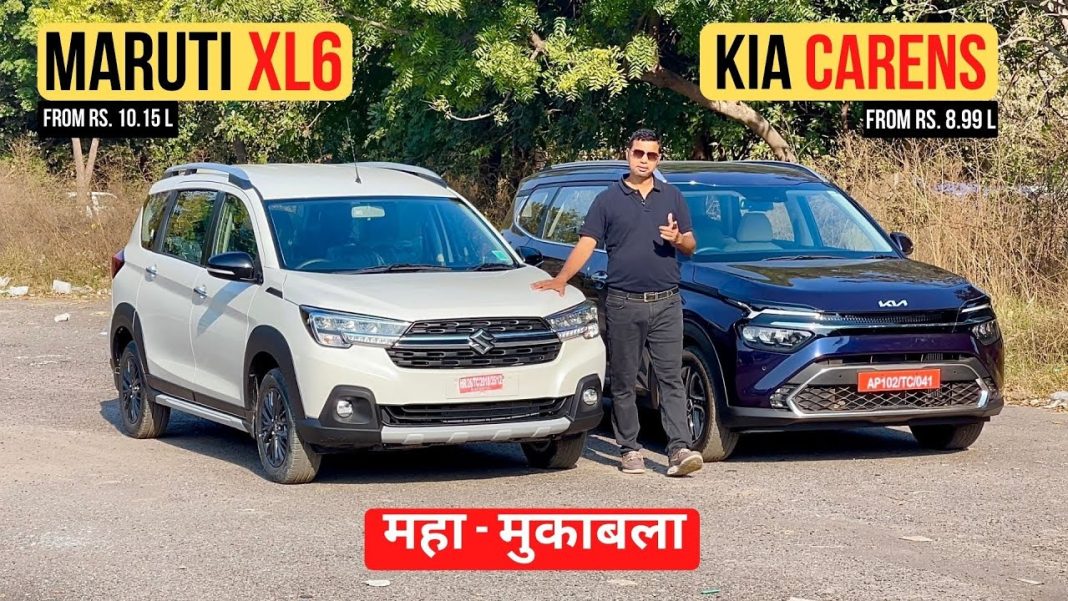 Kia Carens is pitted against Maruti Suzuki XL6 in this detailed comparison video as all the aspects related to performance, interior, features, etc are analysed

Kia India introduced the Carens three-row UV only a few days ago and it has been well received amongst customers. During the price announcement, Kia said that the pre-bookings had crossed the 19,000 mark already within a month and more than 50 per cent of the reservations were for the diesel variants.

The waiting period stands at around 14 weeks depending on the engine and gearbox combinations and the production will be ramped up to meet the demand. The Carens is priced between Rs. 8.99 lakh and Rs. 16.99 lakh (ex-showroom) and the highly aggressive price range is one of the primary reasons for customers wanting to own the vehicle.

The Carens can be bought in six- and seven-seater configurations and due to its price, it targets customers seeking top-spec versions of the compact SUVs, entry- and mid-level five-seater midsize SUVs, and MPVs like Maruti Suzuki Ertiga, Maruti Suzuki XL6, Mahindra Marazzo, entry-level variants of the Toyota Innova Crysta and midsize seven-seaters like the Hyundai Alcazar.

To give you a clear idea of which is the better MPV we have posted two separate comparison videos featuring Maruti Suzuki Ertiga and Maruti Suzuki XL6. Here we have attached the Carens vs XL6 detailed comparison video. The XL6 is essentially a more premium version of the Ertiga with a middle-row captain seating arrangement.

Since the Carens can also be had with six seats, the comparison analyses all the practical bits along with the performance, design, feature and price aspects of both these vehicles. The XL6 is available only with a 1.5-litre four-cylinder K15B petrol engine producing close to 105 PS maximum power and 138 Nm of peak torque.

It is paired with a five-speed manual or a four-speed torque converter automatic transmission. The Kia Carens, on the other hand, can be had with a 1.5-litre petrol, a 1.5-litre diesel and a 1.4-litre turbo petrol engine. The NA petrol kicks out 115 PS and 144 nm while the solo diesel delivers 115 PS and 250 Nm. The turbo petrol pumps out 140 PS and 242 Nm. A six-speed manual, a six-speed AT and a seven-speed DCT are gearbox options.