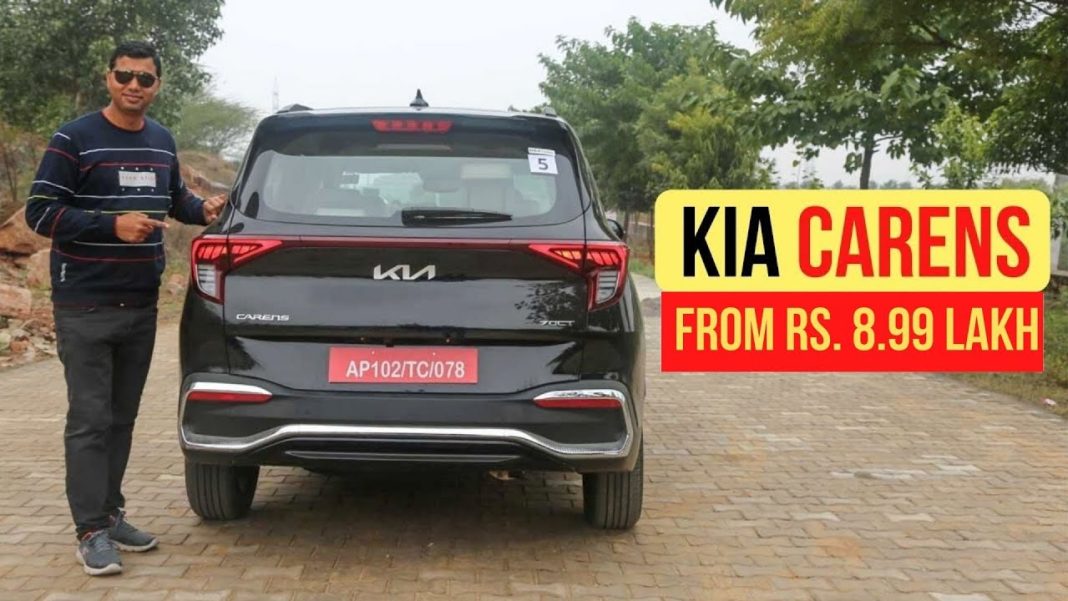 Kia India is all set to introduce the Carens in the domestic market in February 2022 and its bookings are open across authorised dealerships present in the country. The Carens is advertised as a recreational vehicle by Kia instead of calling it an MPV. In reality, it has an exterior blending the design elements of an SUV and an MPV giving a rather unique stance.

The Kia Carens is the first model from the brand for India that follows Opposites United philosophy used globally. The front fascia comprises a split headlamp cluster with sharp-looking LED Daytime Running Lights on top and they flank a glossy black grille section and the LED headlamps in the middle look sportier too.

Elsewhere you could also find wide central air intake in the lower section of the bumper and the signature Tiger Nose motif can also be seen with the LED fog lamps neatly nested into its housings. The Carens can be had as a six- or a seven-seater and it has larger proportions than the Hyundai Alcazar and it even has a longer wheelbase compared to the Toyota Innova Crysta.

Other exterior highlights are wraparound LED tail lamps connected by a thin light strip, integrated spoiler, shark fin antenna, an aggressive rear bumper just as the front and an upright tailgate. The Kia Carens will compete against Maruti Suzuki XL6, Mahindra Marazzo, Hyundai Alcazar and some variants of the Toyota Innova Crysta.

It will kick start a feature-loaded midsize seven-seater family-based MPV space and we got to test the diesel automatic version of it in our media drive. It boasts good suspension setup for Indian road conditions as it is on the softer side and the steering feedback is just like other Hyundai and Kia cars as it is adopt to speed by weighing in.

It has disc brakes on all four wheels helping in reducing the stopping distance and the body roll is well contained on the front row. One of the key highlights of the Kia Carens is its practicality as it offers good space for a tall person in the third row that can be accessed through a one-touch tumble function but the legroom is not that sufficient but offers better headroom compared with XL6 & Ertiga.

The Kia Carens has all the bells and whistles to make a big impact in the family seven-seater space and it will be interesting to see how the rivalling manufacturers respond in the near future. To know more about it, check out our in-depth review video linked above!