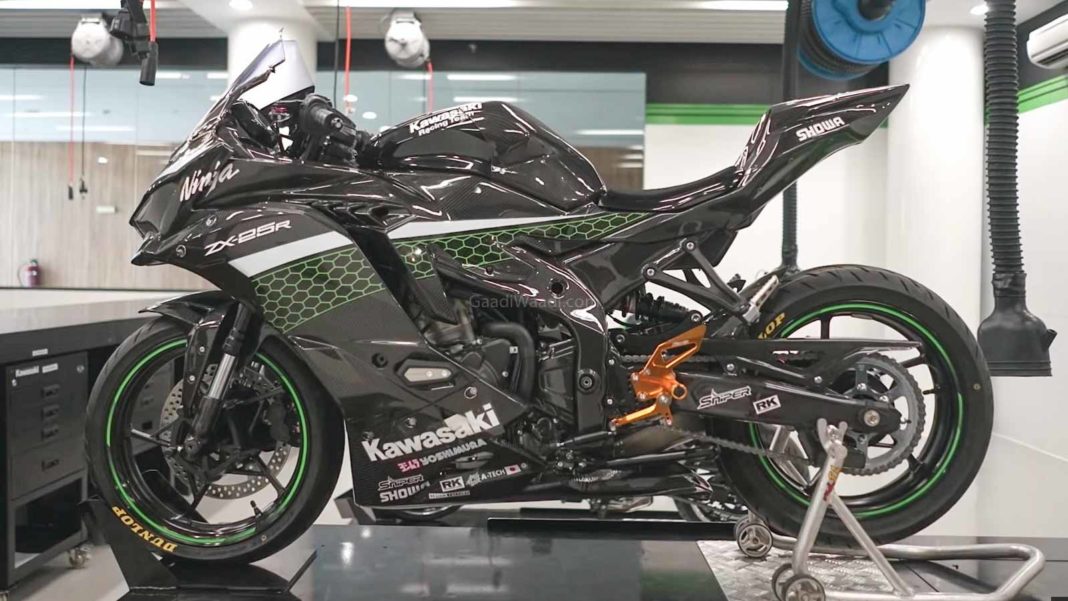 Kawasaki was set to launch the much-anticipated ZX-25R in the Indonesian market last month, but ended up postponing the event indefinitely. However, this hasn’t lowered the Japanese two-wheeler manufacturer’s morale. In a video uploaded on Kawasaki’s official Indonesian YouTube channel, a ZX-25R can be seen completely transformed into the race-spec version of the same bike, which was introduced previously.

Team Green had previously fitted the motorcycle with a Yoshimura exhaust along with some aftermarket parts from Sniper including clip-on handlebars, foldable front brake lever and lever protector, foldable clutch lever and lever protector, and racing rear sets. Now, they have taken the modification a step further, and as seen in the video, go on to replace the motorcycle’s stock parts with carbon fibre body panels sourced from A-Tech.

The video starts with the team replacing the rear seat cowl first, and then the headlight assembly. This modification kit is meant for track use only, and hence, there is no cut-out for the headlamps in the new carbon-fibre headlight assembly, just like the race-spec version. After that, the carbon-fibre front fairing, fuel tank, chain cover, and front fender are fitted on to the bike.

The technicians do not forget to add the honeycomb pattern graphics on the front fairing, as well as the ZX-25R stickers. Apart from these, decals of the brands whose parts are used in the actual ZX-25R race-spec version, are also added. The original track-only model of the motorcycle will be used in Kawasaki’s One-Make Racing Championship set to be held in 2021 in Japan, which will be open for both experienced riders, as well as beginners.

The Ninja ZX-25R draws power from a 249 cc in-line four-cylinder, liquid-cooled, DOHC, 16-valve engine. Kawasaki is yet to reveal the power figures, but we expect it to belt out about 45 PS of maximum power. The quarter-litre motorcycle will also come equipped with a quickshifter.