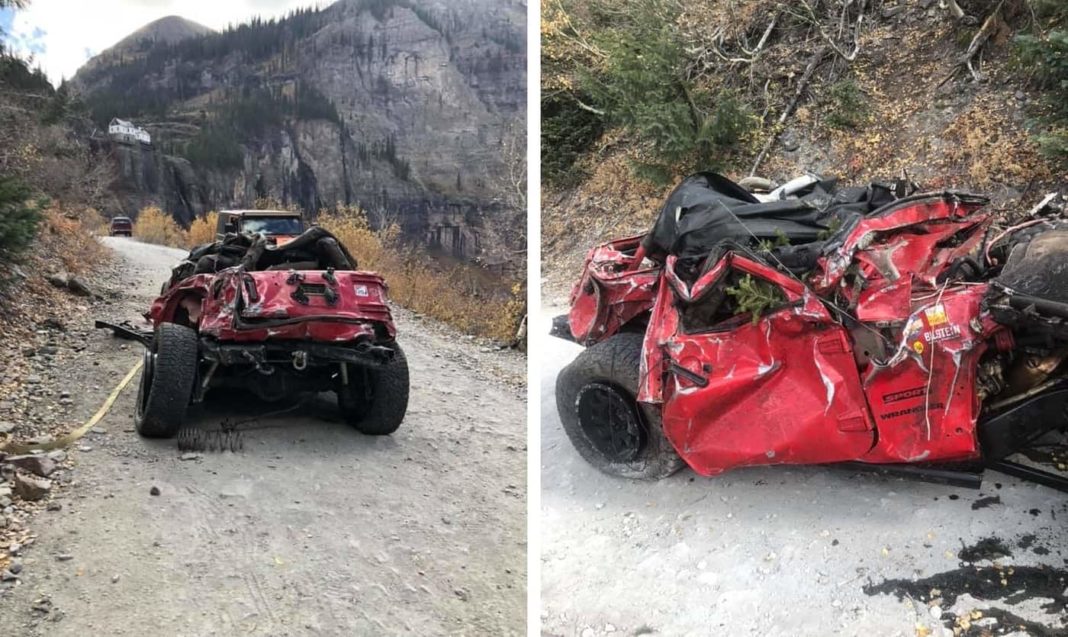 The incident took place in Telluride, Colorado, USA, and one of the occupants was severely injured due to the fall

Off-road driving is quite a popular hobby among automobile enthusiasts, especially nowadays. Modern SUVs are not only powerful, but also offer a lot of tech and equipment, which make it easier to push them off the road. However, a lot of people love to enjoy old-school machines instead, as those offer better control and driving pleasure.

That said, this particular hobby isn’t always sunshine and rainbows. People often forget that the wild is unpredictable, and extremely dangerous as well. There are plenty of things that can go wrong, and if it’s not your lucky day, they will. Here, we have a video that captured a part of one such off-roading accident, uploaded by a YouTube channel named “Wrangler Y2K”.

The accident took place on 10th October, at Black Bear Pass in Telluride, Colorado (USA). According to local news reports, the driver of the vehicle, a 22-year-old male, had parked the car at a pass and went out to help a fellow driver with a tight turn. Then, the parking brake of his own vehicle failed, and it managed to pop out of gear.

As the vehicle started rolling towards the edge, the driver ran back and tried to get in, but was thrown off as the vehicle fell off the edge. Other occupants in the vehicle included a 23-year old female passenger and two puppies. The Jeep tumbled down six switchbacks before coming to a halt. The passenger was flung out of the car, which caused her serious injuries. Both the dogs have been reported safe and sound.

Authorities rushed in soon after receiving the report of the incident. San Miguel County Sheriff also shared the details on social media, along with photographs of the vehicle. The Jeep has been crushed beyond recognition, which only shows us how brutal the fall must have been.

Both the people involved in the accident were flown to Telluride Medical Center for treatment, but due to the severity of the woman’s injury, she was later sent to another hospital. According to reports, if she hadn’t been thrown out of the vehicle, she could have even lost her life. We urge our readers to exercise extreme caution when participating in any off-road adventure, to avoid such dangerous mishaps.