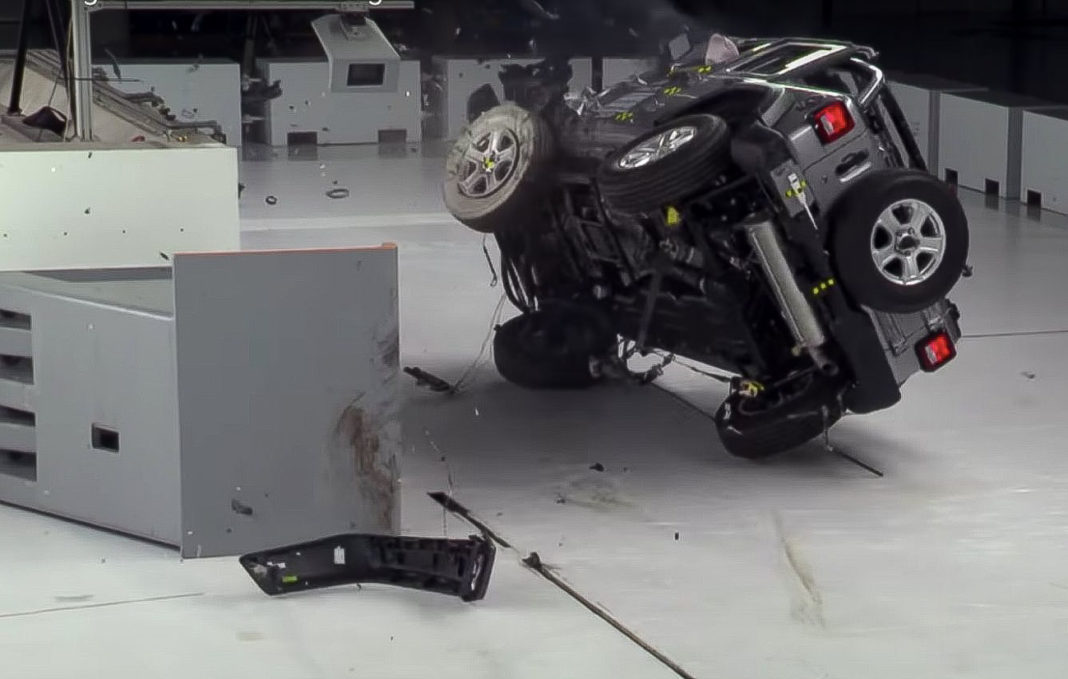 The latest Jeep Wrangler was put through a list of strenuous tasks by IIHS (Insurance Institute for Highway Safety) to find out how good it is in crash protection. The four-door SUV was redesigned less than a couple of years ago and it was evaluated in three driver-side small overlap crash tests separately to be confirmed with the results.

One by FCA as part of verification test program and the other two at the IIHS’ vehicle research centre. Shockingly, the driver-side small overlap front crash test saw the Wrangler tip over on its passenger side following a collision with the barrier. It rolled onto the passenger side after hitting the test barrier on both tests conducted by IIHS.

In the test results submitted by FCA, the 2020 Jeep Wrangler did not tip over. It must be noted that IIHS conducts tests of some vehicles in the verification program to maintain the integrity of the evaluation standards and the subsequent results, and the Wrangler was one of the chosen model for audit tests. Fiat Chrysler queried whether the outcome was related to the method used by IIHS engineers in attaching the vehicle to the crash propulsion system.

Thus, IIHS agreed to perform another test using a method approved by FCA and it led to the Wrangler tipping over to its side. It was chosen for driver-side small overlap rating as the previous model gained good ratings in this particular test and under the verification program, the safety organisation assigns rating based on documents and video submitted by the manufacturer.

The highly popular SUV was also rated poorly for halogen headlamps found in base variants and LED projector headlamps. It can be bought with an optional vehicle-to-vehicle front crash prevention system that enables appreciable rating. In the tests conducted by IIHS without the aforementioned system, the Wrangler avoided collisions at 12 mph and 25 mph.

Overall, the Wrangler was awarded with good ratings in head restraint, moderate overlap front, side and roof testings. By the normal metrics, the Wrangler performed well in the drive-side small overlap test as the driver space was maintained with controlled dummy movement. The partial rollover, on the other hand, presented an added injury risk and the vehicle tipping over is definitely unacceptable for a frontal crash test leading to the overall decrease in its ratings.

Since Wrangler has removable roof and doors, and it also lacks side curtain airbags, even partial rollovers could prove to be dangerous.