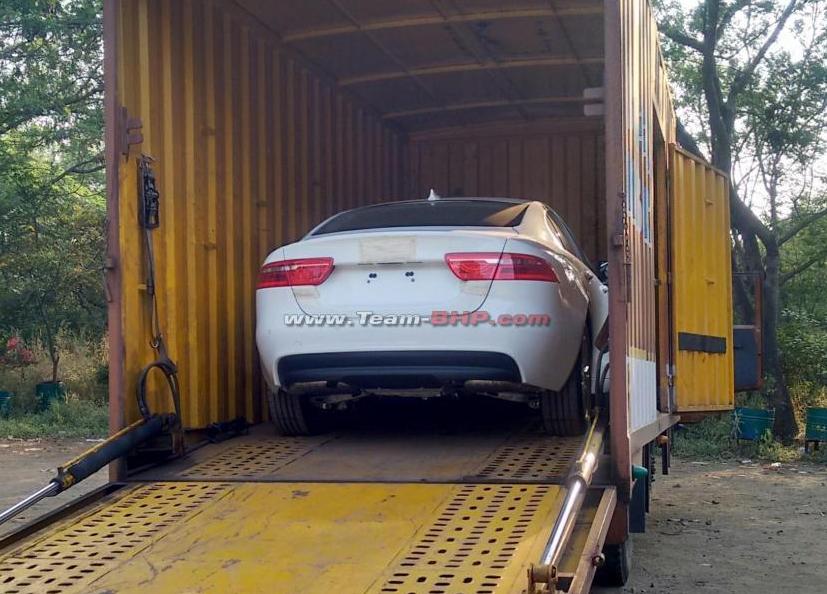 Jaguar XE spotted testing in India for the first time, scheduled to debut at the 2016 Delhi Auto Expo

Jaguar XE is a compact premium sedan that rivals against the likes of Audi A4, BMW 3-series and Mercedes C-class. The first image of XE testing in India has been spotted without camouflage near the ARAI testing facility in Pune, Maharashtra. Rumoured to be launched as a direct import initially, the spotted entry-level luxury sedan was imported as a CKD for R&D purposes.

With the XE, Jaguar will be stepping into an unknown territory as  the British luxury auto maker looks composed to take on the German trio in what has been a car of over two years in the making.

The outcome has been an affordable Jag that will give its competitors a serious run for their money with a grown up posture and putting more emphasis on driving. The XE is an unmistakable Jaguar product with styling cues borrowed from the XF such as broad shoulder lines and huge grille across the Leaping Cat emblem. Also inspired by F-Type’s design to confirm its sporty appeal, it delivers a very low drag co-efficient of 0.26 Cd.

The clean and sharp styling is endearing, however, as the quality of the interiors will have to push boundaries in order to get anywhere closer to the rivalling Mercedes C-class. Jaguar could ditch the flip-open air-con vents for a conventional arrangement as seen on the XEs sold in Europe.

Jaguar calls it the brand’s most advanced sport sedan ever produced and it comes with a new iConnect infotainment system that plays music on-the-go and guides your destination whilst you can do a lot more plugging in the smart phone with the improved tech system.

The XE will come packed with new technologies like the brand new electronically assisted power steering and more significantly the modular aluminium-intensive monocoque body shell that enhances strength and torsion rigidity to bode well with the company’s sporty claims.

In Europe, the Jaguar XE heralds with three engine options: a 2.0-litre petrol, a 2.0-litre diesel and a 3.0-litre supercharged V6 seen on the F-Type. The all-new, four-cylinder, 2.0-litre diesel unit from the Ingenium family comprises two states of tune: one producing 160bhp and 380Nm of torque and the other 178bhp and 430Nm of torque. The 3.0-litre supercharged V6 petrol engine delivering 335hp remains doubtful as Indian buyers tend to slope towards the diesel variants. All engines are mated to an eight-speed automatic transmission with active and passive suspension techs. The active suspension learns the road surface and adjusts the dampers to make for a better ride. These are exciting times for JLR as it’s embarking on one of the most ambitious and potentially rewarding product line expansions in the industry.

The XE launches in the US and other markets very soon whilst the new XF commences deliveries in the next quarter. Followed by the new F-PACE SUV, in 2017, is the hugely promising L560 midsize Range Rover built on the F-PACE structure as a BMW X3 and Audi Q5 rival.