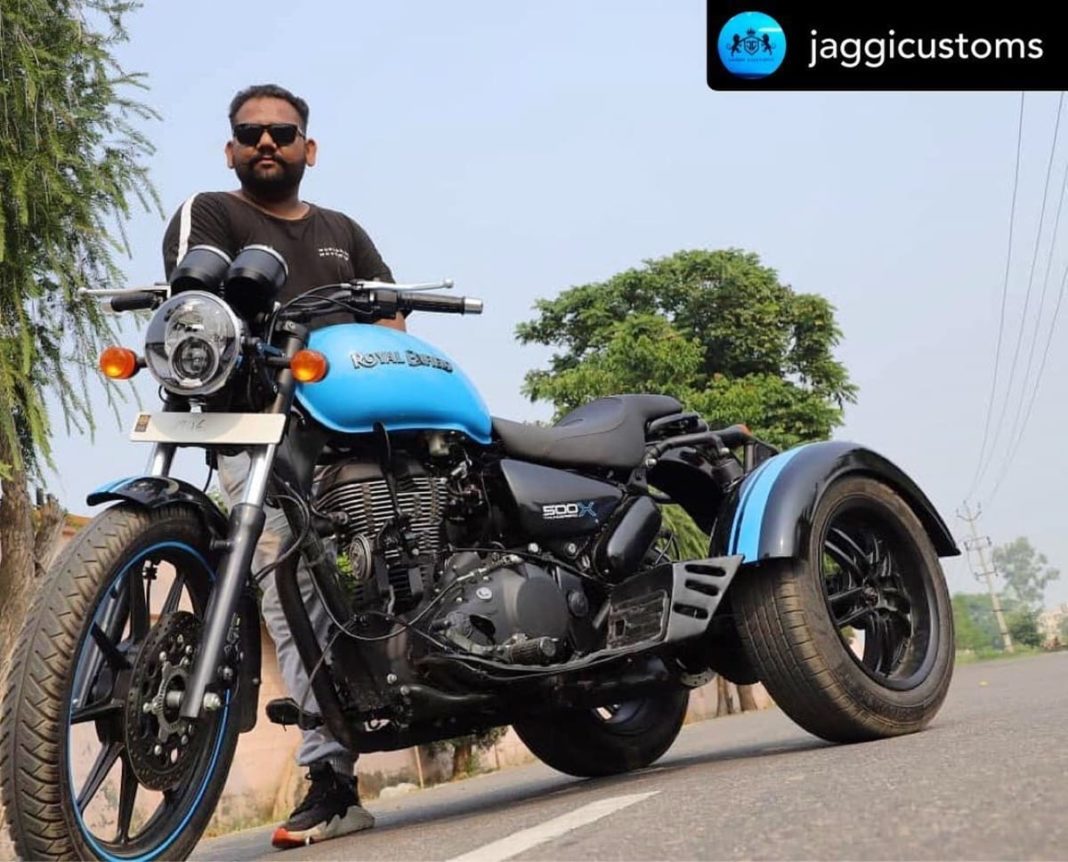 Check out this modified Royal Enfield Thunderbird, which has been built into a Trike, complete with a reverse driving mode!

Motorcycle customisations are quite popular in India, especially on Royal Enfield bikes. Most of these, however, consist of aesthetic changes, wherein a motorcycle is built into beautiful pieces of art. We’ve also seen a few practical mods, but none of those are as extensive as the one we have here!

This particular Royal Enfield Thunderbird X has been modified into a tricycle by Jaggi Customs, a garage/workshop based in Jalandhar, Punjab. The rear section of the motorcycle is where the major changes lie. The rear wheel has been removed, and an axle has been added in its place, with two new wheels. The suspension setup, however, remains the same, although the swingarms have been changed. A long footrest has also been added for additional comfort.

The transmission on the motorcycle has been tinkered with, and two gears have been added over the existing gearbox. These are not additional gears, rather these are only for directional changes; one is used to change the direction of the output torque, thus turning all the gears into reverse gears, while the other is for maintaining forward direction. We aren’t sure if a differential has been added to split power between the rear wheels, or if this is a live-axle setup.

The video, uploaded by a YouTube channel called MotoMahal, shows us exactly how this motorised tricycle works. We see the motorcycle drive in reverse in circles, thus demonstrating the ease of manoeuvrability. It was also pointed out in the video that such modifications are extremely practical for older as well as differently-abled riders.

A patent has also been registered for this, which is a great thing. Usually, such modifications are classified as illegal by the Government of India, as the structural integrity of the vehicle cannot be guaranteed after the modifications. If approved by the RTO, this technology can help bring mobility to a large (eligible) portion of the differently-abled population. A big step towards Atma-nirbharta, won’t you agree?

As for the older riders, there are plenty of them all over India. We often see senior citizens riding around in their scooter and motorcycles in the busy Indian traffic. A trike would be much safer for them, as they wouldn’t be required to balance it at low speeds or when they roll to a halt.