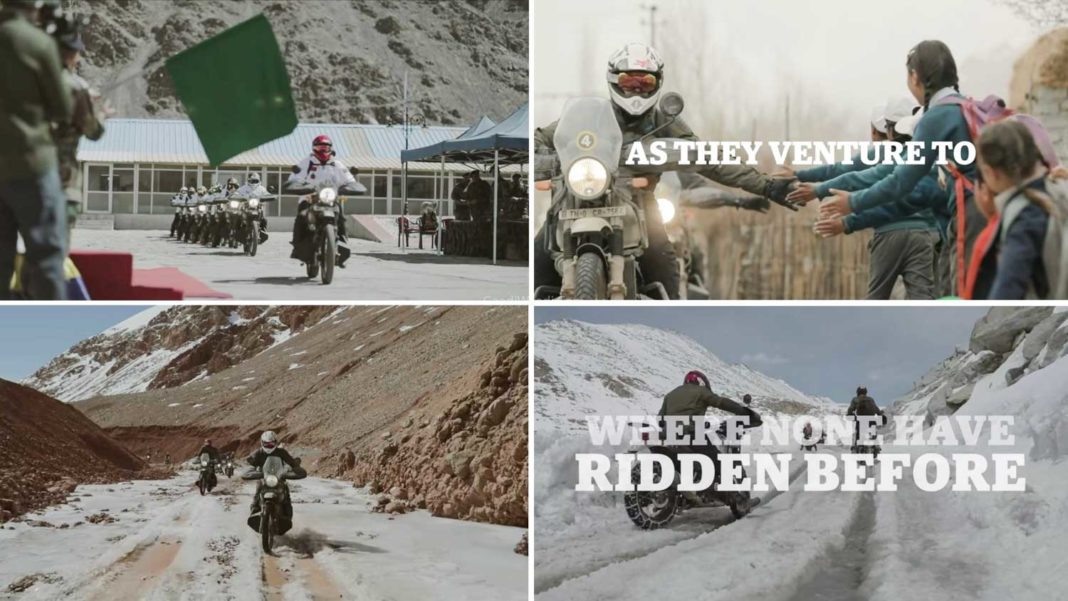 A group of Indian Army personnel took Royal Enfield Himalayan motorcycles for a ride to the mighty Karakoram Pass in Northern Ladakh – a feat that no one has ever accomplished before. No one has ever ridden a bike to the Karakoram Pass, which is located at 18,176 ft, making it the highest pass on the ancient caravan route between Leh in Ladakh and Yarkand in Tarim Basin, China.

Included in the team were 11 members, which consisted of 6 Indian Army officers (4 men, and 2 women personnel), 4 Royal Enfield enthusiasts and one crew member of the Himalayan Motorsports Association. After traversing the frozen perimeters of Tangtse, Siachen, Chongtash and Daulat Beg Oldi, the men and women of the Indian Armed Forces, along with the rest of the crew reached the Karakoram Pass on April 16, 2019, after 10 days of riding over dirt, slush, snow and what not.

The team had to experience some of the worst terrains in the entire country, as well as harsh weather conditions, but also captured breathtaking views along the journey. In order to pay heed to the brave Indian Army personnel that achieved this feat, Royal Enfield has uploaded a video on its official YouTube channel praising them for serving in these unforgiving conditions to protect the citizens and the land of the country.

Talking about the motorcycle used in this ride, the Royal Enfield Himalayan is one of the most-affordable adventure motorcycles in the Indian market. The purpose-built motorcycle draws power from a 411 cc, 4 stroke, SOHC, air-cooled, fuel injected, single-cylinder motor that produces 24.3 hp power & 32 Nm torque, and comes mated to a 5-speed gearbox.

The bike comes equipped with a 300 mm disc up front, and a 240 mm disc at the back, coupled with dual-channel ABS. The features on offer include a switchable rear-wheel ABS, a hazard-lamp switch, and a semi-digital instrument cluster with a white-backlight. The Himalayan competes against the likes of Hero XPulse 200, as well as the KTM 390 Adventure in the market.