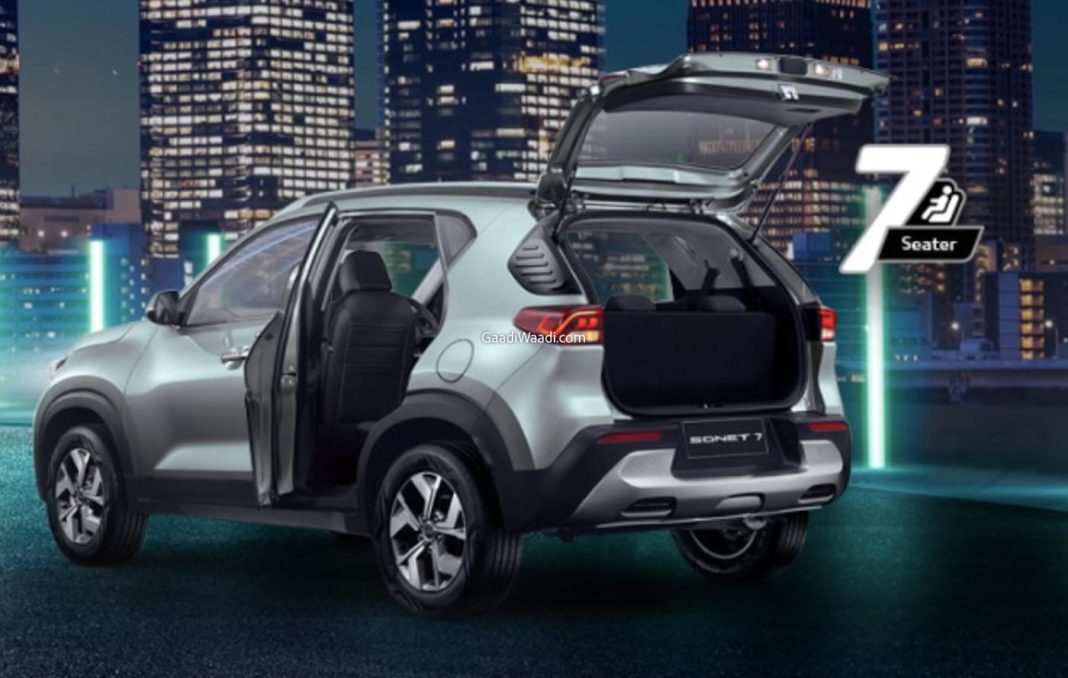 Kia’s Indonesia division unveiled the three-row version of the Sonet only a few days back and it opens up a new compact SUV based seven-seater segment. The Sonet seven-seater measures 4,120 mm in length, 1,790 mm in width and 1,642 mm in height while having a wheelbase length of 2,500 mm and ground clearance of 211 mm. It is manufactured at the brand’s production base in Anantapur, Andhra Pradesh and shipped to Indonesia.

Compared to the India-spec Sonet, it is 125 mm longer while having the same width and height as well as the wheelbase length. Since the regular five-seater Sonet for the Indonesian market is longer, it would have been relatively easier to cram in the third row than the sub-four-metre compatriot retailed in India. The spare tyre has been moved underneath the rear bumper while no panoramic roof is offered.

It also comes with a steering wheel with mounted controls, cruise control, auto AC, rear air conditioning vents, ventilated front seats for added comfort and so on. The South Korean auto major has given an additional roof-mounted blower for easy spread especially to the third-row occupants. As for safety, six airbags, ESC, TPMS, parking sensors, reversing camera, etc are available.

The seven-seater Kia Sonet continues to use the same 1.5-litre four-cylinder petrol engine. It produces 115 PS maximum power and 144 Nm of peak torque and is paired with a six-speed manual transmission as standard or a CVT automatic transmission.

In India, the Sonet is also retailed with a 1.5-litre four-pot diesel motor pumping out a maximum power output of 115 PS and 250 Nm of peak torque. Whether the Kia Sonet seven-seater will launch in India or not is yet unknown but do not rule out the possibilities. A premium MPV from Kia appears to be in the works!