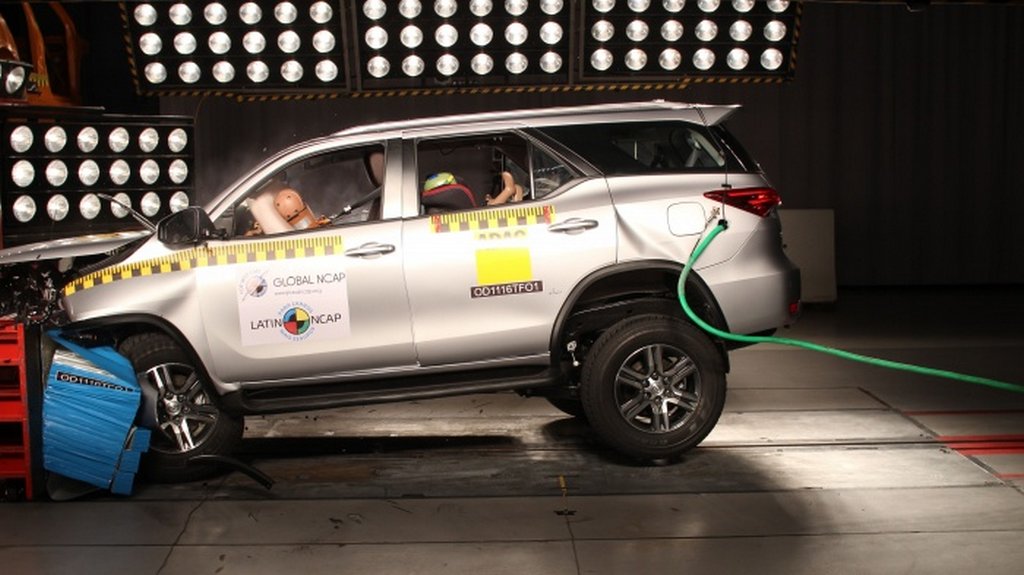 In December 2015, the Hilux pickup truck the all-new Toyota Fortuner is based on was put under stringent crash tests and it came out on top. We revealed earlier in February that the second generation model has been patented in India but with the expected Auto Expo 2016 debut didn’t occur, it’s yet to be revealed for domestic market.

However, as some of the South East Asian countries received the new-gen SUV already, we expect it to arrive here in the opening months of 2017. Built on a new ladder frame chassis, the Fortuner has been put under audit test by Latin NCAP recently. Latin NCAP (New Car Assessment Programme) was founded in 2010 to determine the active and passive safety of new cars sold in Latin America and the Caribbean. Toyota took up the challenge from the ace safety council as the Fortuner or Hilux SW4 it’s called as in some Latin American countries, went through rigorous mandatory tests to see if it can score as high a rating as the pickup sibling which received five stars.

The Argentine-spec Hilux work horse passed every test with impressive rating and admirably scored full marks in both adult and child occupant protection. The Latin NCAP certified the Fortuner to be consistent as well as it offered near identical ratings as its bigger brother. The Hilux was equipped with dual front airbags and driver knee airbag during the time of its test and the tested Fortuner should have had similar safety levels. The all-new Fortuner better the Hilux in some bio-mechanical prospects as well according to Latin NCAP. The seven-seater SUV will go up against Ford Endeavour, Chevrolet Trailblazer, Mitsubishi Pajero Sport,Hyundai Santa Fe and the likes in the premium segment when launched.

The base variant of the existing Fortuner is priced at Rs. 24.17 lakh and the top-of-the-line AT model is sold for Rs. 27.02 lakh (all ex-showroom prices, Delhi).