Volkswagen revealed the new generation Jetta at the beginning of 2018 and is gearing up to bring a new avatar of its popular Passat amidst preparing its global assault with a string of SUVs across different price brackets. Ahead of the new Passat’s debut, VW has begun its teaser campaign by previewing it with design sketches.

Compared to the existing model, the 2019 Volkswagen Passat will have an aggressive front fascia judging by the teaser sketches. Sitting prominently on the face up front is the sportier grille, which is complemented by slimmer headlamp cluster with integrated LED Daytime Running Lights and chrome embellishment dominating the upper section.

The new generation Volkswagen Passat will have bigger dimensions than the outgoing model as well liberating more space for occupants as well as accommodating additional boot volume. Despite the increased proportions, the forthcoming model is constructed on the same PQ46 platform and thus wider area of improvements will not be made. It won’t come with electrified powertrain and an all-wheel-drive configuration. 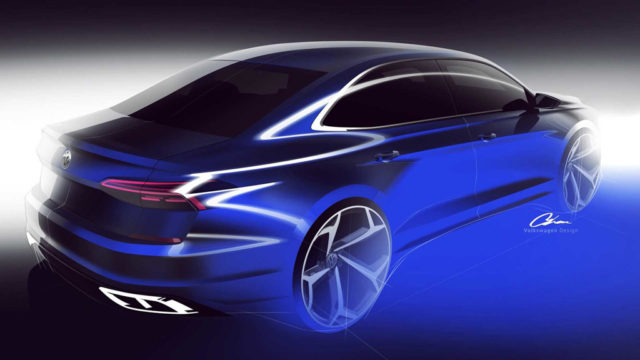 Due to the stricter emission standards prevailing across the globe, the new Passat will have to skip its V6 engine by opting towards more efficient motors with low carbon footprint. Since the premium sedan segment is taking a step backwards in sales, Volkswagen elected not to spend huge money on developing the new Passat on an advanced architecture like the flexible MQB.

It is worth noting that the Euro-spec Passat is based on MQB as opposed to the upcoming US-bound model. It will be sold in four variants with a range of driver assistive and safety features such as adaptive cruise control, lane assist and so on. We can expect the new Passat to enter India in the near future with updated 2.0-litre engine.