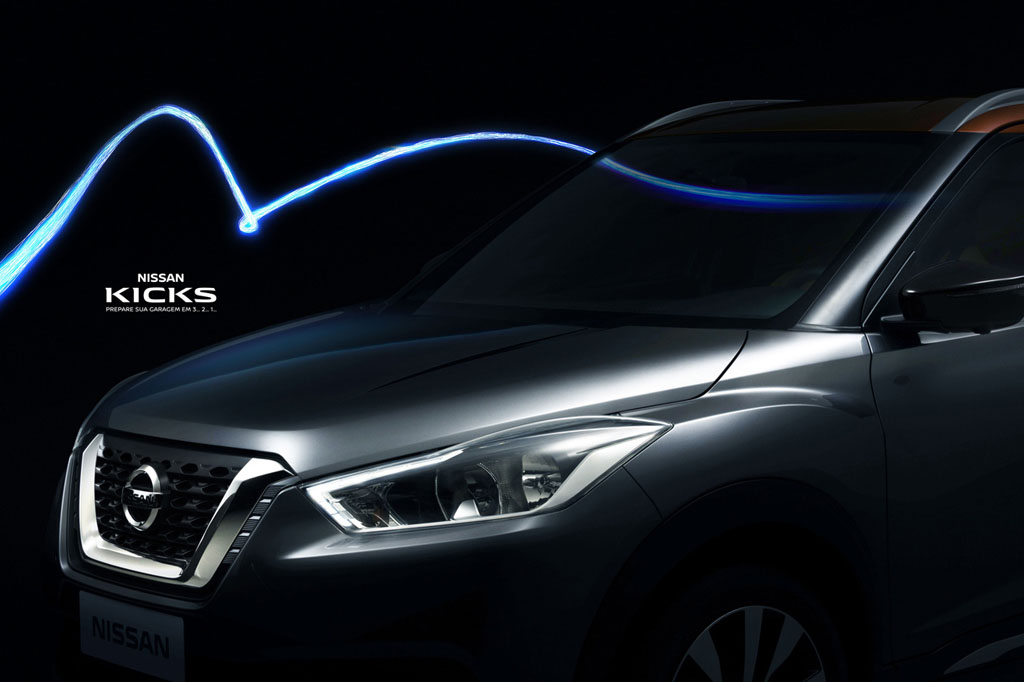 Japanese automaker Nissan teased the front fascia of the upcoming Kicks compact SUV, which is based on the Nissan Kicks concept showcased earlier at 2014 Sao Paulo Motor Show. The compact SUV will make its global debut on 3rd May during the 2016 Rio Olympics next month. A few days ago Nissan teased the rear fascia of the upcoming car, and now the front fascia has been teased. It would reach Indian shores sometime around 2017.

The front profile of the car suggests it retains several characteristics from the concept it is based on. The sharp headlamps appear like laid back above the front fender, and they sport LED daytime running lights. The V shaped chrome bar embellished front grille is something represents the modern day Nissan design language. The front grille looks edgy and aggressive. Although the lower bumper is not revealed in the latest teaser image, but expect it to take the design cues from the concept. In that case it is expected to get chrome garnished slated air intake at the lower fascia.

The hood gets sharp creases running toward the nose section. The protruding front fender in the teaser image suggests the Nissan Kicks will don a muscular appearance, which was visible in the concept model. Expect the car to come with sporty alloy wheels, side turning indicator integrated ORVMs, side body cladding, nicely sloping roofline, a different coloured roof, sporty roof rails, as the teaser image suggests. Nissan claimed, this car was designed keeping the Brazilian lifestyle and culture in mind.

Although there is no interior detail available of the Nissan Kicks, but expect the car to sport upmarket features and comfortable spacious cabin on offer for the occupants. Nissan Kicks might come powered by a 1.6 litre flex fuel engine which will be fuel efficient considering the emerging markets like India, Brazil. Once launched here, it might take on the Ford EcoSport, which is a very popular compact SUV in Indian market.