Isuzu has revealed the 2020 D-Max range of pick-up trucks in Thailand, with a launch slated for 19th October

The D-Max range of pick-up trucks by Isuzu is available in three different body styles, which include the entry-level regular cab with two doors; an extended version of the same; and a four-door crew cab version. The entire range has been updated, including the top-end V-Cross variant sold in India.

The current generation model has been on sale since 2011 globally, and a new model was long due. The 2020 Isuzu D-Max V-cross looks more premium, as well as more rugged at the same time when compared to the previous model.

On the outside, the large all-black front grille sporting the Isuzu logo grabs all the attention. It also gets new projector headlamps with integrated LED DRLs. The fog lamps are vertically stacked and divided into two parts, one of which could also be the turn indicator. The skid plate along with the black wheel arch cladding complement the overall rugged and meaty design. It also gets black treatment for the door handles, roof rails and ORVMs.

The black treatment is carried over to the rear bumper. It gets new square-shaped vertical LED tail lamps, which seem to be popping out, but do a good job at making the rear look more proportionate than before.

The premium treatment continues inside the cabin, and it is indeed surprising to see such plush interiors on a pick-up truck but it is expected to make a big difference. The interior has become more premium than the outgoing model.

The centre stage is taken by the 9-inch touchscreen infotainment system integrated with Android Auto/Apple CarPlay. The D-Max V-Cross also gets an all-new steering wheel with mounted controls, along with a new 4.2-inch digital MID. The black and brown interior on the Thai-spec car looks neat and upmarket. 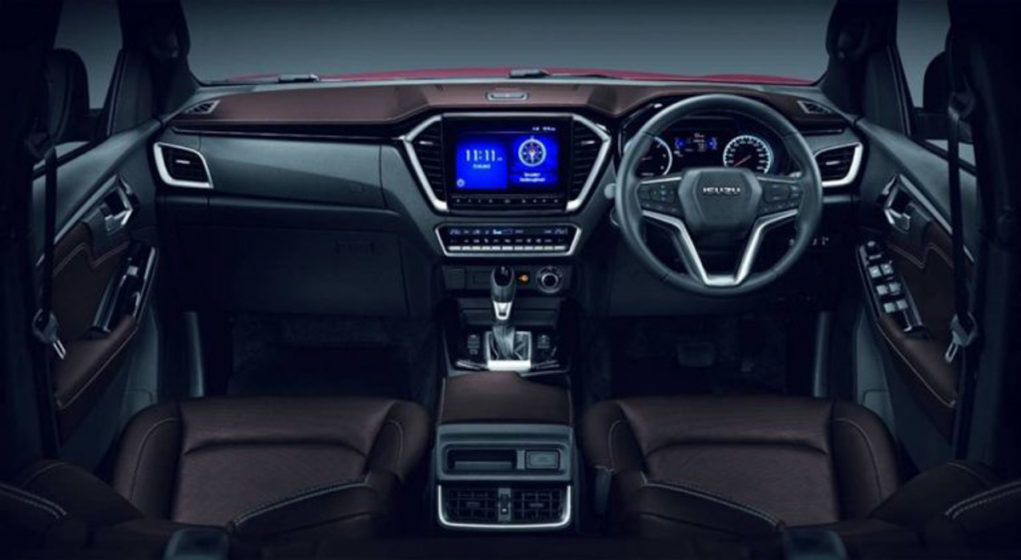 Expect the new D-Max V-Cross to hit the Indian markets sometime late next year as it received a facelift only recently. Meanwhile, the Thailand launch is scheduled for October 19.