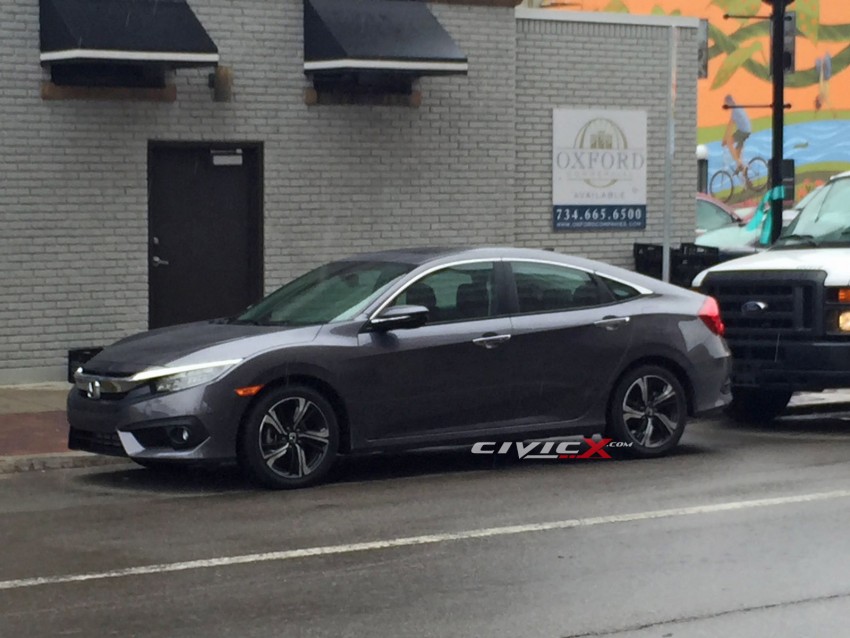 Honda Civic hasn’t been the most confidential Honda till date for sure. After sketches, prototypes and spyshots coming in almost weekly. Today is the time when we saw it undisguised. It has been spotted somewhere in the USA standing outside completely undisguised on the roads just before it is all set to be unveiled at September 16 2015. The 2016 Honda Civic’s design is the first thing that is visible and it isn’t anything like the facelift of the old car. All new design from scratch means nothing is similar at all. Front is very low while the mid section is lifted up to aid practicality inside the cabin and the rear is futuristic as a spaceship. It reminds of the Mazda saloons that are available in the US to quite an extent. It on the other hand looks very substantial and chunky and the stance reminds us of the German saloons. 2016 Honda Civic is will also get the Type R treatment as well which means a bigger petrol engine with saloon body to take your wife and kids to work and school in a rapid fashion. 2016 Honda Civic will get turbo petrol and diesel engines that are mated to 6-speed gearbox. In the US Honda says turbo is so efficient that Hybrid and CNG are of no use in front of it. 2016 Honda Civic India specs are going to be similar but we think the diesel engine will be bigger in size with more power and 1.5 turbo is also very likely to come to India. Launch happens in mid 2017. Till that time Honda will have updated Elantra, Octavia and many other cars to compete with.