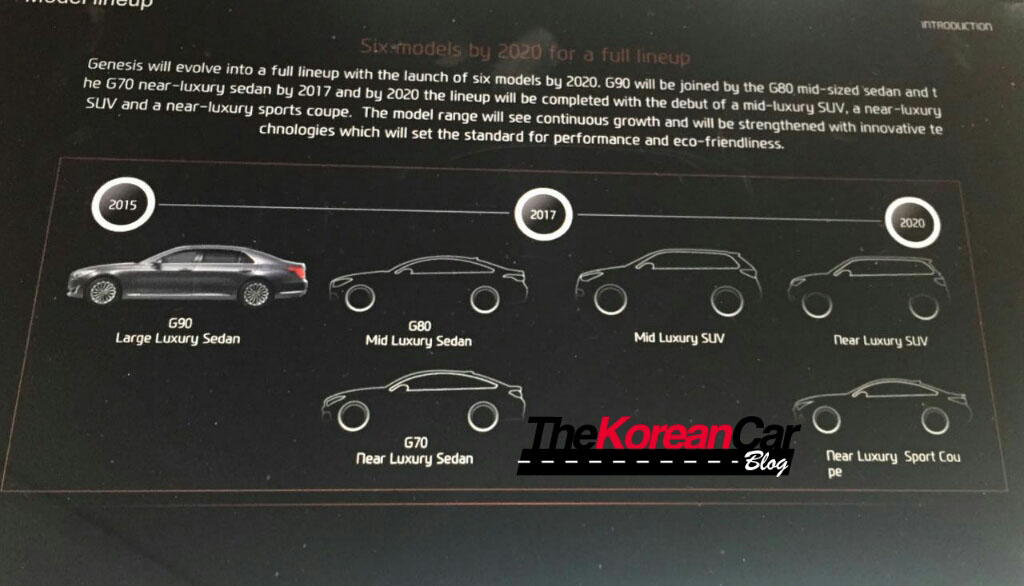 Hyundai has already stirred the world automotive market by showcasing its premium luxury brand Genesis’s G90 and G80 models publicly. The brand Genesis is planning to introduce a total of 6 cars globally to the world automotive market by the end of 2020. These 6 cars include the first offering from brand G90, which is a large luxury sedan, then the mid size luxury sedan G80, which was showcased at the 2016 Detroit Motor Show. The other models will include G70 near luxury sedan, a near luxury sports coupe, a mid luxury SUV and a near luxury SUVs. The indication is very clear. With the Genesis brand Hyundai is gearing up to take on the German luxury automakers like Audi, BMW and Mercedes Benz.

The Korean Car Blog has revealed images, which show the six car lineup, which Genesis plan to launch by 2020. The image suggests the launch timeline as well. According to the leaked image, the first car of the line up under the Genesis nameplate is the G90, which was unveiled in Korea last year. The car was showcased at the 2016 New Delhi Auto Expo as well, earlier this year in February.

The car is expected to hit the markets this year only. Up next will be the G70 and G80 luxury sedans, both of which would hit the markets around the globe by 2017. In between 2017 to 2020 Genesis will launch two luxury SUVs and a luxury sports coupe as well.

Although Genesis’s intention to launch these cars by 2020 is clear, but the details are yet to be revealed, which platform will these cars based on. It can be assumed that the Genesis models will come sharing platforms between them. The powertrains are also expected to be shared, which will eventually reduce the cost.