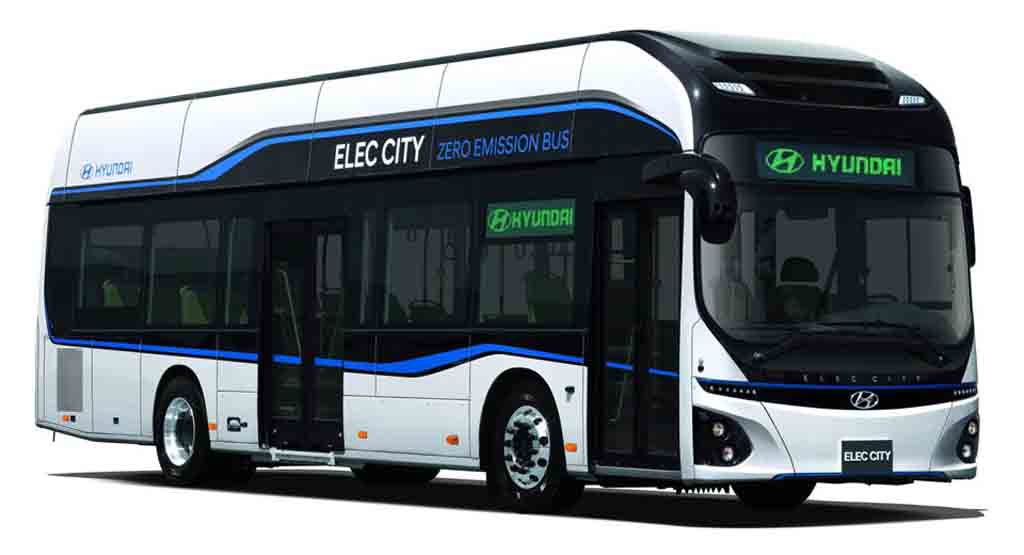 Hyundai aims to start production of the bus from 2018; capable to run 290 km on single charge

Hyundai has unveiled its all-electric bus Elec-City in South Korea that is expected to entre commercial production from 2018 and this bus is capable of running 290 km on a single charge. This is not the first time, the South Korean auto major has produced an Elec-City bus concept, but what’s new is that the company is keen to start production this time.

The auto manufacturer claims that the Elec-City electric bus will reduce the fuel cost to one-third of a regular bus powered by conventional fuel. With this, the bus can save $241,000 in 10 years compared to a conventional fuel powered bus. Upon arrival, the Hyundai Elec-City bus will compete with rivals like K-9 manufactured by China’s KYD, eBus-12 etc.

Speaking about the Hyundai Elec-City’s all-electric powertrain, the bus gets energy a 256 kWh lithium polymer battery pack combined with an electric motor that makes the vehicle capable of running 290 kilometer on a single charge. The battery pack takes 67 minutes to get fully charged. So far, the all-new Hyundai Elec-City electric bus could play a major role in the company’s EV dream.

Hyundai claims that it has used automatic temperature control system to prevent the battery from overcharging. Also, this technology ensures the battery temperature remains in control during various weather conditions. The technology enhances the battery’s efficiency and protects it from getting erupted in flame which could be a possible safety hazard.

Hyundai is known among the frontrunners when it comes to introducing environment friendly greener mobility options. The company has been working on hybrid and plug-in hybrid models for quite long alongside the electric powertrains. It aims to introduce the electric powertrain technology to a large number of its cars and for the commercial vehicles, the Korean brand plans to enhance the fuel efficiency by 30% across all the models by 2020.