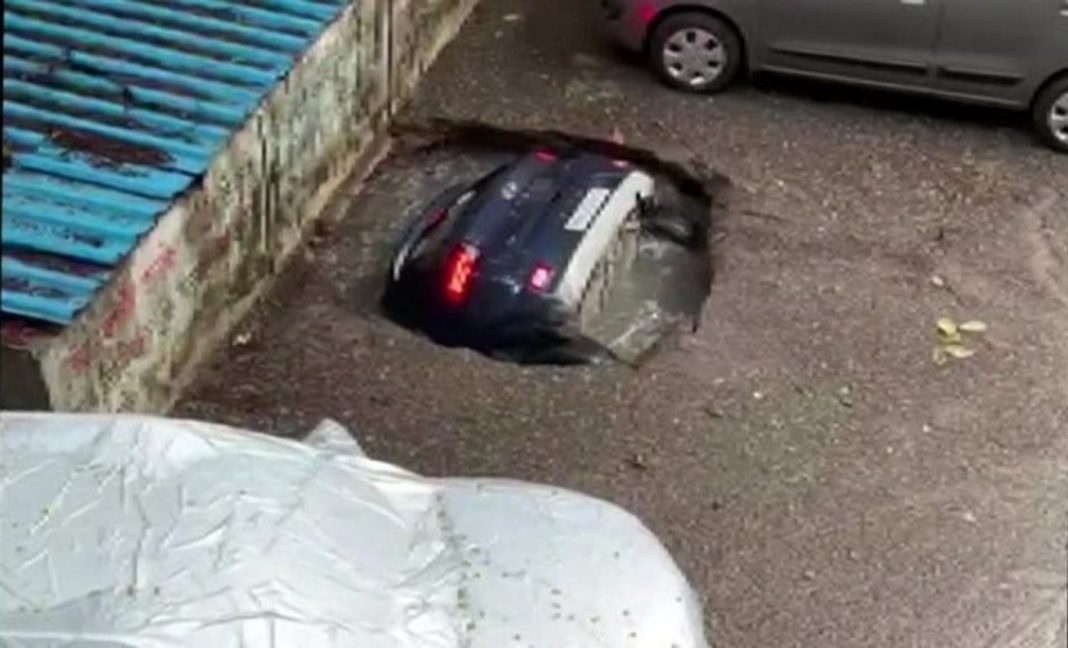 In a recent incident in Ghatkopar, Mumbai, a car was swallowed whole inside a parking lot that was reportedly built on a well

Mumbai, along with other coastal areas of Maharashtra, has been experiencing heavy rainfall these days. Many streets have been waterlogged due to the downpour, and this has led to several cars being water-damaged. Recently, a video went viral on social media, in which we can see ground caving in and completely swallowing a car.

The incident took place in Mumbai’s Ghatkopar, inside a private society. In the video, we can see that the vehicle – a Hyundai Venue – was sitting in a parking lot when the ground cracked open and the vehicle starting sinking into the water underneath. The front of the vehicle dived in first, and in a matter of seconds, the entire car disappeared beneath the water.

According to local reports, the parking lot was built on a well in the premises of a Ghatkopar residential society, near Ramnivas building. Half of the well was covered with concrete, while the other half was kept open. The building was reportedly constructed over 80 years ago, and the concrete portion of the well around 40 years ago. It seems like a section of the concrete portion weakened over the years, and the recent rainfalls accelerated the decay.

#MumbaiRains
Car swallowed completely by a sinkhole in residential complex in Mumbai.. Later discovered that it was a covered well under a parking lot! pic.twitter.com/nvLct0QqfU

The owner of the affected car, Dr Kiran Doshi, reported that the incident took place at around 8:30 AM on the weekend. The person who washes the cars of the residents of Ramnivas building, Mahadev Shigwan, noticed the concrete beneath the car caving in, and immediately raised an alarm. The owner then rushed to the spot, and saw the car sinking in front of his eyes.

Thankfully, no person was reported hurt in this accident; only the vehicle was damaged. The sinkhole was reportedly 30 feet deep, and submersible pumps were used to suck the water out. A crane was called to lift the vehicle out, and with the help of Traffic Police and BMC officials, the car was removed from the well by around 9 PM

Interestingly, no other vehicle was damaged in the incident. In the video, we can see that all the vehicles near the affected car remain safely parked. India Meteorological Department has predicted heavy rainfalls in the city of Mumbai, and Brihanmumbai Municipal Corporation has issued a high alert for all agencies.