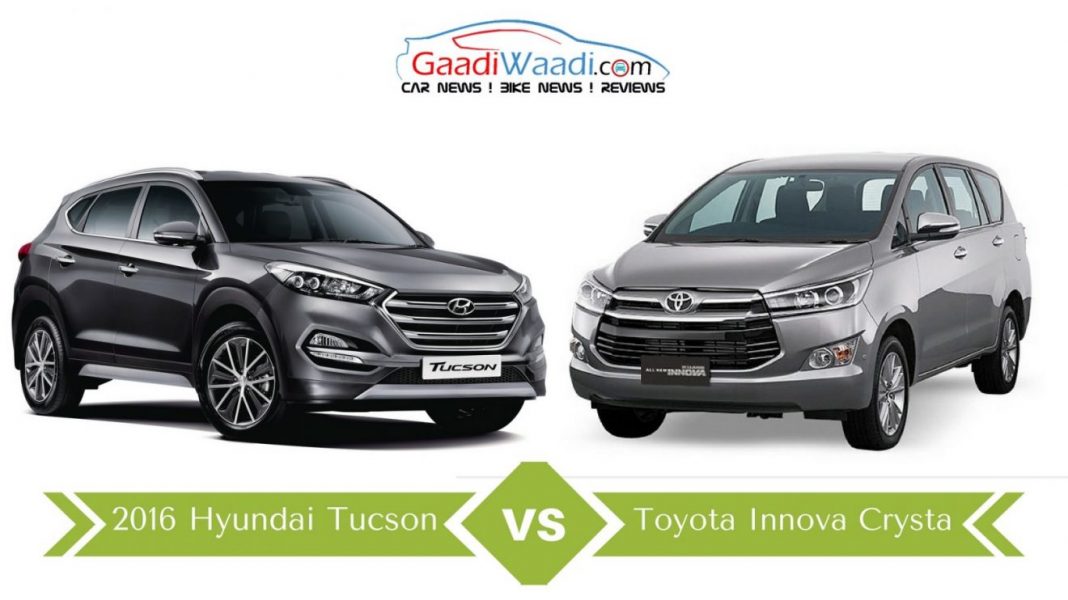 Hyundai Tucson vs Toyota Innova Crysta makes for a strong rivalry despite based on different segments; closest competitors price-wise

Hyundai Tucson is a stylish SUV the South Korean automaker has just launched in India. Earlier in 2005 Hyundai brought the first generation Tucson to the country but axed it due to poor sales. Now the SUV comes with a refreshed and more premium look than before. The car was displayed at 2016 New Delhi Auto Expo, where it garnered huge appreciation.

Indian customers are known for their love of SUVs, and almost every automaker has presence in the segment. Hyundai being one of the major players in the auto market, has eye-catching SUVs like Santa Fe and Creta. Now with introduction of Tucson, the line-up gets much stronger, but this car receives tough competition from several models. It takes on rivals like Honda CR-V, Mahindra XUV500, Tata Hexa and the likes.

Toyota Innova has been the most popular MPV in domestic market for quite long time. Despite being a MPV, the Toyota Innova gives several models in the UV segment run for their money and Hyundai Tucson will surely face the challenge as well. Within short span since its launch, the muscular looking MPV has seen success in Indian market. The new stylish design, premium appeal inside the cabin and powerful engines have made this car best choice for many customers over others.

Here we are taking comparative look at the Hyundai Tucson and Toyota Innova Crysta based on spec-sheet: Toyota Innova Crysta on the other hand is based on Toyota New Global Architecture (TNGA) platform and it looks way much different than its predecessor. The new model looks very aggressive, stylish and premium over just being a people mover. It gets a large front grille with dual chrome finished horizontal slats, wide sleek air intake with dual-beam projector headlamps and integrated LED daytime running lights. The front bumper looks huge and sports wide fog lamps, which altogether give this car a very attractive look indeed.

Also read: All New 2016 Toyota Innova Crysta – All You Need to Know In terms of design both Hyundai Tucson and Toyota Innova Crysta come with looks which grab attention easily. Both the cars appear muscular and stylish with their respective designs. While Tucson looks shorter and compact than Innova Crysta, the Fluidic Sculpture 2.0 design language makes Hyundai Tucson much more appealing looking than the Innova Crysta. Dimensionally speaking, the Hyundai Tucson measures 4,475mm in length, 1,850mm in width, 1,655mm in height and it also has a wheelbase of 2,670mm. The SUV gets a bootspace of 513-litres and it comes with a fuel tank capacity of 62-litres.

Hyundai Tucson boasts an upmarket interior and it sports a three-spoke multi-function steering wheel, dual analog dials and a digital MID consisting instrument cluster. The dual-tone dashboard comes with a simple layout and gets an 8-inch touchscreen infotainment system with Apple CarPlay and Android Auto on the centre console. Apart from that the car comes with horizontal air vents, ventilated and heated seats, dual-zone climate control etc.

The steering wheel, centre console and AC vents come with silver accents around them. Also the car gets plenty of space inside cabin offering the occupants a comfortable experience. It comes with a power assisted tailgate which can be operated with a simple foot action. Moreover the cabin is equipped with keyless entry and go, electric parking brake etc. In terms of interior styling, the Toyota Innova Crysta comes with a premium appearance and it looks way much appealing than Tucson. It sports a multifunction steering wheel with control buttons mounted on it, unique looking instrument cluster comprising both dual analog dials and digital MID. Apart from that a large touchscreen infotainment system, wooden trims enhance the car’s appeal further. The steering wheel and centre console gets silver accents.

Toyota Innova has always been known for offering the occupants plenty of space inside cabin and the new Crysta is no different. It gets wooden trims at different places, captain seats with armrests for middle row passengers, cooled glove-box at dashboard, premium quality seat and upholstery material, power window, automatic climate control etc.

So far, in comparison between the all-new Hyundai Tucson and the Toyota Innova Crysta, they come quite attractive inside their respective cabins. The Crysta looks certainly more spacious, thanks to the longer wheelbase than Tucson. Apart from that it offers more premium look with the stylish design elements making it the clear winner in this respect. Hyundai Tucson is available in both petrol and diesel engine options. The petrol model takes power from a 2.0-litre four-cylinder engine paired with 6-speed manual transmission and a 6-speed automatic transmission on offer as well. The engine is capable to churn out 153 bhp of peak power at 6,200 rpm and 192 Nm of peak torque at 4,000 rpm. The manual model returns 13.03 kmpl and the automatic model delivers 12.95 kmpl of fuel economy.

Hyundai Tucson diesel variant on the other hand, draws power from a 2.0-litre CRDi diesel engine, which is well capable of kicking out 182 bhp of peak power at 4,000 rpm and 400 Nm of peak torque between 1,750 rpm and 2,750 rpm. Transmission duty is done by a 6-speed manual and a 6-speed automatic gearbox. The manual variant offers 18.42 kmpl of fuel economy, while the automatic variant returns 16.38 kmpl. Toyota Innova Crysta, on the other hand, is available in both petrol and diesel engine options. The petrol engine is a 2.7-litre VVT-i unit which kicks out 164 bhp of peak power at 5,200 rpm and 245 Nm of peak torque at 4,000 rpm. For transmission duty, the car gets a 5-speed manual and a 6-speed automatic gearbox, while the fuel economy delivered by the car is around 9 kmpl. The Toyota Innova Crysta on the other hand gets seven airbags in the top-end model. Apart from that, the car also gets ABS with EBD, door ajar warning, rear parking sensors, Hill Start Assist, Vehicle Stability Control etc. Therefore in terms of safety, both the cars come well-equipped with several impressive features. While the Hyundai Tucson sits in highly competitive SUV segment in the Indian market, the Toyota Innova Crysta leads the MPV segment. Despite being positioned in a completely different segment, the Innova Crysta gives pretty much tough competition to several SUVs present in the domestic market and the Tucson is not going to be any different.

The Innova Crysta comes with a butch styling, which looks more muscular than Tucson. Also the interior features and space are much more impressive than the Korean SUV. Apart from that, the lower pricing, long-standing popularity, multiple engine options and availability of manual and automatic transmissions surely enhance the Innova Crysta’s appeal over Tucson. Therefore we can see the all-new SUV getting really tough challenge from Innova Crysta.