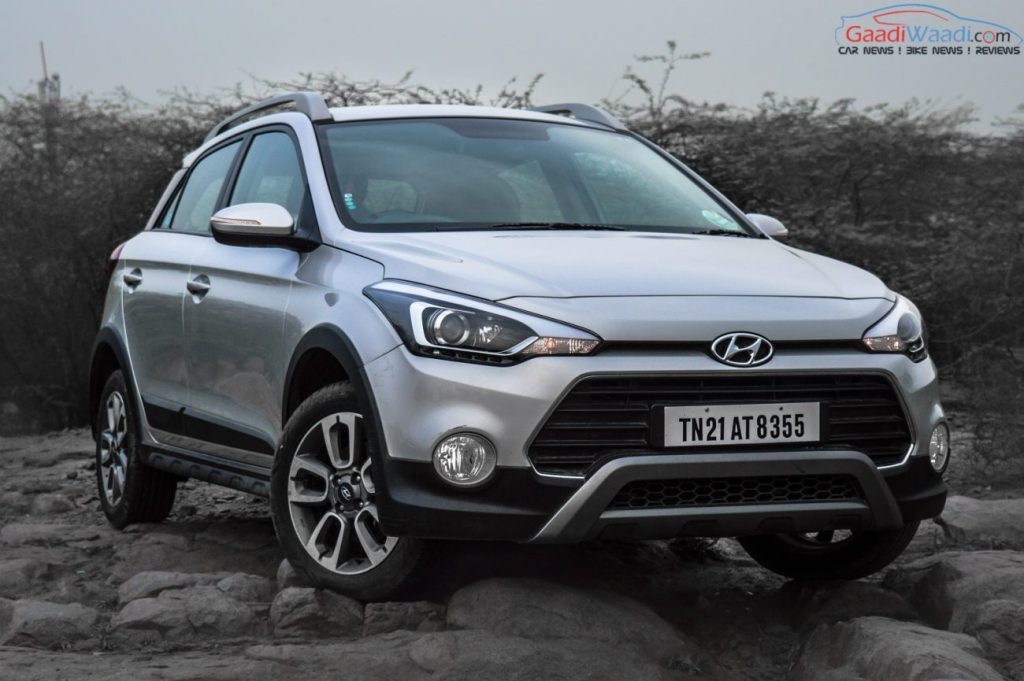 When we have the crossovers attempted from all the other potential brands, Hyundai, the Korean car manufacturer, also gave a try with the i20 Active. It competes against the likes of Maruti Suzuki S-Cross, Volkswagen Cross Polo, Toyota Etios Cross and Fiat Avventura in the crossover segment that has boomed of late in the Indian market. As the Elite i20 became a familiar and popular product since its launch, Hyundai decided to bridge the gap between the premium hatchback and other upmarket models through a crossover.

Based on the Elite i20 in every possible way, the crossover carried huge appeal and lived up to the expectations quite well. Consequently, it became the best-selling crossover in the mass market shattering all of its competitors. We were curious to get our hands on the i20 Active crossover and following our test drive here’s a comprehensive review of the highly adaptable model:

Hyundai I20 Active Price in India :

The S and SX are the only variants made available for the Hyundai i20 Active with six trim levels. It is being sold for the following prices (ex-showroom, Delhi):

On the contrary, the Hyundai i20 Active crossover has butch looks compared to the premium Elite i20 hatchback as the latter has European-ish styling with sporty character lines and a low-slung profile. When they stand side-by-side, the Active appears to have more of an upright stance as the added off-roading accessories like skid plates and roof rails make the crossover boast an SUV posture.

Body Cladding with roof rails gives a perfect CUV looks to i20 Active. There are no changes found on the Active technically, however, there has been improvements made on the hatchback, which will never or can be shared at a later stage on the Elite.

The Korean manufacturer has done a handy job in differentiating both the models despite them being based on the Fluidic Sculputre 2.0 design philosophy adopted worldwide. The important features found in the Hyundai i20 Active are an aggressive front grille with a two-tone bumper, multi-feature head lamps with projector like the one on the European version i20, glossy black finish pillar, roof rails and tailgate spoiler. 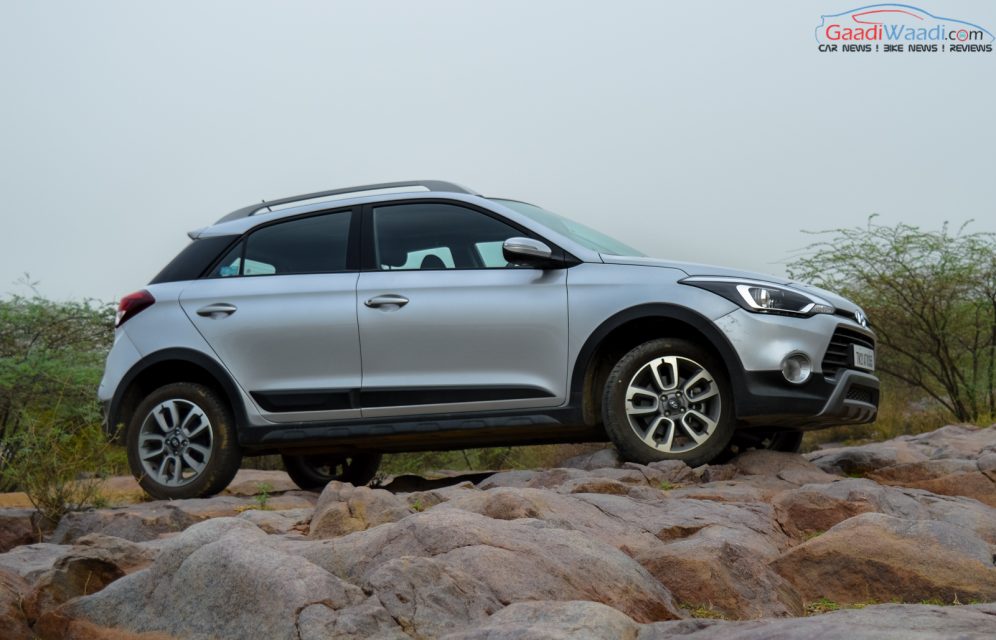 On the side, the most prominent is the metal colored large-sized fuel lid, chrome door handles and the side moldings cladding providing an aggressive appearance. The Hyundai i20 Active crossover measures 10 mm longer at 3,995 mm, 26 mm wider at 1,760 mm, 50 mm taller at 1,555 mm with 20 mm more ground clearance at 190 mm when compared to its hatchback sibling.

Hyundai Active i20 comes with best in-class cabin features & look-n-feel. The interior features are almost the same as the Elite, which differentiates with the space inside – obvious since the car is bigger from the outside. The increased height and wheelbase have allowed designers to create more room on the i20 Active as the thighroom and headroom were upped at the front and rear.

However, the leg room lacks enough space. The boot storing capacity for an average family is very decent too. It also features the smart pedal. While driving simultaneous with the operation of brake and accelerator pedal, the smart pedal overrides the accelerator pedal and applies brake only, a smart feature, which keeps your legs at bay. The Active also comes with aluminium coated pedals.

Hyundai offer multi colour options for the interiors which are unlike from any other brand making the Active unique. There is an option of Aqua Blue interior or Black interior with Tangerine Orange inserts. The centre console leans towards the driver and the leather-wrapped sporty steering wheel enhances the ease of handling as it can be held well. As the Elite i20, the Active also has the benchmark build quality. 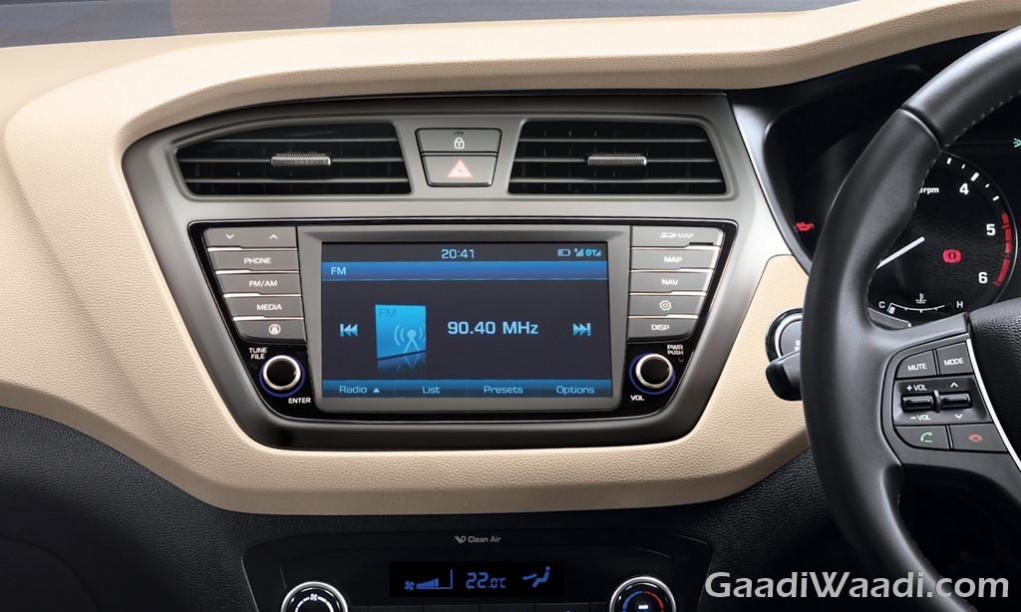 There’s the Audio Visual Navigation (AVN) system and to improve the safety quotient, Hyundai provides dual airbags as standard across all variants starting with the Era trim to the Asta (o). You will also gain ABS with EBD and a Smart pedal system for extra money.

Also present are Anti pinch power windows which automatically rolls down at sense of obstacle, Impact sensing door lock which gets automatically unlocked the doors when impacted to allow the occupants to have exit safely.

The Active i20 is powered by two engine blocks under the hood, the 1.2 litre petrol and the 1.4 litre diesel engine which is same as the Elite. However, the response from the engine is better than of the Elite.

The 1.2L Kappa petrol engine with Dual VTVT delivers 83 PS at 6,000 rpm while peak torque at 4,000 rpm. While the 1.4-liter CRDi engine produces 89 hp and 220 Nm of torque. Hyundai claims that acceleration times have improved by 6 percent in the case of the petrol and 11 percent for the diesel.

The Hyundai i20 Active feels the best to drive amongst its class To add-on excitement the diesel engine is mated to the 6-speed transmission and the petrol with the regular 5-speed block. While we felt the braking isn’t that effective, Hyundai Active i20 offers Projector headlamps on top of the line variants to help you see roads clearly. The Active is ARAI-certified to return 17.19 kmpl for petrol and 21.19 kmpl for diesel. But on our 500 km plus ride, the Active petrol gave close to 13 kmpl.

The engines are refined and smooth and response to your commands on lower revs and speeds. When you pump the throttle, there’s some lag at the mid-range but the top-end is icing on cake as you will be put in a relaxing mood. However, when you further push, the additional kerb weight meant the crossover will be left facing its limits.

The crossover rides on front McPherson strut with coil spring and coupled torsion beam axle with coil spring rear suspension. These are the same units found in the Elite i20 premium hatchback but they have been tuned to offer a ride to match any driving conditions especially off-roading.

The sporty steering wheel grips well allowing the crossover to turn in neatly on the corners but as it weighs slightly heavier than the Elite i20 you would get some compromises while pushing it through corners. The chassis is well built that you don’t get excessive body roll but driving through rough patches of road will make the rear occupants feel uncomfortable on a long run.

With that said, it can tackle potholes with ease and the big bump sections can be manoeuvred easily courtesy of the increased ground clearance. The city driving is another plus on the i20 Active as you can work through traffic with light hands, much as its hatchback counterpart.

It’s important to note that Hyundai i20 Active is an unique crossover positioned strategically in the company’s model range. It offers all the sportiness and handling ability of the i20 Elite while doing things the hatchback cannot do. The interior space has been enlarged and suspension raised for decent off-roading are the highlights of this crossover – making it the most versatile product in Hyundai’s product line-up.

Against the competition, the Maruti Suzuki S-Cross gives it a good run for its money but then again the i20 Active is more practical with better riding quality and features list. The Volkswagen Polo Cross, Fiat Avventura and Toyota Etios Cross are other healthy rivals in the crossover department but the Active i20’s alluring design, well-crafted interiors and supple ride make it come out on top quite convincingly.

Cons:
The top-of-the-line variant will cost a hole in the pocket with over Rs. 10 lakh on-road for the beefed-up hatchback.