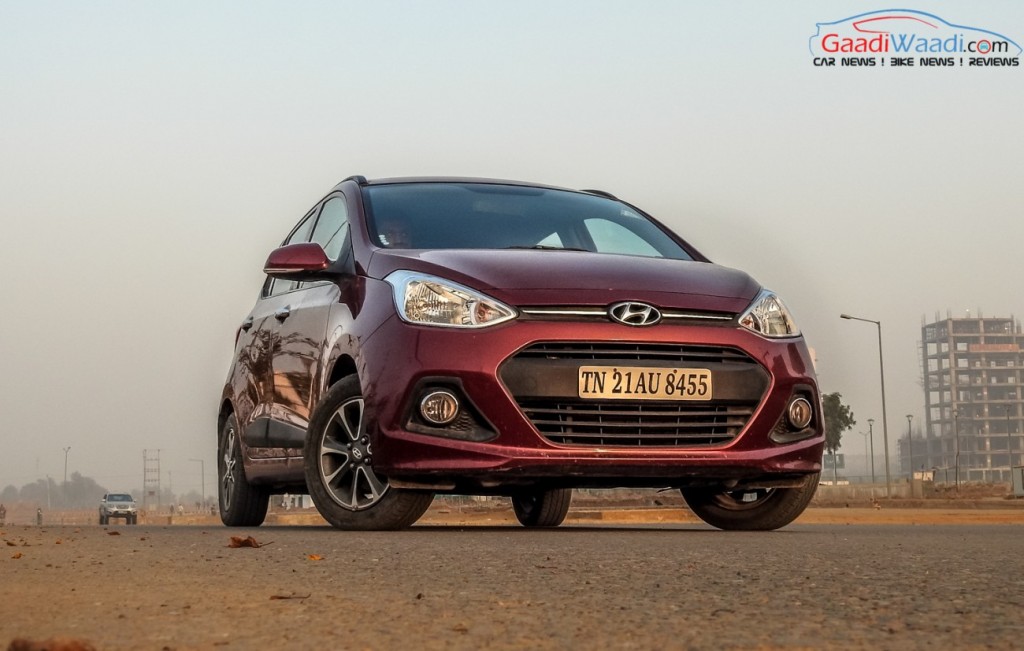 Hyundai Grand i10 is certainly a very popular hatchback in Indian market. Despite steep competition, the car has been still selling quite a few units regularly. Launched in September 2013, the car has seen new competitors like Tata Tiago, while the existing competitor like Ford Figo came out in an all new avatar last year. The Hyundai Grand i10 is due to get an update soon but before that we take a look at the bits and facts of the nimble hatchback.

Hyundai Grand i10 Price and Variants: The diesel variant of Grand i10 is powered by second generation 1.1 litre U2 CRDi DOHC turbocharged engine displacing 1120 cc. The transmission duty is done by a 5 speed manual transmission. The powertrain is capable to pump out 70 bhp of peak power at 4000 rpm and 160 Nm of peak torque at 1500 rpm. Grand i10 follows the sub-4 meter rule and this car measures at 3765 mm of length, 1660 mm of width, 1520 mm of height and 2425 mm of wheelbase. The ground clearance stands at 165 mm, which is generous for city drives and little bit of pothole filled roads as well. The 256 litres of boot space offers sufficient amount of space for luggage. The five door compact hatchback comes with 43 litres of fuel tank capacity. The car rides on McPherson Strut at the front, while the rear gets Torsion Beam Axle. Braking duty is done by discs at the front and drums at rear. Grand i10 sports swept back large headlamps, hexagonal front grille, while the sleek chrome strip with the Hyundai logo sitting just below the hood at the nose section simply adds on zing to the front fascia. The lower fascia adorns chrome tipped round shaped fog lamps with black surrounding.

Move to the side profile, the car features side turning indicator integrated wing mirrors, diamond cut alloy wheels and black cladding. The roof is sloping toward the rear and the rear profile dons a roof spoiler with stop lamp, wrap around short taillights and rear window wiper. Overall, the car looks stylish, although a bit dated in comparison with the competitors but when it was launched the Grand i10 stirred the segment and gave the competitors run for money. Although compare to its competitors the Grand i10 features a dated look inside the cabin, but the car delivers a sporty vibe, which looked upmarket when it was introduced. Up front the multifunction steering wheel, round analog dials and a small digital display at the instrument cluster.

The centre console houses a 2 DIN audio system. The interior sports dual tone theme. Despite the sloping roof the car sports sufficient space inside the cabin for rear occupants. The rear occupants get AC vents, which make the car a bit premium, while the start and stop push button, power adjusted wing mirrors, several storage compartments enhances the appeal. Prime rivals against Hyundai Grand i10 are Tata Tiago and Ford Figo. Ford has launched the Figo in an all new avatar, while the Tata Tiago is the latest entrant from the Tata Motors in the compact hatchback segment of Indian market.