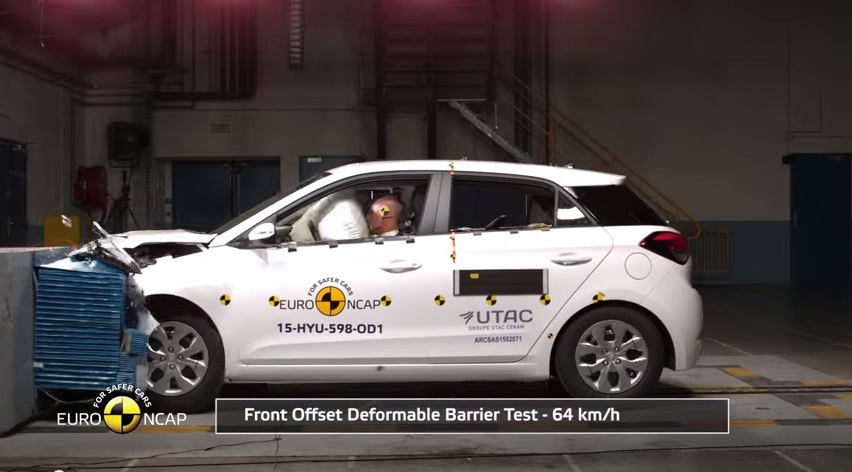 Hyundai Elite i20 recently sold one lakh cars in India and celebrated the milestone by calling it the super performer for the company. Sales numbers are truly great and so is the product. Today, Hyundai Elite i20 has finally been tested by EuroNcap and it gets 4 star rating with the usual 6 airbags in European spec version. The car tested this time was the 1.2 petrol engine. People will good memory will remember the 2009 model got a 5 star rating.

When we looked up, Euro NCAP says that the engine that time used was 1.4 diesel engine. As we all know the 1.4 diesel is significantly heavier than the petrol. For example the kerb weight for petrol is 1066 kgs while the diesel weighs a humongous 1222 kgs this time. The European petrol is already heavier 34 kgs thanks to added safety kit in passive and active material at 1100kg, so we expect the European diesel to weigh around 1256 kgs. The front collision impact percentage was 85% for the 2015 model but for the 2009 model the front impact was 88%. These figures try to prove our point. All this faffing about weight matters as front collision is utmost important for the car and if the engine makes any changes, we have to report them just like Euro NCAP mentions in limited specification sheet that it has. Even with 6 airbags and 1.2 petrol Elite i20 scores a healthy 4 stars which means it’s good. However, what about the Indian version which only comes with 2 airbags?

The Hyundai Elite i20 is global model which is made in India. We can’t expect the i20 to have sheet metal changes just for European market. So it’s safe to assume that it will score less with lesser airbags that we get here. It is just not airbags that count, India Elite i20 misses out on ESP, speed assistance and lane assistance which help it get the 4 star rating.

In the end, weight along with airbags matter and so does the human dummy which finally decide that despite airbag it has been hit or not. There have been cases where, despite airbags, the cars failed test because the dummy did not hit the airbag as the steering column was to tweak to take the impact and moved the dummy towards the A-Pillar

All in all the Hyundai Elite i20 should score more with diesel engine equipped car and along with the six airbags it could go ahead with 5 star rating that it had previously, as we think manufacturer like Hyundai can’t take a step back in safety. Meanwhile, It’s competition the Maruti Swift got 3 stars with dual airbags and Volkswagen Polo got 4 stars with dual airbags.

Despite whatever is the outcome, in India it rarely matters to the customer as he chooses the value quotient over safety and hence manufacturer provide less safety equipment. The day we demanded more, we would also start getting Euro spec cars at least when it comes to safety.