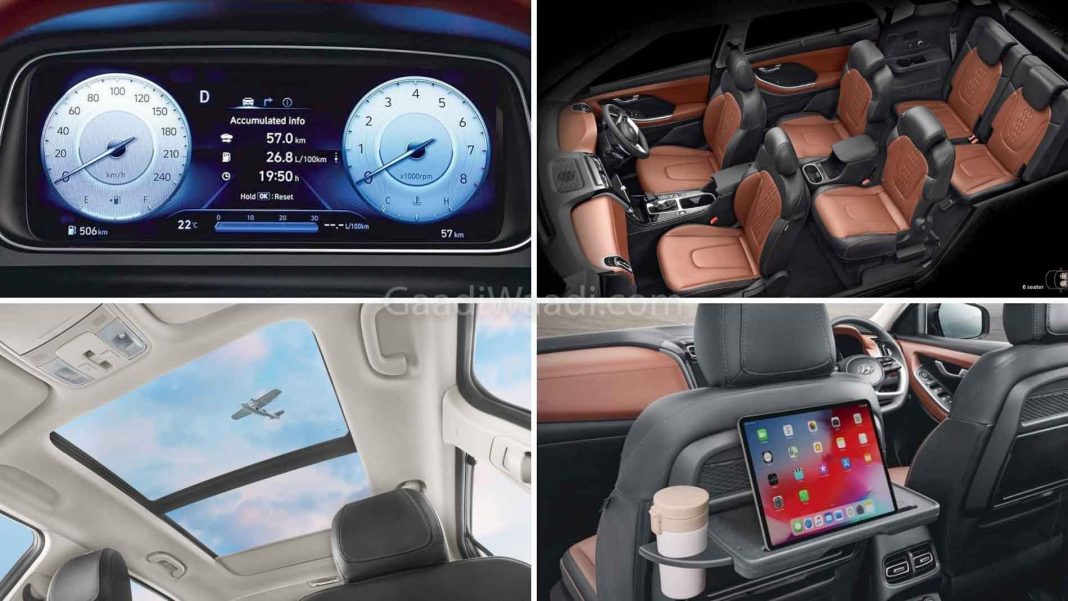 The upcoming Hyundai Alcazar has been completely unveiled now, and here, we have mentioned everything about it that warrants mentioning

Hyundai is set to launch the Alcazar in India later this month. Bookings for this three-row SUV have already commenced, for a token amount of Rs. 25,000. When it arrives, the Alcazar will compete against Tata Safari, MG Hector Plus, and Mahindra XUV500 in our market.

The South Korean manufacturer has now completely unveiled its upcoming 6/7-seater SUV, including both interior and exterior. As such, now we know a lot of details about it, including features on offer, specifications, etc. Here, we take a look at the 15 things that have now been revealed.

Hyundai is offering a 10.25-inch multi display digital instrument cluster on the Alcazar, a first for this segment. 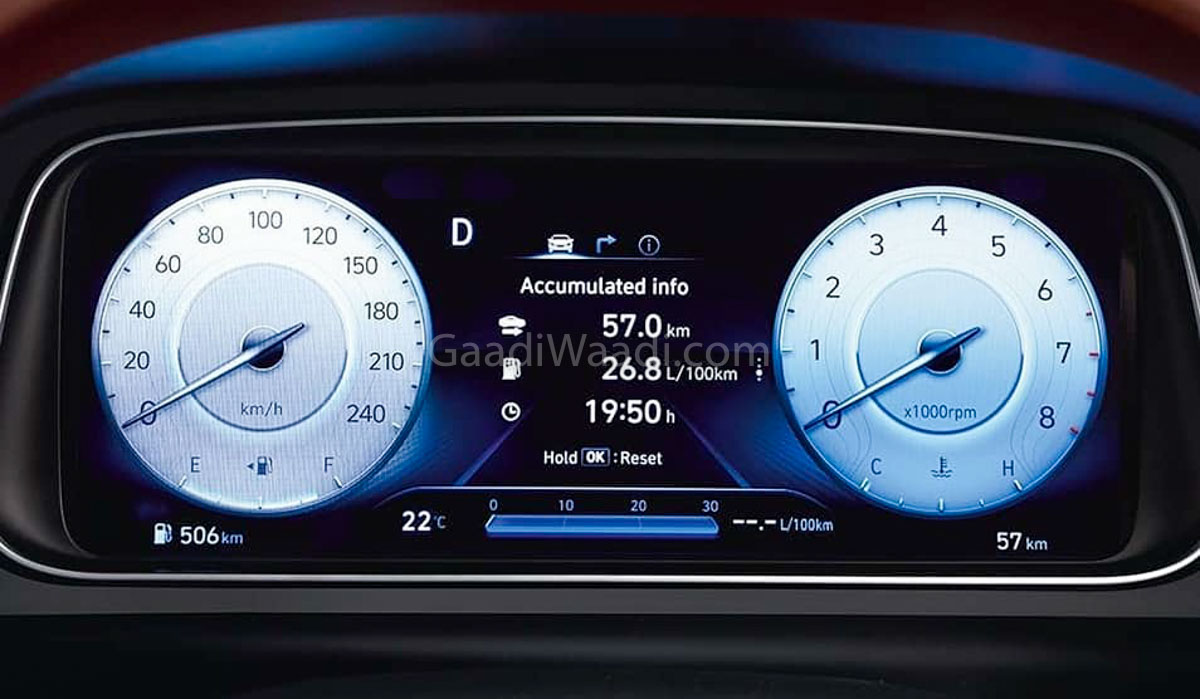 The Alcazar will be available in both 7-seat and 6-seat configuration. In the 7-seater version, the second row gets bench seats with a folding armrest in the middle. The 6-seater version gets captain chairs in the second row, with a floor console in between the seats. The vehicle also gets a one-touch-tip-and-tumble feature for the second row, which makes ingress-egress easy.

The centre console in the second row features a wireless smartphone charger, which is another segment-first feature. Said console also gets an integrated armrest and two cup holders. 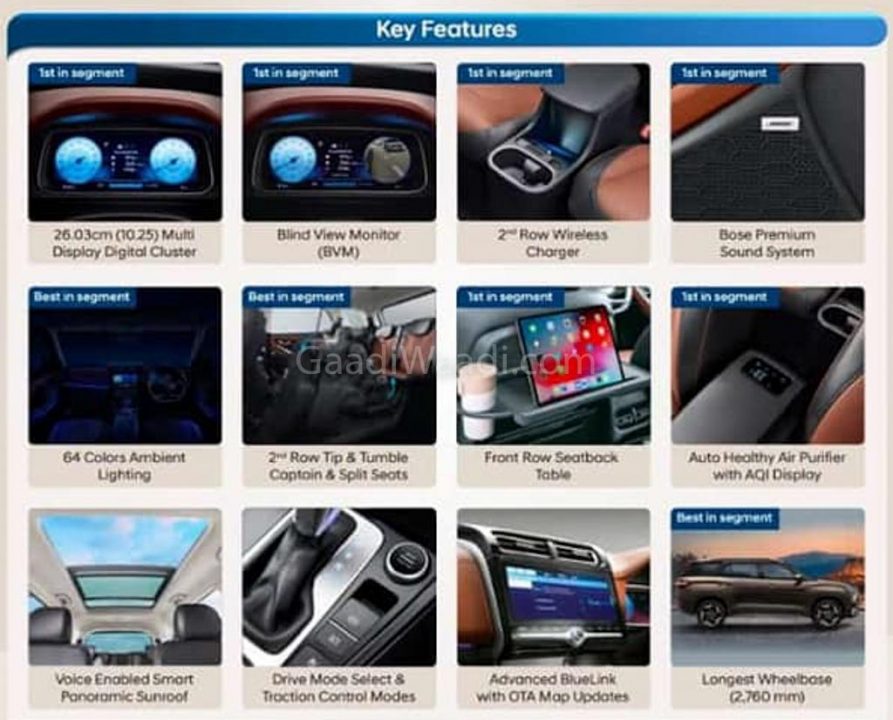 The Alcazar comes with another unique feature – folding tables behind the front row seats, with a retractable cup holder. This makes the second-row seats perfect for people who prefer being chauffeured around.

The Alcazar features a lovely black and brown interior theme, as opposed to the black and beige theme we see on the Creta. Personally speaking, the cabin of the Alcazar looks way more premium than its 5-seater sibling. 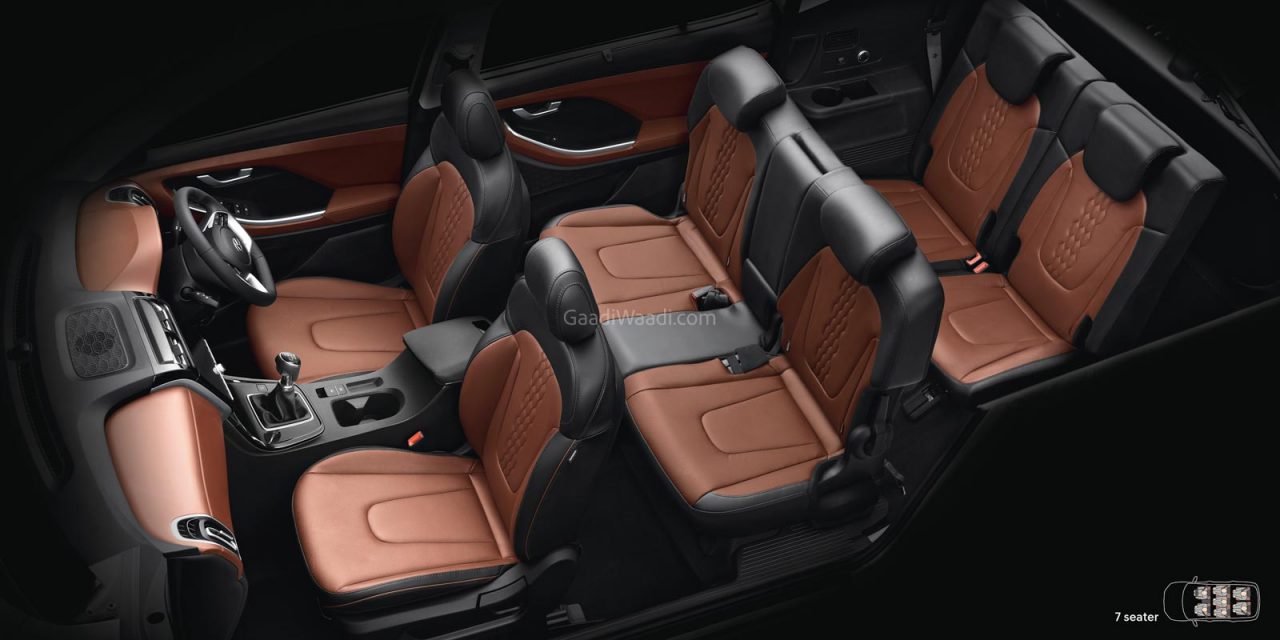 There will be two engine options available here. The first one is a 2.0-litre petrol unit, with 159 PS and 192 Nm on tap. The second one is a 1.5-litre turbo-diesel motor, which generates 115 PS and 250 Nm. Both the engines can be had with either a 6-speed manual or a 6-speed torque-converter automatic transmission. 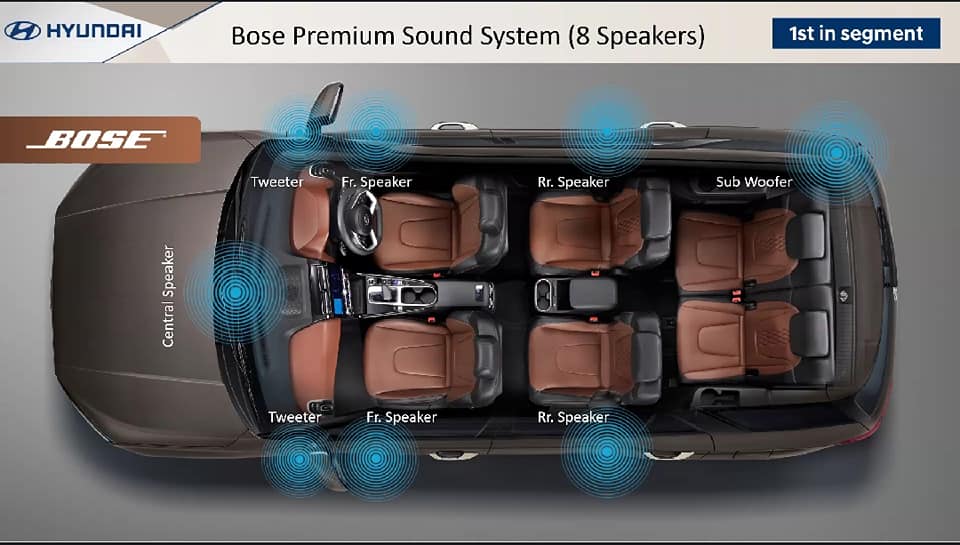 Another segment-first feature on the Alcazar is the Blind View Monitor (BVM). This system allows drivers to check their blind spot via the camera feed on the digital instrument cluster. For additional convenience, the SUV gets a 360-degree camera as well.

The Alcazar also gets ambient cabin lighting, with a segment-best 64-colour system. 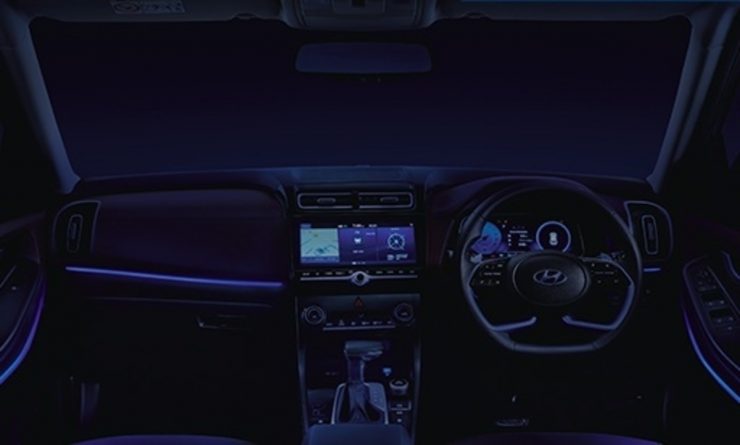 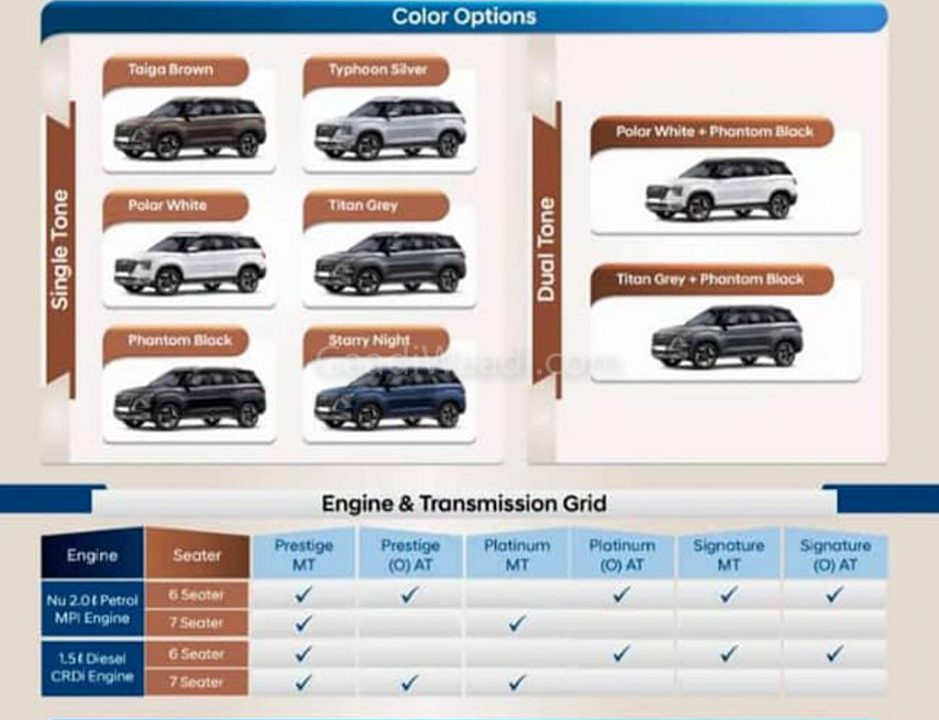 Hyundai is also offering a built-in cabin air purifier on the Alcazar, which also gets an AQI (Air Quality Index) display integrated into the centre armrest in the first row. This unit is the same as the one we see on the Creta. 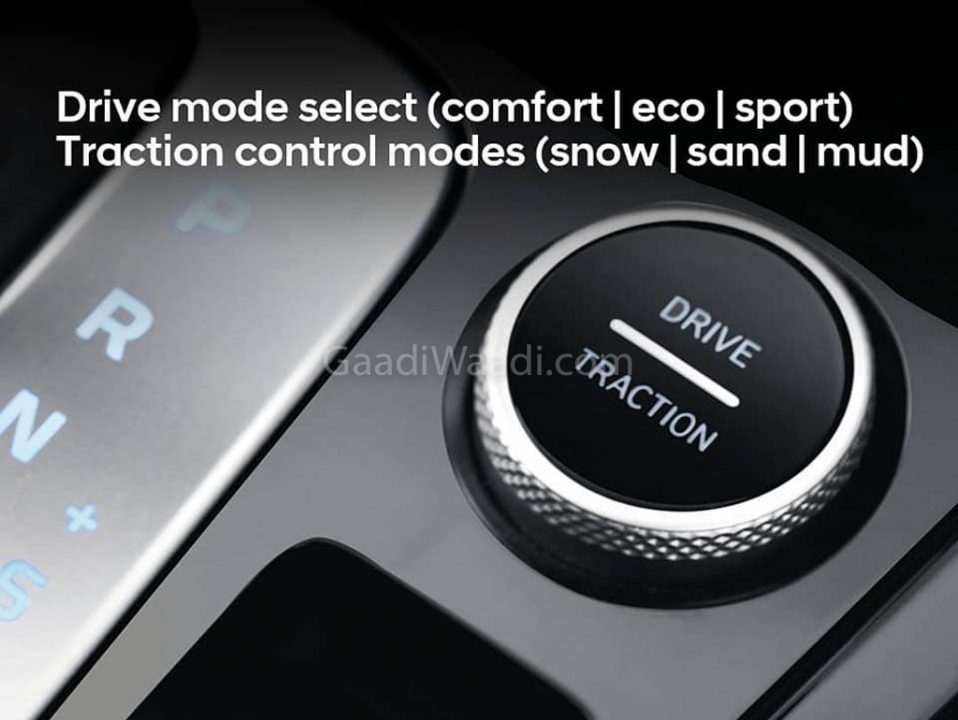 There are three driving modes available on the Alcazar – Sport, Comfort, and Eco. Apart from that, there are three traction control modes as well – Snow, Sand, and Mud.

A sunroof is quite a popular feature among cars these days, and the Alcazar gets a massive panoramic unit. To make things even better, the panoramic sunroof is voice-activated.

Now that the SUV has been completely unveiled, we can thoroughly look around for all the changes in exterior design as well. The biggest change is at the rear; the LED taillights have been completely redesigned and the tailgate features a horizontal chrome strip in the centre. 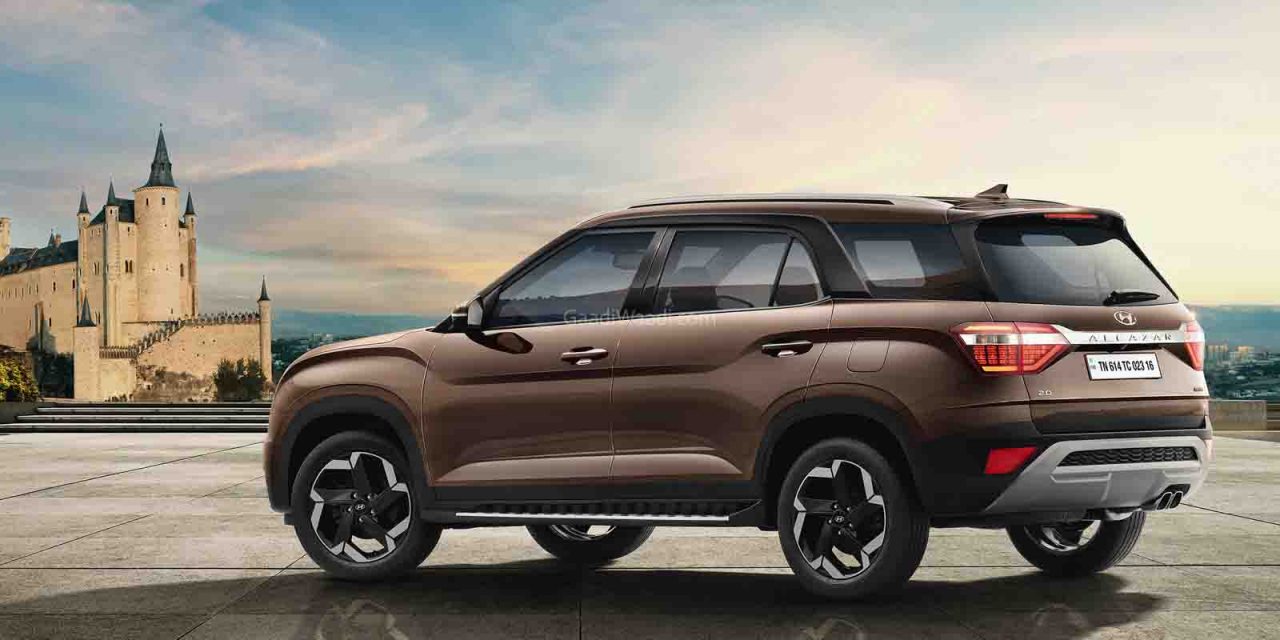