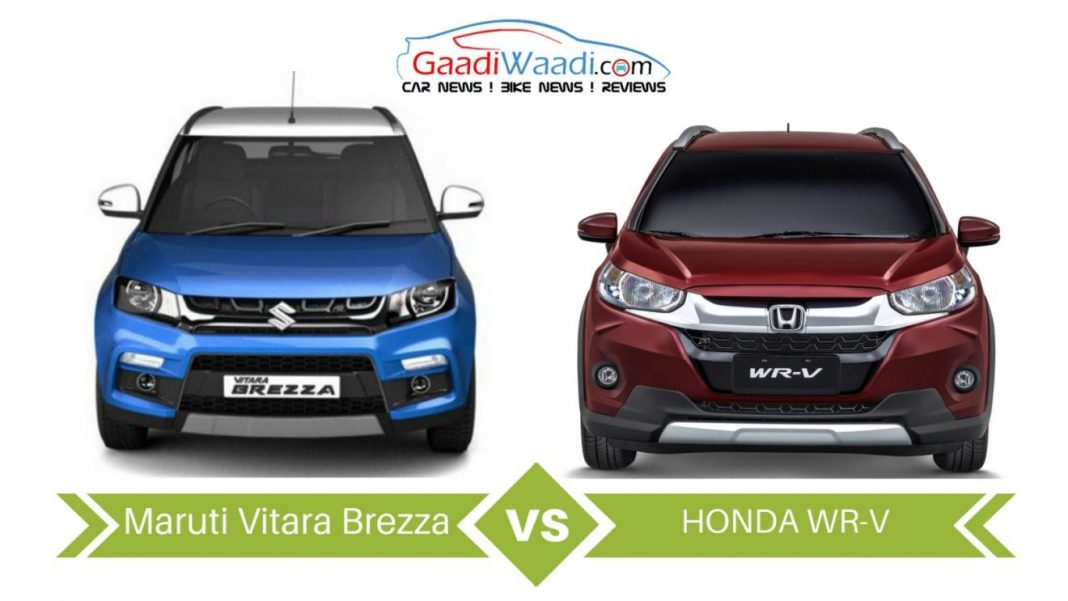 Honda Cars India has launched its new offering called the WR-V in the Indian market’s compact crossover segment. It is facing tough competition from several rivals and they are already well established. The main competitors against the Honda crossover include Maruti Suzuki Vitara Brezza and Ford EcoSport.

Maruti Suzuki introduced its Vitara Brezza compact SUV last year and within a very short span, the unique looking car garnered attention and positive response from the customers. Despite tough competition from rivals, the Maruti Suzuki Vitara Brezza has established itself as the most popular and bestselling model in its segment. It is a serious contender of all for the WR-V. 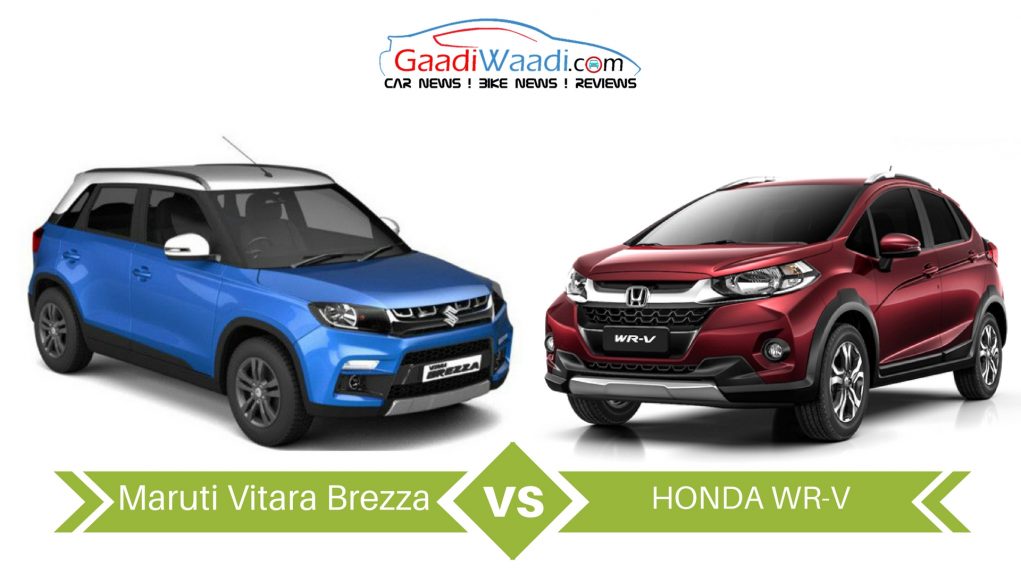 The Honda WR-V comes based on the premium hatchback Jazz. The crossover will be sold as a premium offering from the brand, but not luxurious. As Honda declared that it will be focusing on selling more premium cars for the Indian customers instead of mass market models, the WR-V arrives representing the same philosophy. The WR-V has been designed and developed keeping the emerging markets in focus and India being one of them is an utmost priority for the Japanese automaker.

Honda still considers HR-V is too pricey for the Indian customers despite being sold in several foreign markets. So, it came up with the WR-V, which sits below the HR-V for emerging countries to find a perfect balance. The production of this crossover began at the brand’s Tapukara plant in Rajasthan just a handful of months after the BR-V entered market and it goes on to show the commitment the brand has for India. 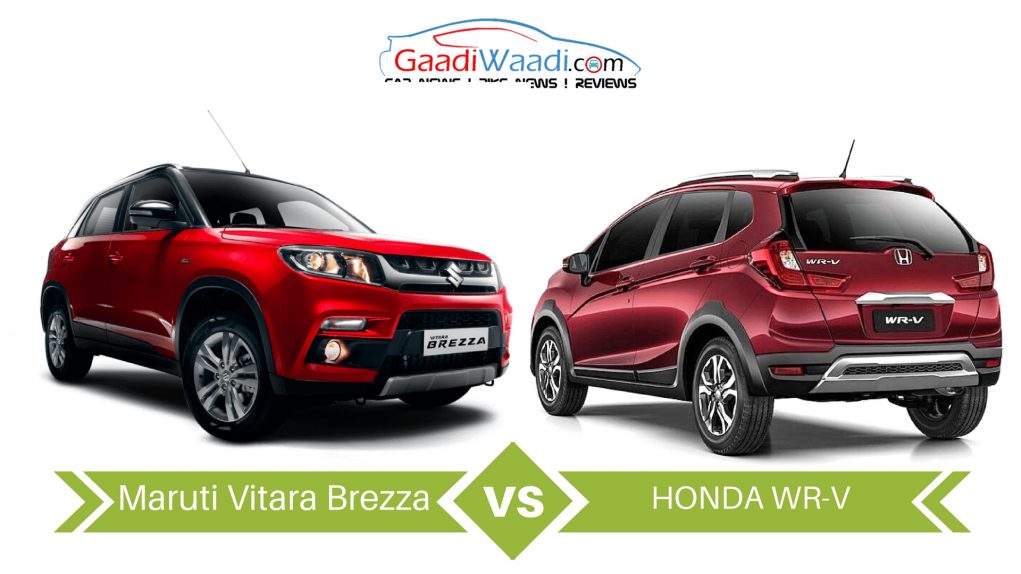 Honda has already started production of the crossover. The WR-V is based on the same platform as the premium hatchback Jazz. It also comes bearing design cues from its hatchback sibling. The WR-V appears quite muscular and delivers a bold aura. It gets sharp and wide headlamps with integrated L shaped LED daytime running lights and the headlights are connected by the Honda signature thick H shaped chrome bar on top of the front grille.

The front grille features an aggressive design and blends to the muscular front bumper. The front bumper looks beefy with the black cladding, silver skid plate and black surrounding around the fog lamps. Speaking about the clamshell hood, Honda has given it sharp and crispy creases running towards the nose section. Altogether, the entire front fascia appears with a bold and charming look.

Moving to the side profile, the Honda WR-V gets thick black body cladding, sporty design alloy wheels, turn indicator integrated ORVMs, blackened glass area. The similarity between the Honda Jazz and WR-V is visible through the deep cut running through the doors from behind the front fender and meeting the taillights. The chrome garnished door handles and sleek roof rails are other design elements enhancing WR-V’s style further. 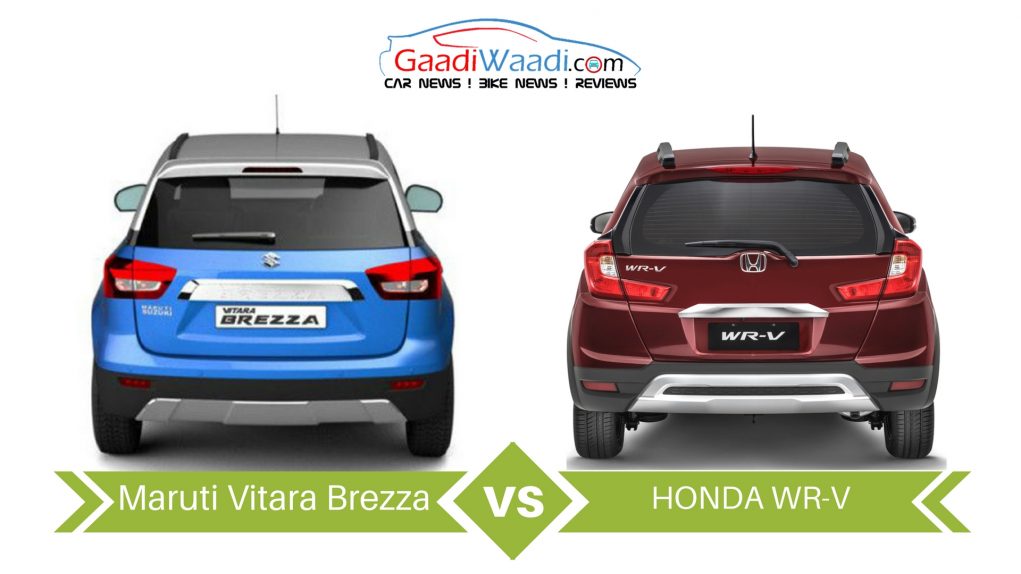 The rear profile of the Honda WR-V sports an integrated roof spoiler with high mounted stop lamp, C shaped taillights, chrome bar above the registration enclosure, chunky bumper with silver skid plate. Overall, the crossover comes with a package of blending between masculinity and style. But it lacks the sportiness, which is very much visible in its rival.

The H shaped chrome garnished grille along with bold mesh at the front grille enhances the appeal of the car to another level. The front bumper of the compact SUV features a large air intake, a skid plate and above all a very large and muscular appearance. The horizontal LED lights and round shaped fog lamps below them not only increase he practicality of the Vitara Brezza, but add zing as well. 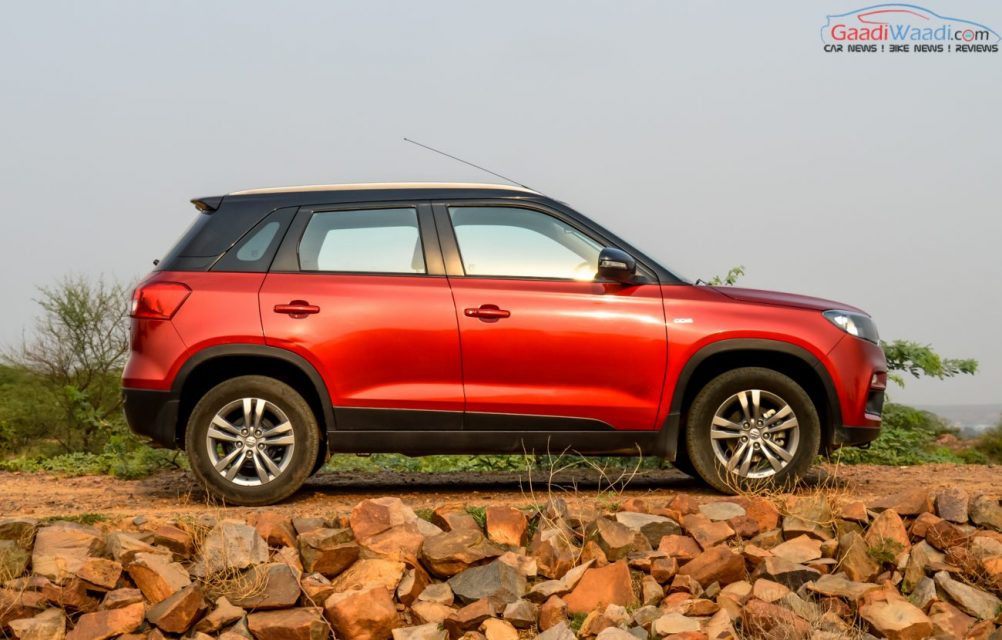 At the side profile of the Vitara Brezza, most striking design language is the dual tone exterior paint. This truly grabs attention at the very first glance. Apart from that, the turn indicator integrated ORVMs, unique shaped wheel arches with black body cladding and multi-spoke alloy wheels are other features increasing the SUV’s sporty style further.

The rear profile of the Maruti Suzuki’s compact SUV gets an integrated roof spoiler with high mounted stop lamp, wrap around compact taillights, chrome bar above the registration enclosure, a chunky looking bumper with black cladding and a silver skid plate as well.

The Indo-Japanese auto manufacturer has done a nice job while designing the Vitara Brezza. Being the largest and most popular car brand of India, the company has been able touch the pulse of the new age young customers with the unique and energetic design of the compact SUV, which lacks in the WR-V. 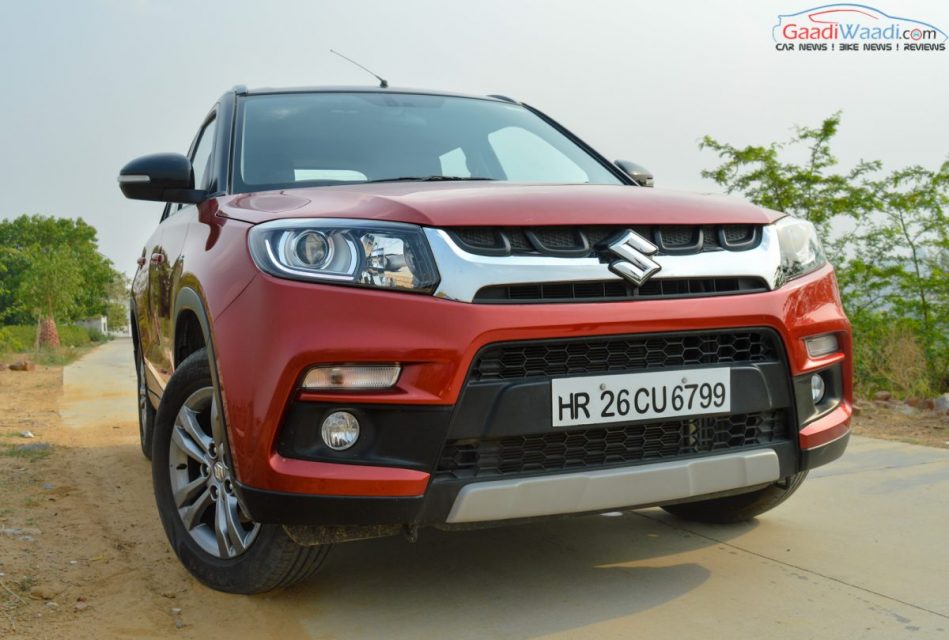 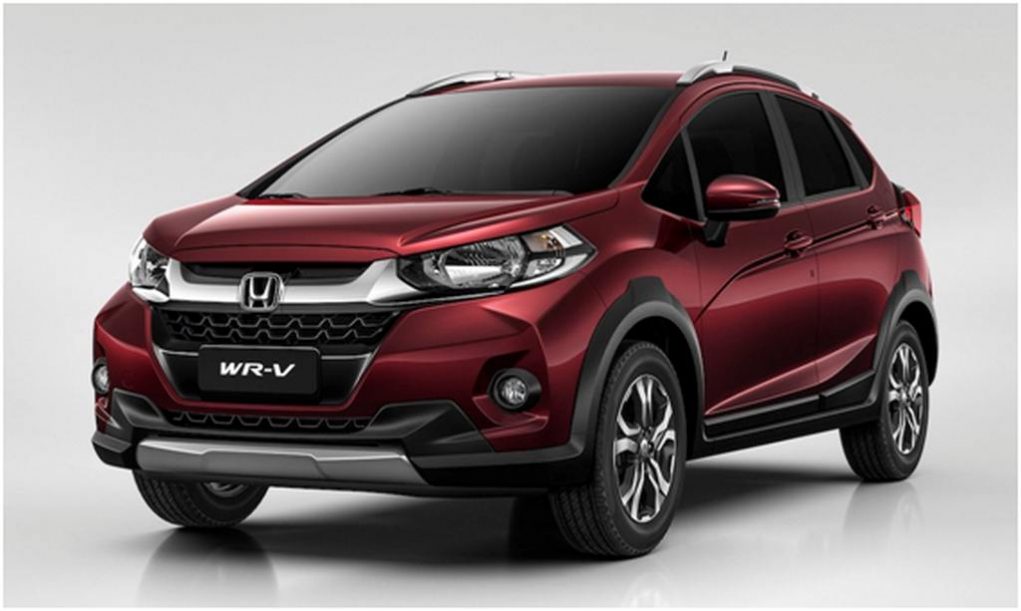 The WR-V loses out to Vitara in width, height, wheelbase and ground clearance. But it is longer by 4 mm and has additional trunk capacity.  Hands down, the Maruti SUV wins in this aspect but comparing to Jazz, the WR-V has 25 mm longer wheelbase, due to a new suspension mounting, and offers 23 mm more ground clearance than its hatchback sibling.

The boot space has been increased by 9 litres to 363 litres but it doesn’t get 60:40 seats or the Magic seats present in Jazz. Overall, the WR-V crossover is 44 mm longer, 40 mm wider and 57 mm taller comparatively giving more cabin space, leg and head room inside. 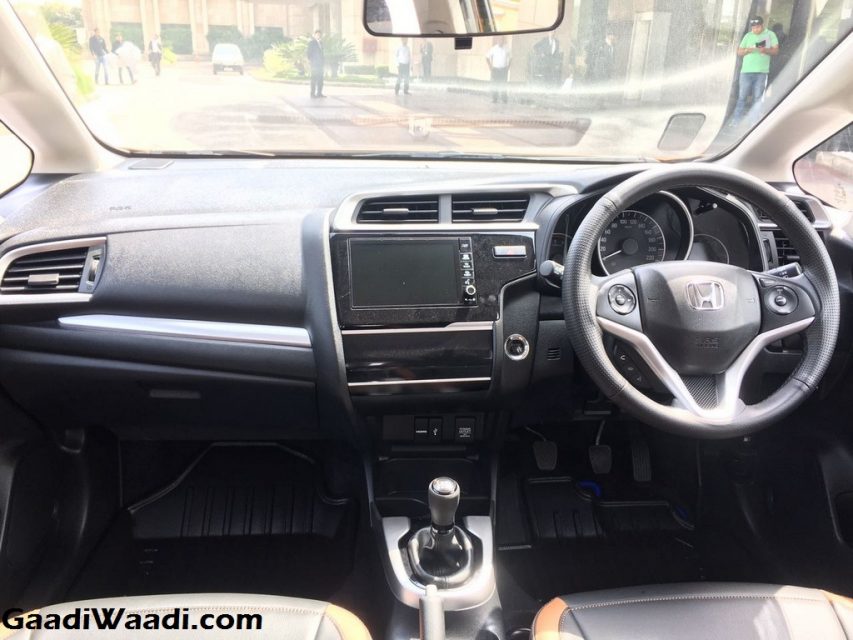 The Honda WR-V will arrive with an upmarket interior. It would come featuring a sporty black theme. The cabin gets a three-spoke multi-function steering wheel, three-pod instrument cluster with analog dials and a digital MID. The black dashboard sports a touchscreen infotainment system at the centre console. The AC vents come with silver detailing around them.

The suspension duty is done by MacPherson struts up front and a twisted torsion beam at the rear. The front wheels have ventilated disc brakes while the rear wheels get drum brakes. The VX variant will features a 16-inch diamond cut alloy wheels shod on 195/60 R16 tyres.

As Honda is trying to offer a stylish and upmarket car through the WR-V, it gets good quality materials on seats and upholstery. In terms of space and comfort, expect decent leg space from this car. Honda is likely to offer a comfortable experience for the customers, as the demands of the domestic customers have changed a lot from before.

Now, they not only look for a basic means of transportation, but a complete package with loads of features, practicality, premiumness and style. Speaking about the demanding changes, Maruti Suzuki seemingly knows what the buyers want. This is why the brand has designed the Vitara Brezza focusing and giving priority to the needs of the customers. Specially, the company has targeted the millennial buyers who love uniqueness rather than just a basic car. 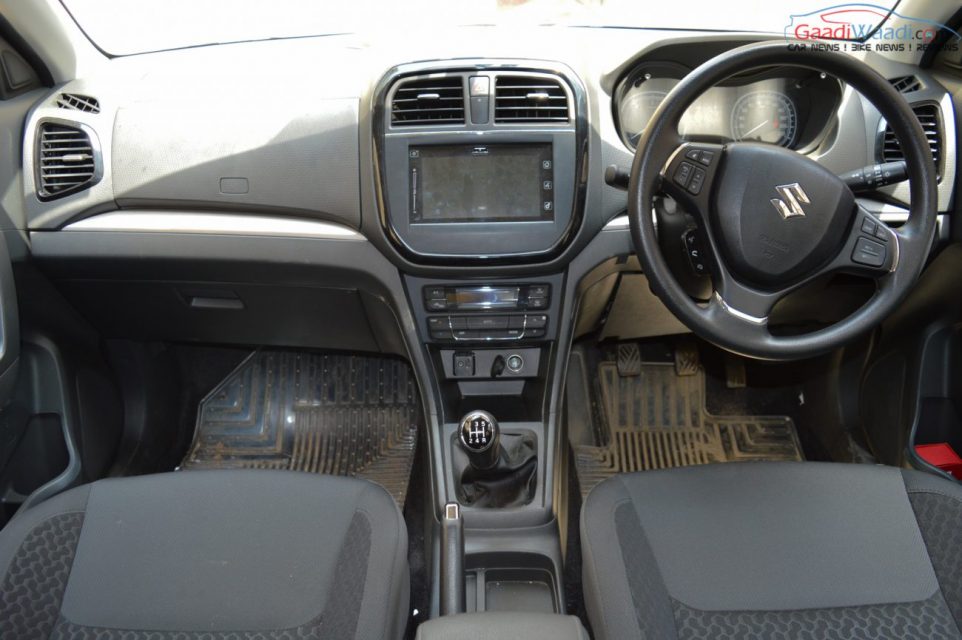 The mood lighting feature at the instrument cluster is a feature, giving the compact SUV’s cabin a premium feel. In terms of space inside, the Maruti Suzuki Vitara Brezza comes quite impressive. But judging by equipment and safety, the WR-V comes out on top with an upmarket looking cabin.

Honda WR-V is available in both petrol and diesel engine options. The two petrol variants of the crossover get a 1.2-litre i-VTEC engine under the hood paired with a 5-speed manual gearbox. The engine is capable of churning out 90 bhp of peak power and 110 Nm of peak torque. There won’t be a CVT gearbox on offer with the petrol model disappointingly.

The diesel powered WR-V on the other hand will come with a 1.5-litre i-DTEC engine under the hood. This diesel engine will come mated to a 6-speed manual transmission and kick out 100 bhp of peak power and 200 Nm of peak torque.

The Maruti Suzuki Vitara Brezza on the other hand is currently available in only diesel option. The lone diesel engine on offer with this compact SUV is a 1.3-litre DDiS turbocharged unit. Transmission duty is done by a 5-speed manual gearbox and the engine pumps out 89 bhp of peak power at 4,000 rpm and 200 Nm of peak torque from 1,750 rpm. The engine returns an impressive fuel efficiency of 24.3 kmpl.

Maruti Suzuki is currently working on a petrol variant of the Vitara Brezza, which will come powered by a 1.0-litre powerful and fuel efficient Boosterjet turbocharged engine. Here on the powertrain front, the Honda WR-V gets an edge over the Maruti Suzuki vehicle, thanks to the petrol engine on offer. But after Maruti Suzuki Vitara Brezza petrol variant arrives in the domestic market, the WR-V will face tough competition. Crucially, the Earth Dreams diesel engine will have ARAI certified mileage of 25.5 kmpl which is 1.2 kmpl more than Brezza’s DDiS motor.

The main safety features include ABS (Anti-lock Braking System) with EBD (Electronic Brakeforce Distribution) and dual airbags as standard while multi-angle rearview camera and brake override system are also made available. On the other hand, the Maruti Suzuki Vitara Brezza also comes with loads of safety features. It gets ABS with EBD, dual front airbags, front seat belts with pre-tensioner and force limiter.

The compact SUV and crossover segment in Indian market is one of the most competed and toughest spaces, where almost every auto manufacturer present are trying to grab a good share. Honda being a long standing brand is also eyeing to get a good share in the segment, and thus comes the WR-V crossover.

As the Japanese automaker already said, it wants to sell premium cars in the country. The WR-V will offer the domestic customers a taste of upmarket commuting. It comes with a bulky design and several attractive features inside the cabin.

Maruti Suzuki Vitara Brezza has already established itself as a very popular and bestselling model in the segment. It comes with attractive design, loads of upmarket features inside the cabin and a very efficient engine. The absence of petrol engine is also about to be gone, as the company is preparing to launch a petrol variant of the car as well. Apart from that, the Vitara Brezza appears to be capable of little bit of off-roading also.

Pricing plays a very crucial role here. Maruti Suzuki offers the Vitara Brezza within an affordable price range while Honda has managed to position the WR-V competitive as well. Besides that, the Maruti Suzuki brand name will also play a vital role in the rivalry between these two cars. Finally, we can say that the task for the Honda WR-V won’t be easy against the Vitara Brezza. On paper, Honda seems to have got everything right in terms of looks, performance, features and cabin space along with first-in-class sunroof which we reckon leads on to a neck-to-neck rivalry like City vs Ciaz in the compact SUV segment.