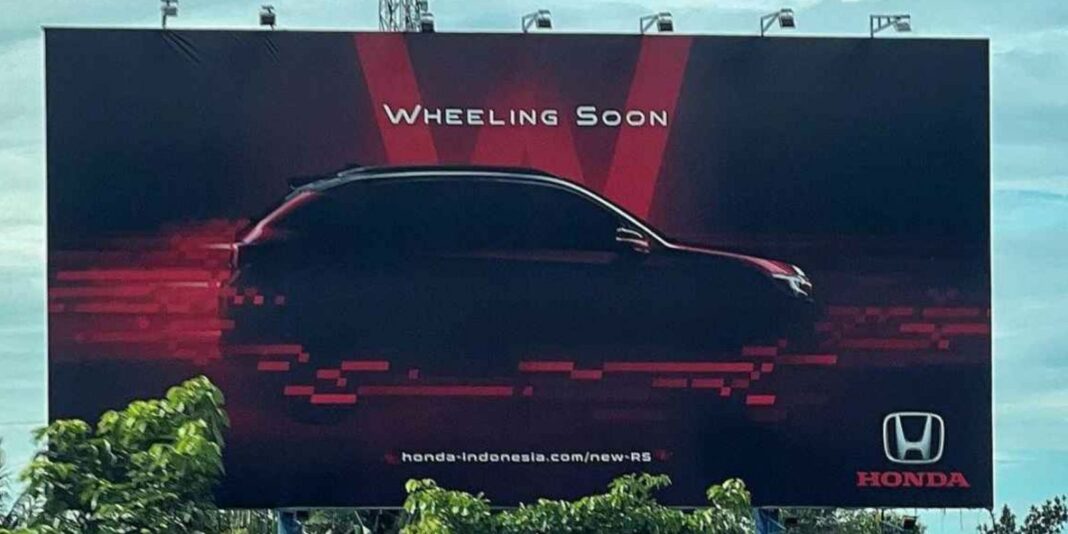 Honda has released the first teaser image, a rather big one literally, for the first time. Instead, of posting it online, the Japanese manufacturer has taken it directly to the roads, and that too literally. Yes, the upcoming SUV has been spread out on a billboard in Indonesia with the words “wheeling soon” – suggesting that the global unveil is sooner rather than later.

The new Honda RS is expected to be a production version of the SUV RS concept displayed at the 2022 Gaikindo Indonesia International Auto Show and it may as well carry the WR-V nameplate but no official details have been divulged yet. It will be launched in Indonesia before reaching other Southeast Asian markets and ahead of it, the roadshow of the camo’d prototype is done and dusted.

The billboard shows the new RS SUV finished in a two-tone shade (red body and black finished pillars, roof and outside rearview mirrors). You could also see the forward dipping bonnet structure along with a raked front windshield and a large greenhouse. The LED headlamps appear to be sharp and a pair of wraparound LED tail lamps can be seen at the back.

As for the dimensions, it could have an overall length of around 4.2 m and the wheelbase length could be similar to that of the fifth-generation City. It will have to be waited and seen whether the Indonesia-spec midsize SUV has anything to do with the upcoming 2024-bound midsize SUV for India. It may as well have several commonalities with the City midsize sedan.

In Indonesia, it will likely derive power from a 1.5-litre four-cylinder i-VTEC petrol engine while a hybrid/petrol unit could also be employed. It will take on five-seater midsize SUVs such as Hyundai Creta, Kia Seltos, and the likes. As for India, Honda will introduce an all-new compact SUV by the middle of the next calendar year.

It is expected to be based on the Amaze’s platform while the midsize SUV, which could be launched in early 2024, will sit on the same architecture as the City.