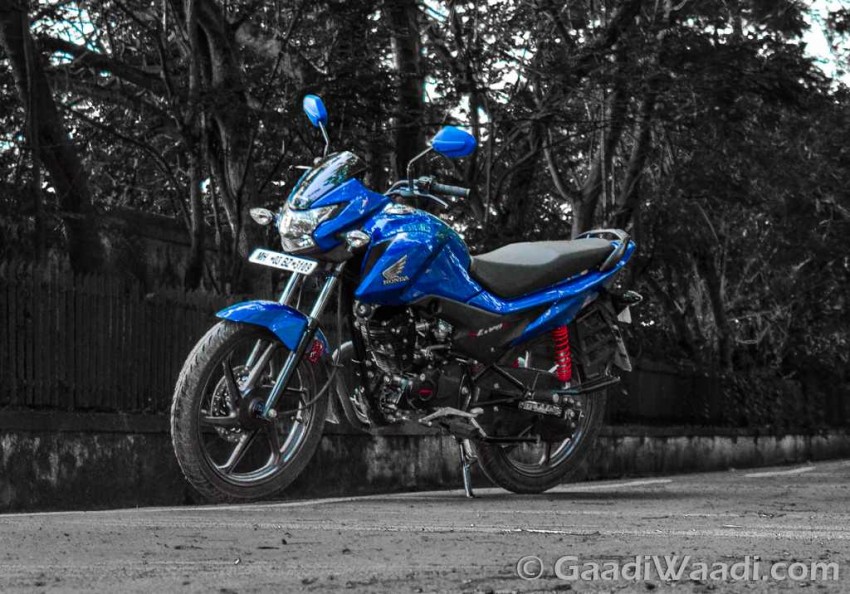 Honda Livo is a very important bike for Honda as it comes in the 110cc segment, with targeting urban men with its package. Honda Livo has a lot going for it and while we were testing it even the public responded to it extremely well. How is it? Well, we put over 200 kms on it to find out whether its time to live or not.

This is where the Honda Livo absolutely shines. The all new styling thanks to tank shrouds, new compact and curvy headlight along with the muffler design from the Unicorn 160 give it a very substantial look overall. Headlight cowl is well sculpted along with huge visor gives it a very different appeal than most bikes in this segment. 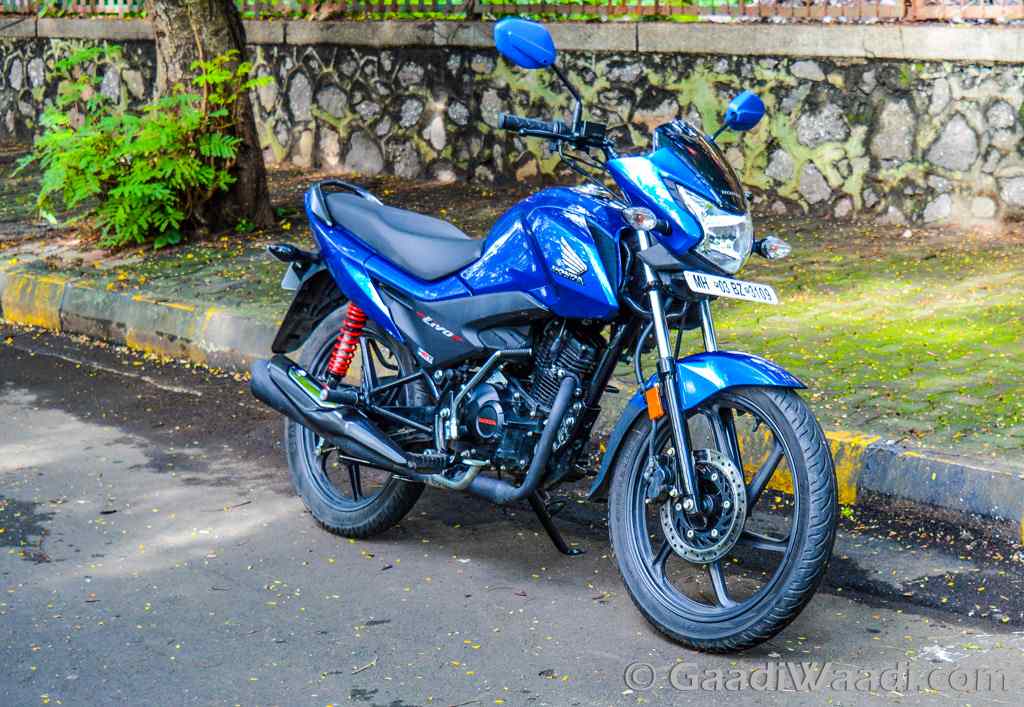 Paint job has improved considerably over previous models and it shows once we prepped the Honda Livo for the shoot post a nice power wash. A body devoid of graphics always looks good too. 3D badge Honda badge gives it the premium touch and grabs attention. Matt finish mirrors which are based on which body color you choose is a good idea as they feel and look good to touch and see.

Honda Livo impresses with its styling, a new engine character and along with spectacular brakes and dynamics makes it a very different Honda, compared to the past 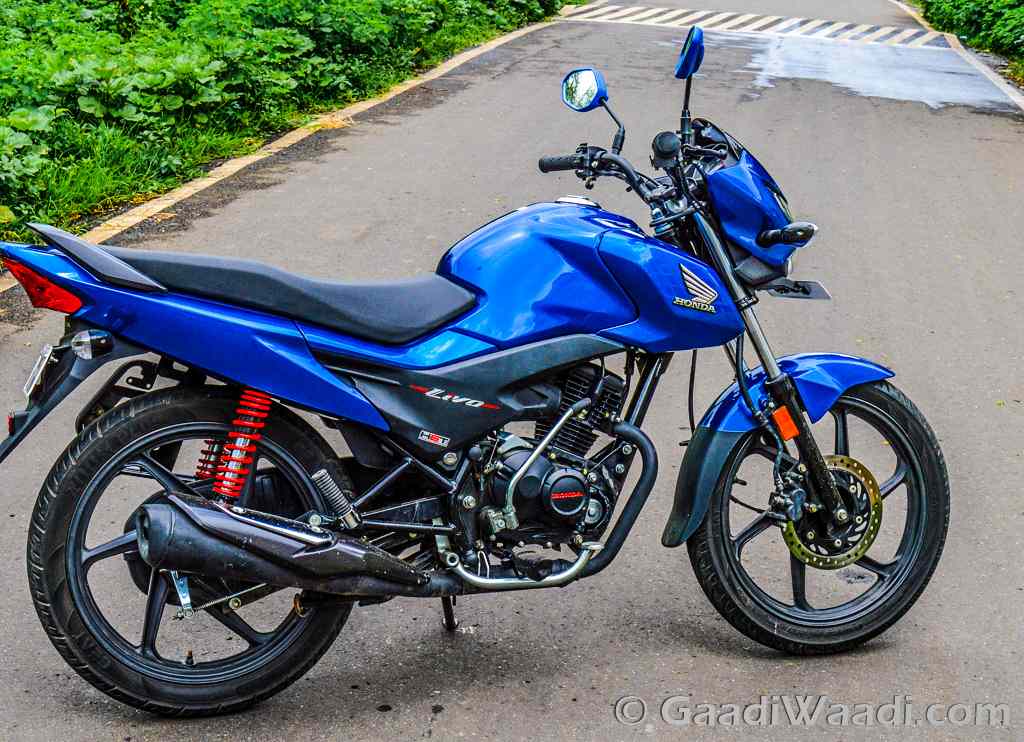 Faux plastic on the side of the Honda Livo to hide chassis has become a fashion nowadays and has been premium bikes as well. What we like the most is the graphite finish on the grab handle at the rear which looks really impressive.

Clear lens indicator along with reflectors on the front suspension add to the premium package. Overall, a very sharp, high quality motorcycle with good levels of fit-finish is here to woo urban commuters. 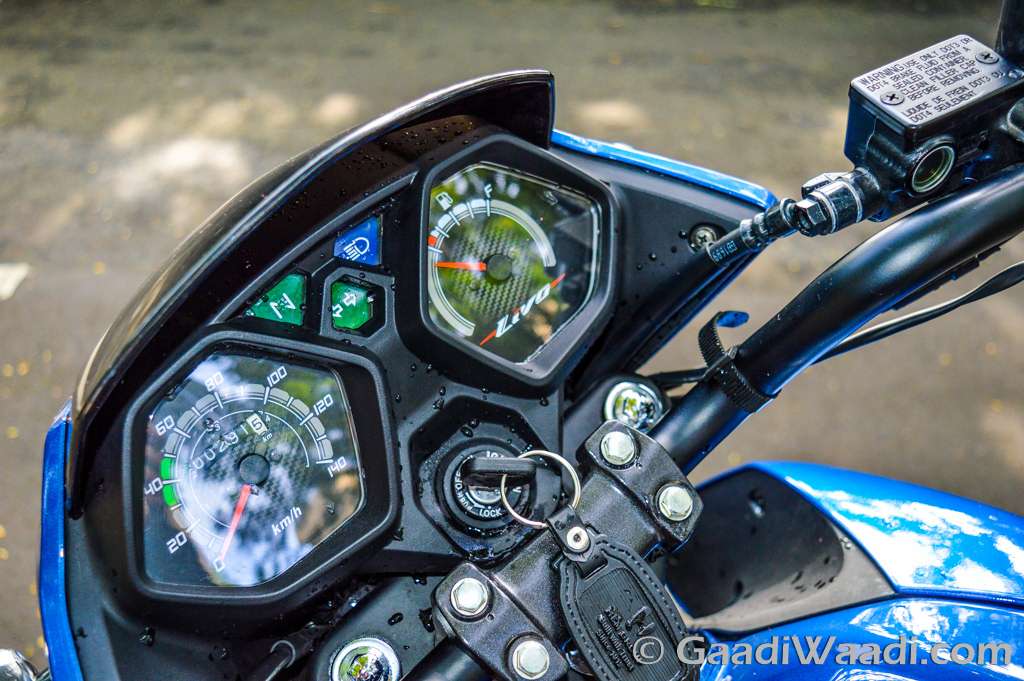 The less we talk about this part is, the better. There are no features whatsoever over the except the basic lights. No solitary turn indicators, no tachometer whatsoever. However, fonts and graphics are well-chosen and certainly looks good.

The pods of the Honda Livo resemble to the mirrors that the bike has. Switchgear is the infamous unit, which continues to get endless criticism, but Honda refuses to acknowledge it and this type of switchgear is even present on the Fireblade, so there’s no point shouting about it either. 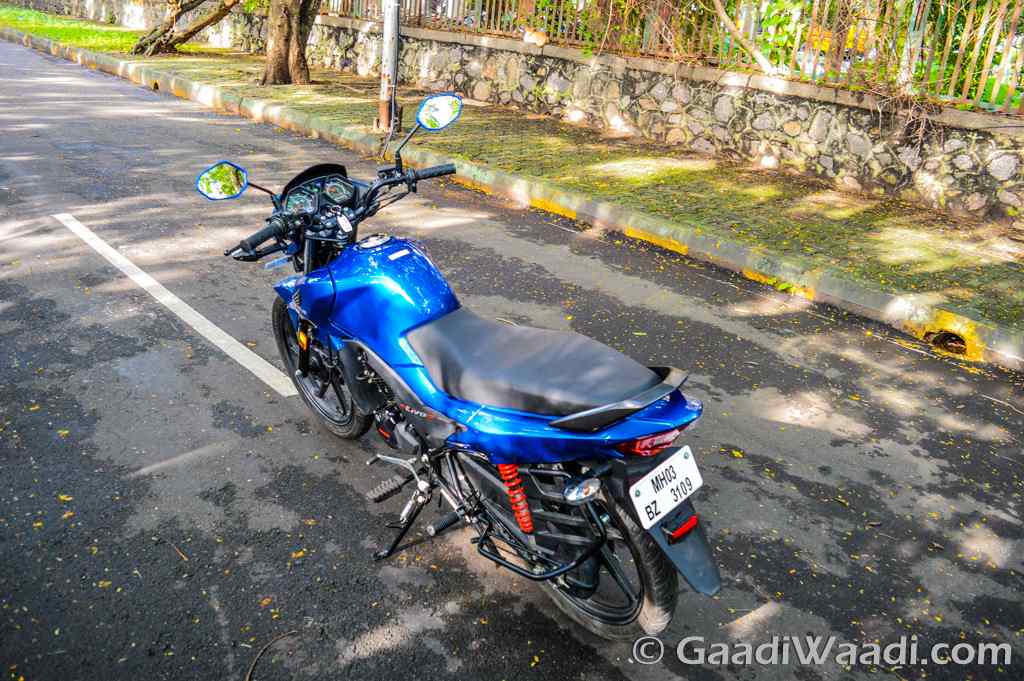 It’s a typical commuter which means you sit on the Honda Livo and the visibility is great all around. Upright riding position with handlebar coming to you gives you a comfortable position. Well padded seats with seat height suiting most Indian rider height is spot on. Rear view mirrors are great and they support even big riders despite wearing jackets.

Footpegs aren’t entirely set front pegs and they are between which you confidence will taking the twisites and support your posture for long journeys. Pillion comfort is good as well positioned footpegs, good amount of space and that beautiful looking grab handle to hold on too. 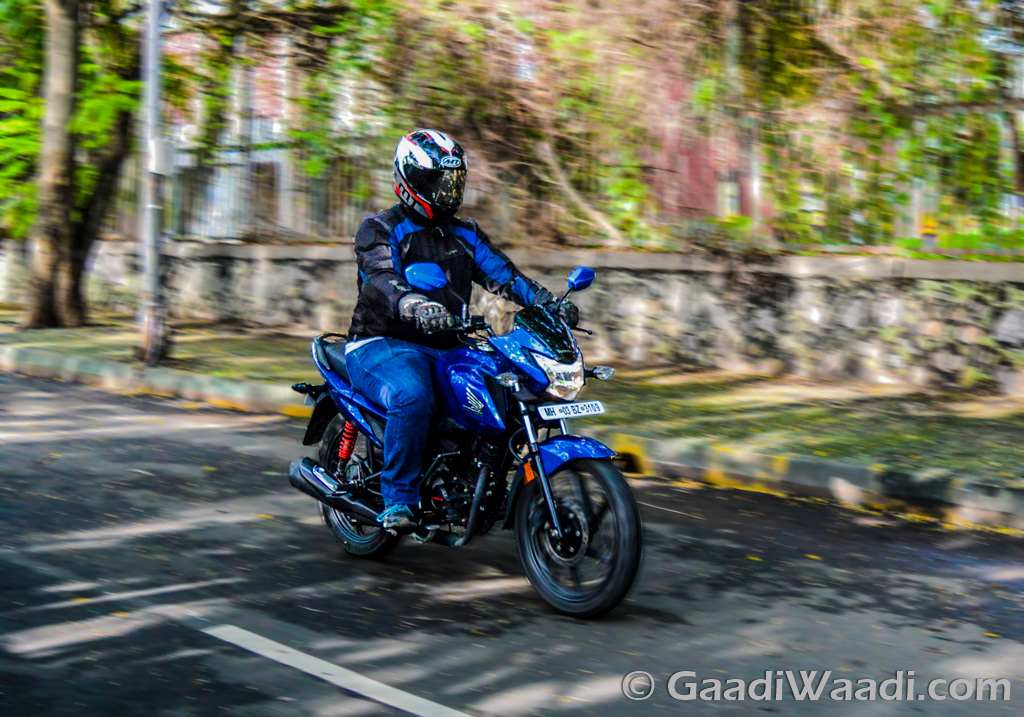 Now this is where the most of the changes lie. Honda has completely reworked the engine on the Livo to extract the best out of it. The Livo produces 8.25 BHP of power and 8.63 Nm of torque. The engine is smooth and refined all the way till redline. The engine is bit vibey in the top-end and so are most of the commuters out there. What’s special is the engine character, that has changed dramatically.

The torque, smooth punchy nature is gone. It has a very thrumy intake note and a metallic exhaust note along that is associated with this new engine. This was never the case with any Honda bikes we have tested over the years. The fuel reserve knob has changed drastically and it needs to be studied at the dealership before operating.

Livo feels a bit under-powered but when the engine opens up, it is helped by a small margin

Coming to the performance, since the engine is feeling new it does not feel powerful as other 110cc motorcycles Honda makes. It feels considerably under powered despite having class leading power and torque figures. 111 kerb weight can be blamed slightly, but it is a typical Honda when it comes to powerband. There is no initial torque in the lower gears and there is a subtle amount of mind range in higher gear. Top-end is poor thanks to taller gearing of the overdrive gear. Even when given a complete empty stretch of road it refuse to go over 82 km/hr despite a 70 kg rider on-board. We got a mileage of 50 km/l because we were keeping the engine at boil. Also the engine is new and of course, with sane riding it can deliver 60 km/l quite easily. 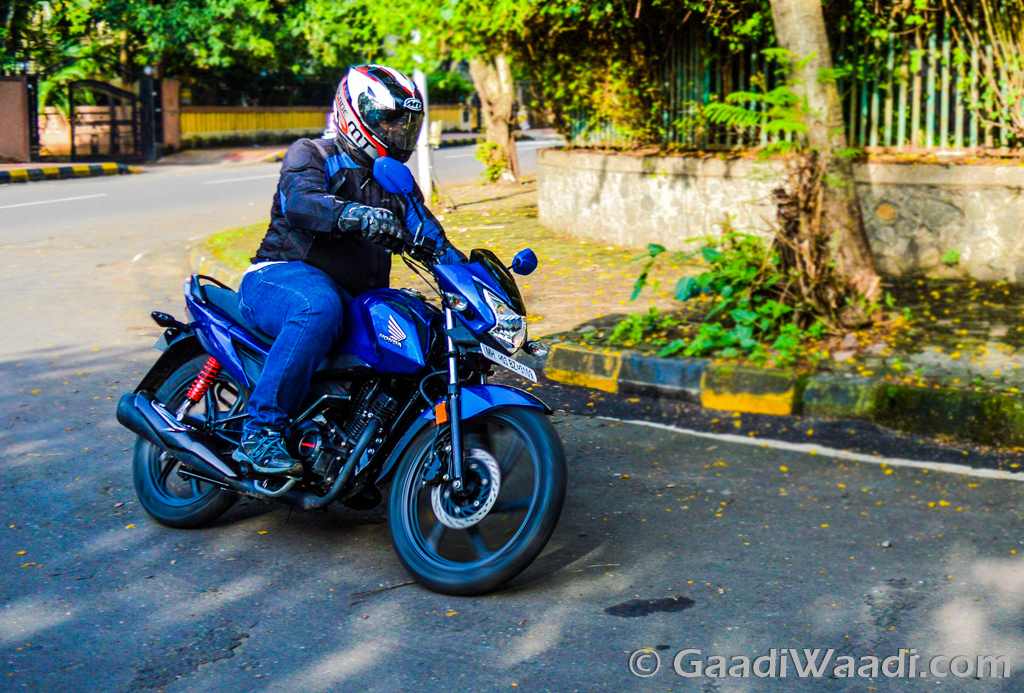 Mechanically everything is similar like commuters from the stable. Diamond frame with adjustable rear suspension and telescopic forks at the front. Honda claims it has the longest wheelbase and it is right. The long wheelbase helps in excellent ride quality and high-speed stability the Honda Livo has.

However, that long wheelbase has downsides. Maneuvering in tight spaces is a task and getting between two vehicles isn’t easy as steering is limited due to long wheelbase. U-turns radius is more than expected, and isn’t ideal for city bike which does this frequently.

Long wheelbase has its positives and negatives. Stability in corners and straights is good, but the steering is restricted in very tight traffic situations

Long wheelbase also means it is the downright stable in mid corner and turn-in despite that, is quick enough. Tyres are good enough surprisingly, because they are from Ceat. Overall, a good handle with composed nature and easy to ride in city and moving traffic, but not that great when things get crawling in our congested cities. Braking performance is spectacular as the disc brake in the front along with a powerful rear brake makes stopping distance quite less. 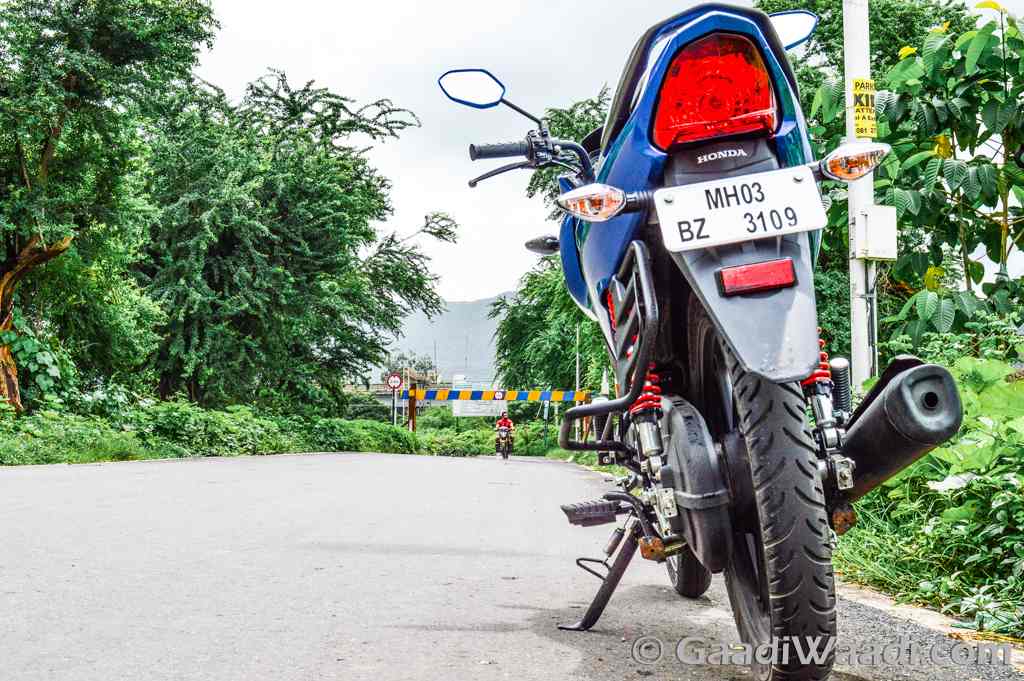 It’s quite simple. The Honda Livo does the job of commuting like any other motorcycle from the stable and has really attractive styling and comes at a value for money price. Honda seems to work hard on every aspect to get these rights and it actually does while strengthening its forte’s.

Equipment level is scarce but you get top-notch mechancials and bullet proof motor from Honda. The competition is well equipped and offers even more bang for your buck, but if you are in for an urban Honda motorcycle and if you are looking for twist in the story, this could be the ideal bike you are looking for.